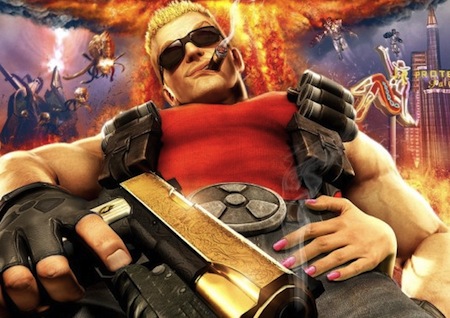 As noted by TouchArcade, popular yet never released console and PC game Duke Nukem Forever might be coming to iOS devices, too. Duke Nukem Forever is particularly interesting as a title as it’s become synonym of vaporware online: development started in 1997, but the game never actually came out (in spite of promotional material and screenshots being handed out to the press and fans) due to multiple delays from the original developers, 3D Realms. If you’ve been following Duke Nukem Forever’s history throughout the years, you know that the brand’s userbase came to the point where many lost any kind of hope in seeing the game officially out: that was until 2010, when game studio Gearbox revealed they had picked DNF off 3D Realms’ hands and were busy working on a full adaption and rewrite for current-gen consoles. They announced a release date for May 2010, but the game was delayed again. It should be finally coming out after 14 years on June 9, 2011, and it’s already available for pre-purchase on Steam.

Digging into the game’s manual, a TouchArcade reader found out the developers included “Apple App Store Additional License Terms” – a bunch of legalese that most gamers usually skip, but it’s intended to inform users about licensing terms, agreements, and so forth. This could mean a mobile version of Duke Nukem Forever is also in the works, which wouldn’t be surprise considering the App Store userbase nowadays and the fact that the Unreal Engine runs on iPhones and iPads. Gearbox hasn’t confirmed they’ll use the Unreal Engine in the game, but that’s a possibility if DNF is really being ported to iOS devices. As TouchArcade notes, the license terms might also refer to the Mac App Store, although Gearbox specifically stated there weren’t any announcements related to the Mac or Linux platforms – and the terms clearly mention the iPhone and iPod touch in regards to the software license.

After all these years, it’d be nice to see the Duke on the iPad.