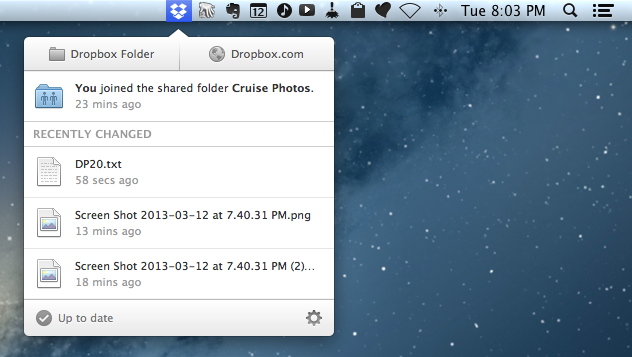 Dropbox has today released an update to its desktop client for Mac. The new version of the app has been available as beta on the company’s forums for a few months, and the final build can be downloaded here.

The new Dropbox for Mac comes with a redesigned menubar tray with a timeline of the latest changes in your Dropbox account. Back in September, the company tried to introduce a new menubar design with another beta on the forums, but the concept was abandoned as it didn’t meet the expectations of several Dropbox users. Inspired by the minimal design of the new Dropbox for iOS, the Mac app now comes with an iOS-like popover that contains two large shortcuts for your Dropbox folder in the Finder and dropbox.com at the top, a timeline of changes, and sync information at the bottom.

The key to the new tray is that files can be clicked to be opened directly in the Finder and shared inline without leaving the app or bringing up a contextual menu. Upon hovering over a file, in fact, a “Share” button will appear: you can click it to instantly generate a Dropbox link that will open a new tab in your browser and that you can immediately send to someone else. Besides sharing, you can also accept a shared folder invitation directly from the app: in my tests, notifications of folders that had been shared with me arrived simultaneously on iOS and OS X, allowing me to accept them without having to use the Dropbox website.

Different filetypes come with different preview icons (image thumbnails will show an actual preview of the image), and the “Up to date” checkmark icon doubles as spinning refresh indicator when files are syncing to your Dropbox account (it also “pulses” when sync is complete – a nice touch). While network speed isn’t shown in the popover while syncing, you can view it by clicking the Preferences icon at the bottom of the window (which will open a contextual menu showing both time remaining and speed).

As a side note, you can still get the old Dropbox 1.0 menu by Control-clicking the Dropbox icon in the menubar.

After months of iOS and web updates, it’s nice to see Dropbox focusing on desktop clients again. I believe the new Mac app is a great improvement over the old version, especially in terms of how quickly you can share new files and open them in the OS X Finder.