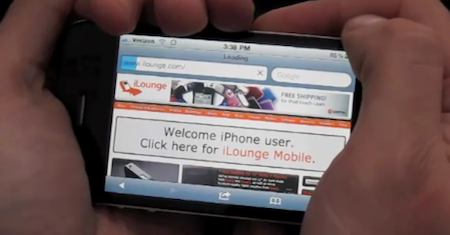 Antennagate is over, right? Steve Jobs told everyone that just about any phone suffers from signal attenuation if you cover the antenna with your skin, and people who had issues with their iPhone 4s got a free Bumper case to resolve the “Death Grip” problem. And Apple’s 2010 numbers tell us Antennagate wasn’t really a problem for iPhone sales.

Still, someone is saying Death Grip is still alive, kicking and affecting the mythical Verizon iPhone’s antennas. Not just the 3G radio antenna, the WiFi one as well. How’s that possible? That’s the magic of the Death Hug, a new kind of grip that can be activated with two hands wrapped around the phone and its screen. Look at the video below. It’s a full-phone hand hug.  iLounge reports:

The problem with Wi-Fi reception appears when the device is held snugly in landscape orientation with two hands, a position common when playing games or using the widescreen keyboard. Prior to the Verizon iPhone 4’s launch, sources told iLounge to be on the lookout for the issue, which was being referred to as the death hug.

We’re just going to leave you with the Youtube video after the break. But let me say that, frankly, that’s one kind of grip that requires some serious skills. Honestly, we at MacStories don’t hold our phones like that. But then again, we don’t disdain hugs either.