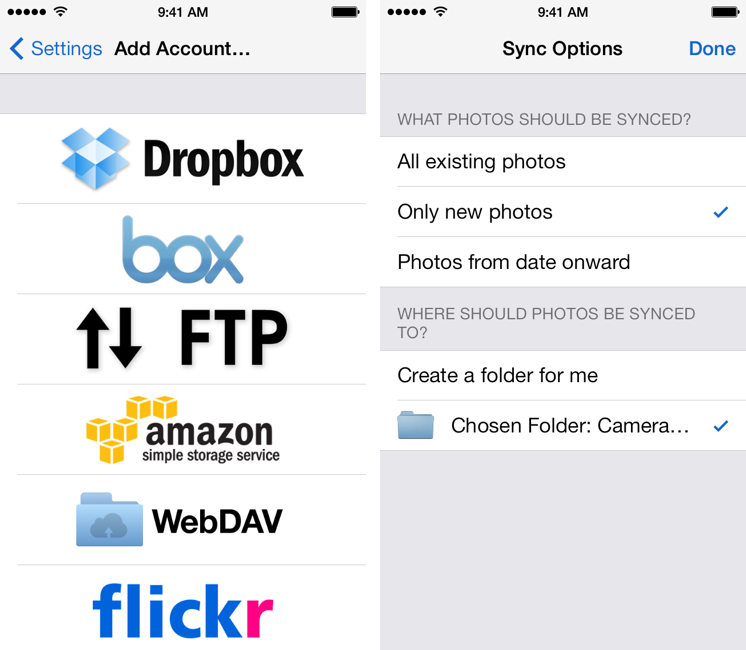 In my Boxie review yesterday, I mentioned the role of the official Dropbox app on my devices:

Boxie is so feature-rich, I want more from it: there’s no iPad app at this point, and I would love for Tapwings to consider an automatic upload feature for photos that would allow me to completely eschew the official Dropbox app. Right now, the only reason I keep Dropbox on my devices is for the iPad client and automatic background uploads, but, for everything else, I’m doing just fine with Boxie and I enjoy the increased efficiency made possible by the app’s feature set.

I should clarify two points: the Dropbox app is also the easiest way to authenticate with your credentials for third-party Dropbox-enabled apps; and, in a sweet coincidence, CameraSync has been updated today with a new design and bug fixes for iOS 7, which means I have turned off Camera Uploads from the Dropbox app again.

You may remember CameraSync from last year, when I noted how it provided a better background photo upload feature set than Dropbox:

CameraSync’s interface design isn’t the prettiest one around, but the app is extremely useful and well-done (plus, the icon is sweet). CameraSync can upload photos and videos to a specific folder on Dropbox, but it also supports SkyDrive, FTP, Amazon S3, Flickr, and Box.net. As you can imagine, I’m using it to upload photos to the Dropbox folder I’ve already set up with my Hazel workflow.

Where CameraSync beats the official Dropbox app is in how it manages background uploads and geofencing: while the Dropbox app can finish uploads when it detects major changes in your device’s location, CameraSync comes with a dedicated screen to manage locations (such as Home and Work) and tell the app to start uploads when you arrive at a previously saved location. Additionally, the app can show a banner notification when entering a location, confirming that background uploads have started automatically.

The new 1.5 version doesn’t bring new features (which I’m told the developers are working on for 2.0) but it brings an iOS 7 redesign, a new icon, and, more importantly, it fixes bugs that had been affecting users on the new OS (the reason why I temporarily went back to the official Dropbox app). The new design is nothing revolutionary, the icon is nice, but what matters to me is that the app works properly under iOS 7 again. 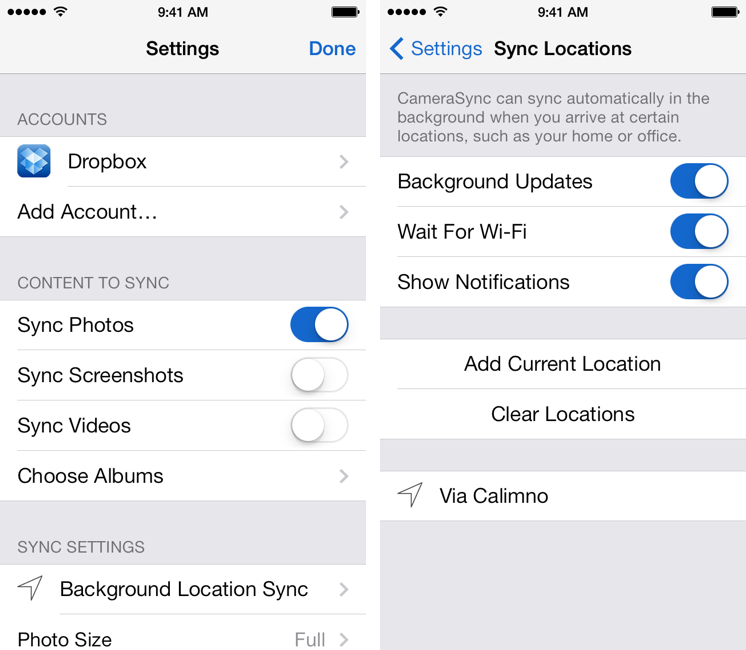 CameraSync hasn’t lost the superior upload features that make it a better choice to the Dropbox app if you want more granular controls over your media uploads. You can pick any folder in your Dropbox account as destination folder, and you can choose the content you want to sync: CameraSync comes with on/off toggles for photos, screenshots, and videos, so if you only want to upload photos to your Dropbox, you can do that. If you want to upload photos from specific albums on your device (this includes shared Photo Streams), you can do that too. And in the Settings, you can also set a photo size for uploads and choose to sync only on WiFi when a saved location is detected.

There are no new features in CameraSync 1.5 (for instance, you still can’t upload photos and videos to two separate services), but I’m glad that the app is back for iOS 7. I’m looking forward to trying version 2.0 and seeing if it’ll improve my photo backup workflow. In the meantime, the app is $2.99 on the App Store and Universal.