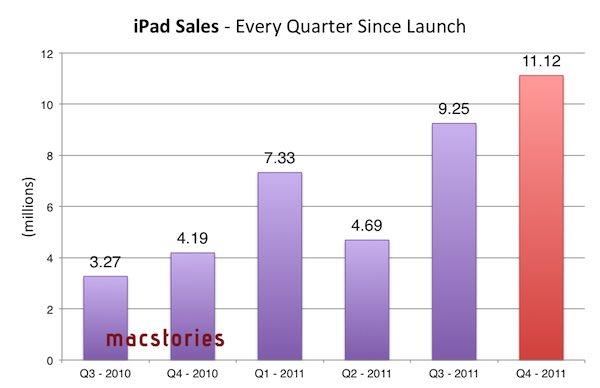 Apple held its quarterly earnings call late yesterday and while the results from the September quarter were slightly below what analysts expected, it was still a great result and within Apple’s projections. We covered the main numbers in our post yesterday and included some graphic visualisations of those numbers (such as the one above), but if you missed that here’s a quick summary:

But beyond these numbers there were a lot of interesting insights that CEO Tim Cook and CFO Peter Oppenheimer offered during the Q&A session. We’ve re-listened to the earnings call and included the most interesting snippets of that call in this article - answering questions from various analysts, the two answer questions on everything from iPhone rumors, iPad potential, Siri, China and what next quarter has in store for Apple. Be sure to jump the break to read it all.

After peaking in Q1 2009, the humble iPod line has continued to see a slowdown in growth, with the line slightly down from last quarter to 6.62 million sales — but it was actually above Apple’s expectations. Oppenheimer made light of the declining iPod, pointing out that iPod market share is still above 70% for the US and that the iPod touch is doing well and now constitutes over 50% of all iPods sold.

Apple’s content ecosystems composed of the iTunes Store, App Store and iBookstore have continued to excel with record results for iTunes seeing a total of 16 billion songs and 650 million TV shows sold since it launched. As highlighted at the iPhone 4S launch, the App Store has over 500,000 apps and has seen over 18 billion downloads — further boosted by the 33 additional countries that received the App Store in the September quarter. Finally, the iBookstore has seen more than 180 million downloads since it opened less than 2 years ago with the iPad launch.

One theme that Cook and Oppenheimer seemed intent on conveying was that as a consequence of the ‘fever-pitched’ rumours of a new iPhone, sales of the iPhone were negatively impacted in the second-half of the September quarter. Reference to this fact was made on at least three occasions throughout the call. They noted the impact was particularly evident towards the end of the September quarter - but it was apparently less significant than they were expecting.

Horace Dediu of Asymco tweeted the following image which illustrates the sales “hump” that Apple is referring to:

Supply of the 4S

Tim Cook said that they were incredibly happy with the number of 4S sales already and how consumers were reacting to it. He notes that Apple is confident that they will have enough supply to meet demand, although they are unsure when the two will balance. Nonetheless, Cook expects Apple to set an all-time record for iPhone sales next quarter.

Asked to elaborate on the new $0 price of the iPhone 3GS when on a postpaid plan, Tim Cook explained:

We did it because we want the iPhone more accessible to a broader market and so not only did we take the 3GS to free in a postpaid plan, but we also lowered the price of the iPhone 4….we did both of those because as we looked at it, these are still fantastic products and we think we can do reasonably well in selling these in the postpaid market. It also has the advantage of having a lower price in the prepaid market…we did it for both the prepaid and postpaid markets, they are both very important to us. It has been our thinking for a while to do that.

Lofty Goals for the iPhone

When questioned about his recent statement about the iPhone representing 5% of the mobile handset market, Tim Cook elaborated a bit, explaining:

We want the iPhone to be in as many customer hands as possible because it is the greatest phone by far and thats why we live to do that. So yes, we aspire to much higher volumes than we are and we think the smartphone market will eventually absorb the handset market…

Asked what he sees as Siri’s goal, Tim Cook responds by saying:

Well, you know the number of people already using [Siri] is amazing and the questions and personality it has is also incredible. So we see this as a profound innovation and I think over time you know many people will use it in a substantial way - what percentage of their input will be by it I don’t know, what percentage of their searches will it be, I don’t know. But our gut [feeling] about this since the beginning has been that it is a substantial and a significant innovation and thats the feedback we’re getting from our customers.

When Cook and Oppenheimer talked about the iPad they really took special care to mention the “huge opportunity for Apple” that the tablet market represents. Not only did this quarter see a new sales record for the iPad (with 11.1 million sales, a 166% increase year-over-year), but Apple is seeing “tremendous customer enthusiasm” - and Oppenheimer highlighted high adoption rates by the Fortune 500 companies.

We thought from the beginning it would be a huge market and it has been even greater than we thought. We’ve now sold 40 million [iPads] on a cumulative basis and it’s pretty clear to me that if you forecast out in time, that the tablet market will be larger than the PC market — thats not a guidance number, thats just something I very much believe. There will be many, many, more people that can access it and the ease of use is so phenomenal and off the charts that it is a huge opportunity for Apple.

Questioned about any potential impact that the Kindle Fire might have on the iPad, Tim Cook responded by saying:

We’ve seen several competitors come to market to try and compete with iPad over time, some had different form factors, different price points. I think it’s reasonable to say none of these had gained traction and as all of these competitors were coming to market, we actually raised our market share… When you really assess this thing and look at iOS 5, iCloud, the ecosystem with iTunes and the app store and books and movies and the fact that we have over 140,000 native iPad apps versus a number in the hundreds for the other guys, I feel very very confident about our ability to compete and am very confident in our product.

Cannibalisation of the Mac and PC

A big question analysts have been asking is what the actual impact the iPad is having on the Mac and PC market. The answer (at least for the Mac), is curious with some cannibalisation certainly happening, but it could actually be that the iPad is bringing new Apple customers to purchase Macs:

In the September quarter Apple opened 30 new retail stores, 21 of which were international (non-US) stores. This took the number of Apple Stores to 357, with the average revenue per-store at $10.7 million. Apple saw 77.5 million customers walk through its stores and saw the revenue generated from its stores rise slightly (1%) to $3.6 billion.

Although Tim Cook wouldn’t comment on any particular lawsuit or what its end-goal was, he said this on the patent disputes Apple is involved in:

We spend a lot of time and money and resources in coming up with incredible innovations and we don’t like it when someone else takes those and so that’s why we have unfortunately been pushed in to the court system to remedy that.

Apple’s cash reserves have now skyrocketed to over $81 billion, and as is frequent in these earnings calls, Cook and Oppenheimer were questioned over what they might spend this massive amount of money on. Cook repeated the line that they will use it for whatever is “in Apple’s best interests”, simply noting that they are conservative about spending that cash on won’t do “silly things” with it.

To date we’ve wanted to have flexibility…. The cash isn’t burning a hole in our pockets and we’re not going to do silly things with it. We invest it conservatively….We’ve taken money and done things in Apple’s best interests, for example we’ve acquired several companies, some IP, we’ve invested in the supply chain and we use money to build out our stores and for new product tooling. So I believe what we’re doing with cash …that said, I’m not religious about holding cash or not holding it, I’m religious about of a lot of things, but that’s not one of them. We do what we believe is in Apple’s best interests …and we’ll continue to discuss it on the Apple board.

Oppenheimer quickly noted at the end of Cook’s point that about two-thirds of that $81 billion is offshore.

China: The Sky is the Limit

Last quarter Tim Cook made special note of Apple’s opportunity in countries such as China, asked for a bit of an update in the Q&A section, Cook revealed some fascinating numbers. For a start, in FY09 China represented just 2% of Apple’s revenue, in the last quarter it represented 16% of Apple’s revenue. Growth in China for Apple continues “growing at a feverish pace” and Apple is continuing to make investments in China - including a number of additional retail stores.

…in my lifetime I’ve never seen so many people rise into the middle class that aspire to buy products that Apple makes…. it is an area of enormous opportunity.

In addition to China, Cook points to countries such as Brazil (where Apple’s revenue grew 118% year-over-year), Russia, the Middle East and India where Apple could see significant growth. He notes that there are several markets in which the iPhone has opened up the market for Apple - he expects the iPad to do the same as time goes on. In particular the Asia/Pacific operating segment saw 61% of growth in the September quarter.

Next Quarter and Beyond

As MG Siegler points out in this article on TechCrunch, Apple’s guidance for next quarter is huge. It is projecting to make $37 billion in revenue — for comparison sakes, it has never made more than $30 billion, its record is $28.57 billion which was made in the previous quarter, this September quarter was the second-best at $28.27 billion.

Where this really gets insane is when you realize that Apple always lowballs their projections. For example, this past quarter, they estimated they would bring in $25 billion in revenue, which they easily beat (it was the Street projections that they missed). So if Apple says they’re going to make $37 billion next quarter, it’s entirely possible — hell, maybe even likely — that they still will never have had a $30 billion quarter — because next quarter may be a $40 billion quarter.

As Siegler also notes in his article, Oppenheimer and Cook make repeated mention of expected record sales for both the iPhone and iPad. Plus, being a holiday quarter it seems entirely feasible that Apple could hit this high projection.