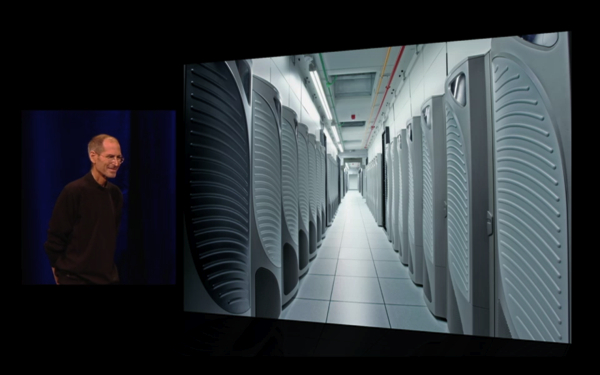 At around one hour, fifty-five minutes, and fifty seconds into Monday’s Keynote, Steve Jobs riposted, “If you don’t think we’re serious, you’re wrong.” The audience, wide-eyed with the announcement of iTunes Match, quickly hushed as Jobs paced across the stage. “This is our third data center that we just completed. It’s in Maiden, North Carolina.” Steve Jobs emphasized the enormous size of the data center, briefly revealing some of the technology inside. “We’re pretty proud of it.”

Apple’s 3rd data center had been at the center of speculation in the months leading up to Monday’s keynote, and while everyone agreed that the servers packed inside would host a myriad of iTunes content, no one really understood its true purpose. Many expected a much bigger announcement from Apple yesterday, with many eager to see music, video, and movie streaming at their fingertips. Instead, the iTunes services offered present a solution that met the demands for streaming half way: while files are still stored natively on devices, they’re available for access from iCloud itself. iTunes Match is agreeably head scratching, but the promise of a service that will just work by a Fall release gives me the feeling Apple hasn’t shown us everything there is to the un-locker service.

So with the focus on pushing content rather than streaming, the question that many are now asking is, “What exactly does Apple’s 3rd data center do if they’re not (yet) streaming content?” It’s a fair question, especially when Apple’s equipment is examined more closely. Many of the racks shown in Apple’s data center are capped with nothing but filler panels, and there’s an obvious mix of machines presented that were chosen more for show than to reveal Apple’s inner workings. With the brief glimpse Jobs gave us, however, it is possible to make a couple good guesses as we identify all of the equipment.In the first spotlight, Steve Jobs stands in front of a series of slick, futuristic cabinets that don’t resemble the typical server racks that we expect to see in a data center. The developers at the conference let out an audible “ooh” at this very moment, but what exactly was being presented?

Robin Harris from ZDNet notes that those fine curves are made possible by Teredata data warehouse systems in the form of Extreme Data Appliance racks that are perfect not for storing data, but for crunching numbers. These machines are used to process analytical data such as “business intelligence queries”, and “geospatial analysis”. The point is made that if Apple wanted to, they could easily aggregate information about where and what you buy. Harris goes so far to suggest that Apple could possibly be preparing to sell this consumer data - how, what, and where you use your phone - to advertisers. I see two things here which I’ll note briefly: iAds and “crowd-sourced” traffic services. 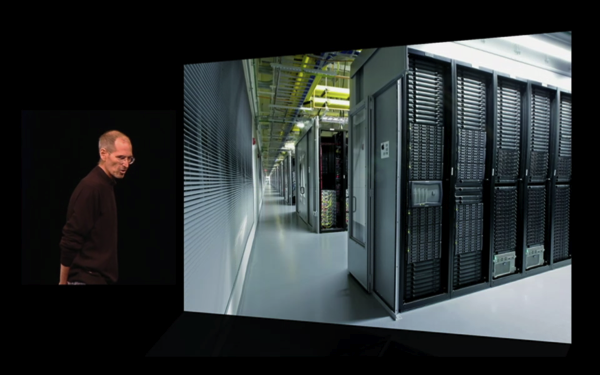 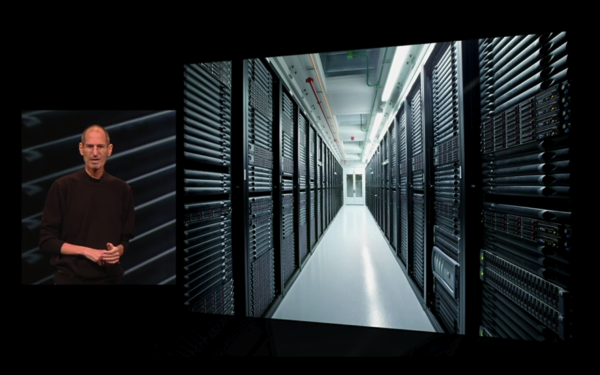 The second and third slides reveal more of what we’re used to: a ceiling of pipes overcasting a floor with rows and rows of servers. Stephen Foskett came to the conclusion many of the racks seen were HP ProLiant DL360 G7 servers with various NetApp applications speckled throughout. The filler panels seen are 1U Chatsworth “HotLoks”, to which Foskett observes, “They’re not very efficiently racked, but perhaps this was due to flexibility or power requirements…” Still, Larry Dignan from ZDNet confirms:

Those boxes don’t match IBM, Cisco, Oracle or Dell servers. There is an off-chance that the picture reveals Supermicros, but that’s a stretch.

Unless Apple used a stock photo inside their presentation to represent their data center, HP is a key player.

Apple’s data center is doing a lot more than serving content via iCloud. Notably, it’s doing a number of functions that aren’t dedicated to just storing your documents or sharing photos via Photo Stream. Apple is using these services internally, and our desire for instant gratification will have to wait as Apple implements their data into a new iOS function. Perhaps they just needed a bigger data warehouse for the sales department. Rumor has it that Apple could build a second data center in parallel to the one that’s already in Maiden - what you’ve seen this weekend with iCloud isn’t their final offering, but just the very start of something big.