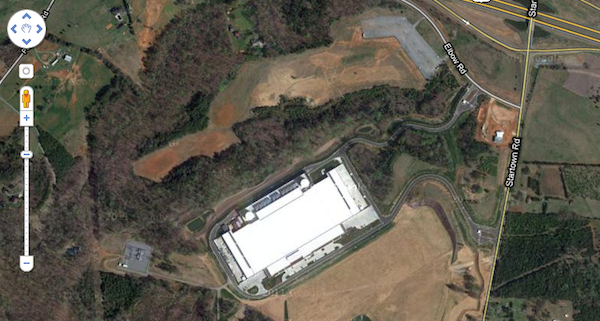 As noted by Philip Elmer-DeWitt at Fortune, Apple’s new data center in Maiden, North Carolina, is now visible in its entirety from Google Maps’s aerial view. The tidbit of information isn’t particularly interesting as far as the building goes – it’s the same white, anonymous construction we’ve been seeing in other shots from the past months – but the timing is interesting: according to Fortune, Apple started allowing Google to display the data center in their Maps service soon after the official WWDC announcement yesterday. In that announcement, Apple confirmed the WWDC keynote would see Steve Jobs and other executives on stage to unveil iOS 5, OS X Lion and iCloud. The data center was rumored to host a bevy of Internet services and online iTunes content, but the press release and the timing of this sudden Maps appearance seems to confirm that, yes, Maiden’s massive facility will be used for iCloud and all the cloud-related features of iOS 5 and OS X Lion.

But if you asked Google Earth or Google Maps to show you the intersection of U.S. Route 321 and Startown Road – where the data center is located – the current satellite imagery stopped a few yards short of the construction site. West of Startown Road, there was, as recently as two weeks ago, nothing but woods and farmland and a bit of driveway that ended abruptly in the middle of a field.

After Apple’s announcement Tuesday that Steve Jobs was ready to reveal iCloud – the “upcoming cloud services offering” presumably based in Maiden, N.C. – we thought we’d give Google Maps another try.

The data center in Maiden, North Carolina, is rumored to go under an expansion at 1 million square feet (from the current 500,000) and other reports claimed Apple was using highly custom equipment and a unique design to power its new Internet services and applications. As speculation is running wild on how Apple will use the data center with iCloud and iTunes, the company has reportedly already commissioned a new, smaller data center in Santa Clara, California.