Apple has updated its iWork suite of productivity apps consisting of Pages, Numbers, and Keynote with versions for iOS and iPadOS 15 and macOS Monterey. 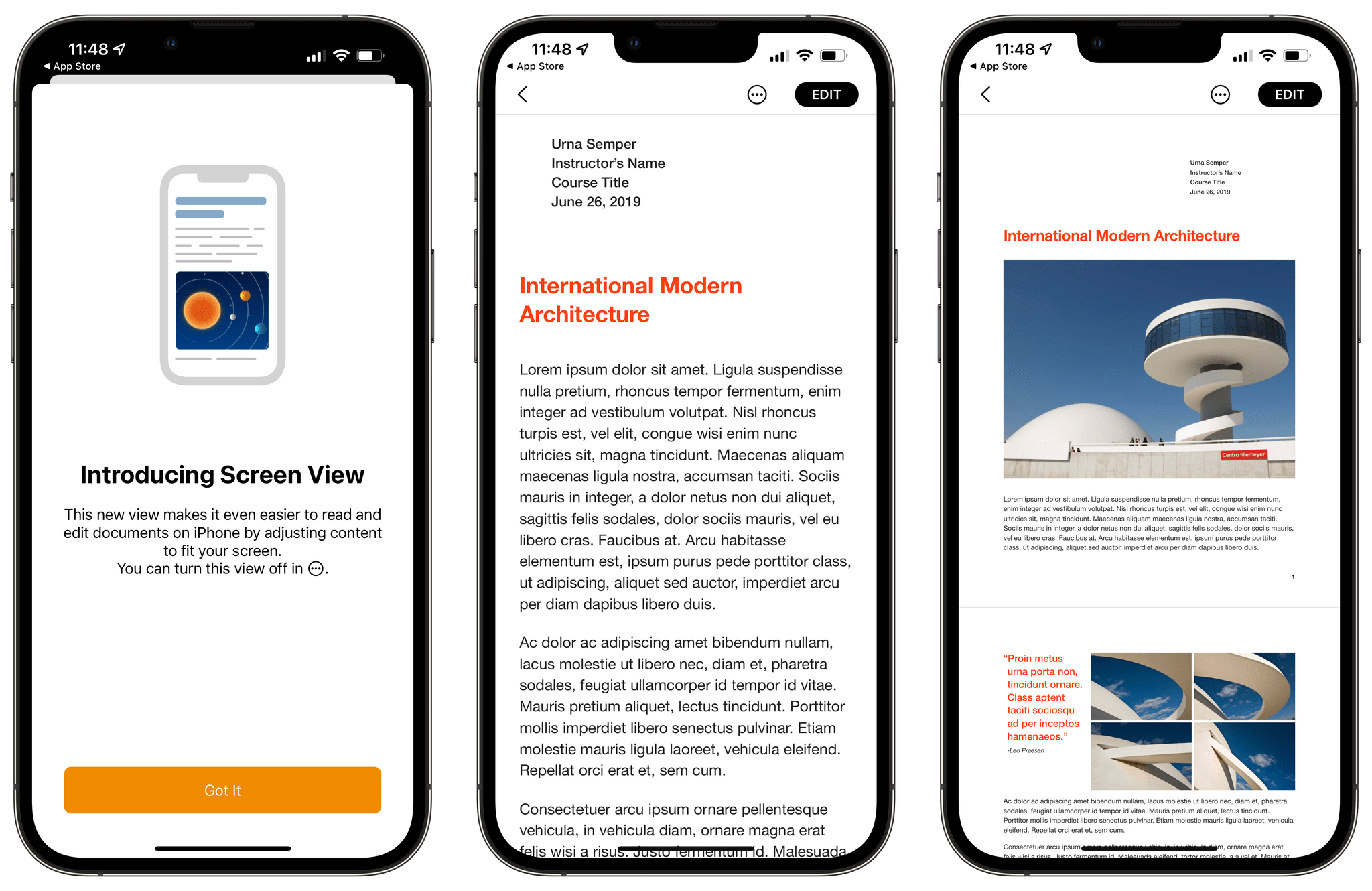 Quick View (center) focuses on the text of a document to make it easier to edit than the preview, which includes images (right).

On the iPhone, Pages supports a new Screen View that makes editing on the smaller screen easier. As you can see from the screenshot of one of Apple’s built-in templates, Screen View dispenses with the images allowing the user to focus on the text. The iPhone also has a Quick Format bar that lets you change things like paragraph styles, text formatting, alignment, and list styles. The iPhone version of Pages supports dragging and dropping images and text from other apps into Pages, too, which is a new feature in iOS 15. Graph values can be played as audio tones for visually impaired iOS and iPadOS users too.

On all platforms, Pages has gained improved publishing with two-page spreads, optimized images, and versioning, which should fill some of the gaps left by the fact that iBooks Author has been discontinued. Selected text can be translated into 11 languages, participants in a shared Pages document can add new collaborators for the first time, and radar charts comparing multiple variables have all been added to Pages on all platforms too.

Exclusive to the Mac, Pages documents can now be created from the app’s Dock icon. 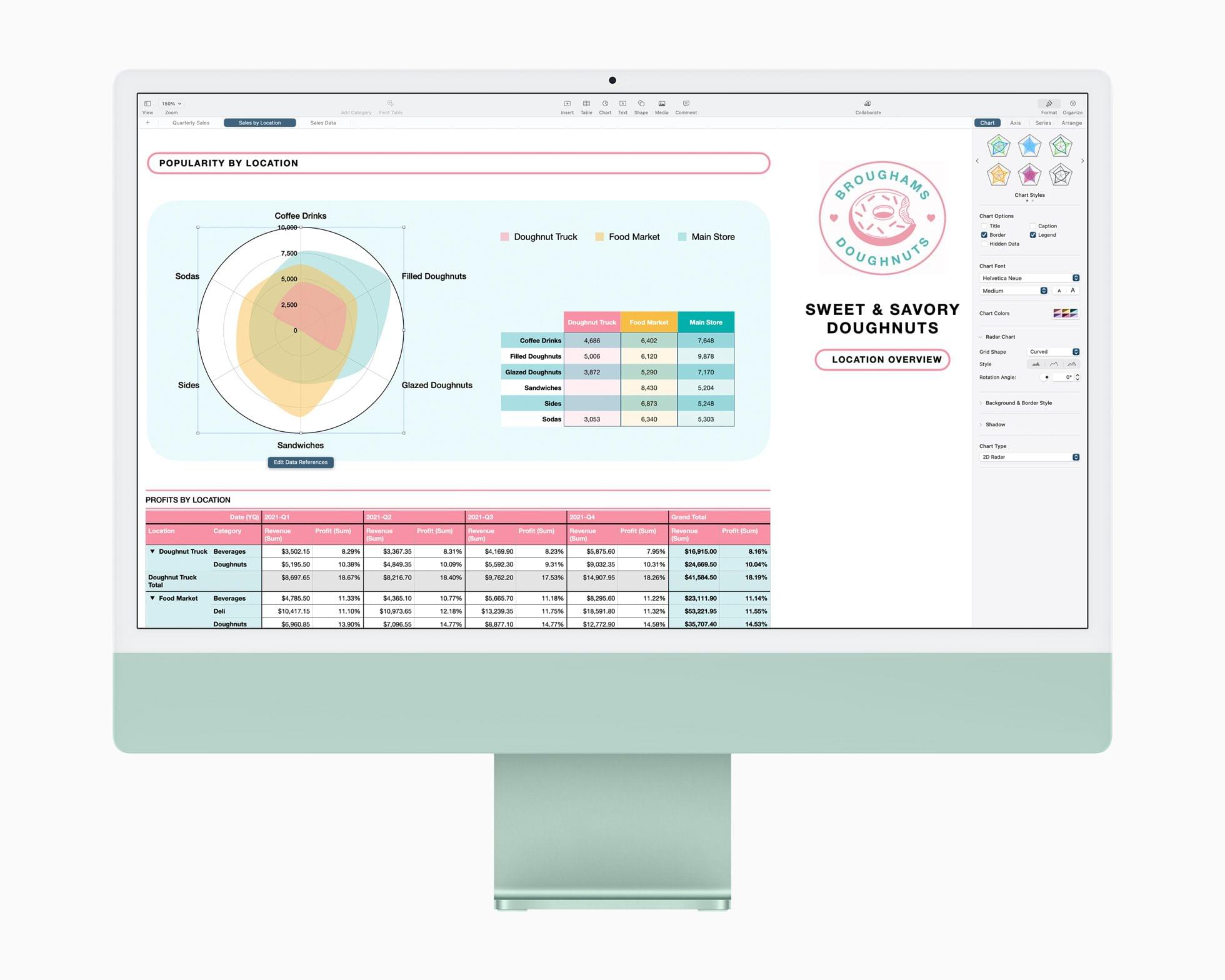 One of the things I’ve heard many Excel users complain about over the years is that Numbers didn’t include pivot tables. Now it does on all platforms, which is great if you need that sort of thing. Numbers’ format is compatible with Excel so you can import and export your pivot tables between the two apps too.

Like Pages, Numbers has added support for radar charts for visualizing multiple variables. Quick Filters have been redesigned to simplify showing and hiding rows that match certain values. There’s also a filter for finding duplicate entries and unique values in your data. Like Pages, participants in a shared Numbers spreadsheet can add new collaborators, and selected text can be translated into 11 languages.

On the iPhone, Numbers has added audio graphs for the visually impaired. Also, on the Mac, a new Numbers document can be created from the app’s Dock icon.

Keynote presentations can be combined with live video. Source: Apple

Keynote presentations can include live video across all of Apple’s platforms, using the camera in your Mac to display video of you alongside your slides. On the Mac, there’s also support for multiple cameras for different viewing angles and adding live feeds of iPhone and iPad screens. If you’re doing a presentation with someone else, the Keynote update lets each participant take turns controlling the presentation. There are also new slide controls for navigating slides, controlling video sources, and working with other presenters. Like the other iWork apps, Keynote also supports radar charts, translation of selected text into 11 languages, and the ability of participants of shared presentations to invite new collaborators.

On the iPhone, Keynote supports iOS 15’s ability to drag and drop text and images between apps as well as audio graphs for the visually impaired. On the Mac, you can create a new presentation from the app’s Dock icon too.

These are bigger updates to the iWork apps than we’ve seen in a while, and especially nice to see that most of the new features are available across all of Apple’s platforms. The live video and screen sharing features of Keynote are the sort of thing that I expect a lot of people will find useful, especially if presenting remotely. Pivot tables aren’t something I expect to use, but they add a new level of sophisticated data analysis that wasn’t possible with Numbers before. Also, with improved publishing tools and a better iPhone user experience, Pages is far more useful for creating eBooks.