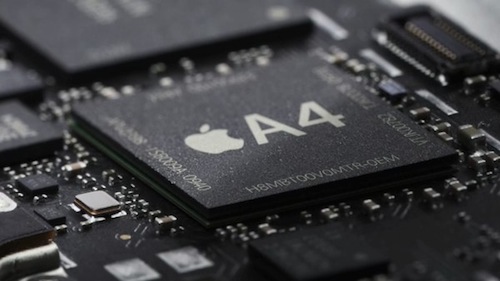 A second report from Digitimes this evening suggest that Apple might outsource the production of the A4 chip and the rumored Cortex-A9-based A5 to Taiwan Semiconductor Manufacturing Company, TSMC. Apple is reportedly concerned about leakage of production techniques and specs now that Samsung is directly competing with them in smartphone and tablet market, and TSMC already provided A4 production when Samsung was unable to meet demand last year.

Apple is reportedly looking to outsource the production of its A4 processor as well as the next-generation ARM Cortex-A9-based A5 processor to Taiwan Semiconductor Manufacturing Company (TSMC), according to industry sources. The Apple A4 processor is currently exclusively produced by Samsung Electronics, and the previous S5PC100 used in the iPhone 3GS was also developed and manufactured by the Korean company.

Digitimes also reports the iPad 2 will feature an “enhanced” version of the A4 chip, while the iPhone 5 will come with the brand new Apple A5 processor. A number of reports surfaced in the past indicated Apple was working on a CPU for the next iPhones and iPads, although it is unclear at this point which one will get the new A5. Several pundits also speculated Apple will adopt dual-core processors and implement RAM up to 1GB in the iPhone 5, which will likely come with a universal GSM / CDMA antenna as well.