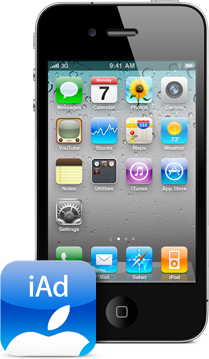 With a press release today Apple announced its exclusive partnership with Japanese brand agency Dentsu Group to bring iAds to Japan. The iAds following this partnership will be rolled out in Japan in early 2011 and Dentsu “will be responsible for the selling and creative execution”.

Check out the full press release below.

TOKYO and CUPERTINO, California—November 9, 2010—Apple® and The Dentsu Group today announced a partnership to expand Apple’s iAd℠ mobile advertising network to Japan in early 2011. Dentsu will be responsible for the selling and creative execution of iAds in Japan, and Apple will host, target and deliver the iAds to its iPhone® and iPod touch® users. iAd was launched in the US in July and has emerged as a powerful new way for leading brands to reach the tens of millions of iPhone and iPod touch users, while providing a significant new revenue stream for developers.

“After an incredibly successful launch in the US where we’ve already doubled the number of brands on the network, we’re excited to bring iAd to Japan,” said Andy Miller, Apple’s vice president of iAd. “Dentsu is one of the world’s most prestigious advertising agencies, making them an ideal partner for iAds in Japan.”

iAd, which is built into iOS 4, lets users stay within their current app while engaging with an ad, even while watching a video, playing a game or using in-ad purchase to download an app or buy iTunes® content.

Founded in 1901, Dentsu Inc. has held the position of world’s top brand agency for almost 40 years. Based in Tokyo, Dentsu offers national, multinational and global clients the most comprehensive range of advertising and marketing services through its unique “Integrated Communication Design” approach. Active worldwide in sports marketing and the production of movies, anime and other entertainment content, the Dentsu Group has more than 6,000 clients and close to 20,000 employees worldwide.