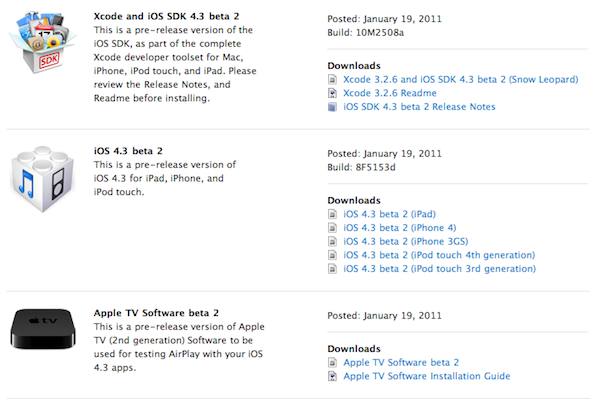 A few minutes ago Apple seeded the second beta of iOS 4.3 to developers. It’s available now in the iOS Dev Center. Build number is 8F5153d. The new beta is a 607 MB download for iPad and 679 MB for iPhone. We will update this story as we find out more about the new beta. iOS 4.3 beta 1 was released last week with build number 8F5148b.

Check for updates after the break.

In the release notes of the beta, Apple confirms that the multitasking gestures for iPad won’t be enabled in the final release, but developers are encouraged to test them. It is unclear whether or not come the public release of iOS 4.3 developers will still be able to activate the feature through Xcode.

This beta release contains a preview of new multitasking gestures for iPad. You can use four or five fingers to pinch to the Home Screen, swipe up to reveal the multitasking bar, and swipe left or right between apps. This feature will not be enabled in iOS 4.3 for customers, but we are providing this preview to gather input on how these gestures work with your apps.

Developers are encouraged to evaluate any existing interactions in their applications for potential sources of interference.

Update #1: There doesn’t seem to be anything new in beta 2 so far. The beta feels slightly snappier when opening and switching betweens apps, and gestures can still be activated with Xcode, as in beta 1.