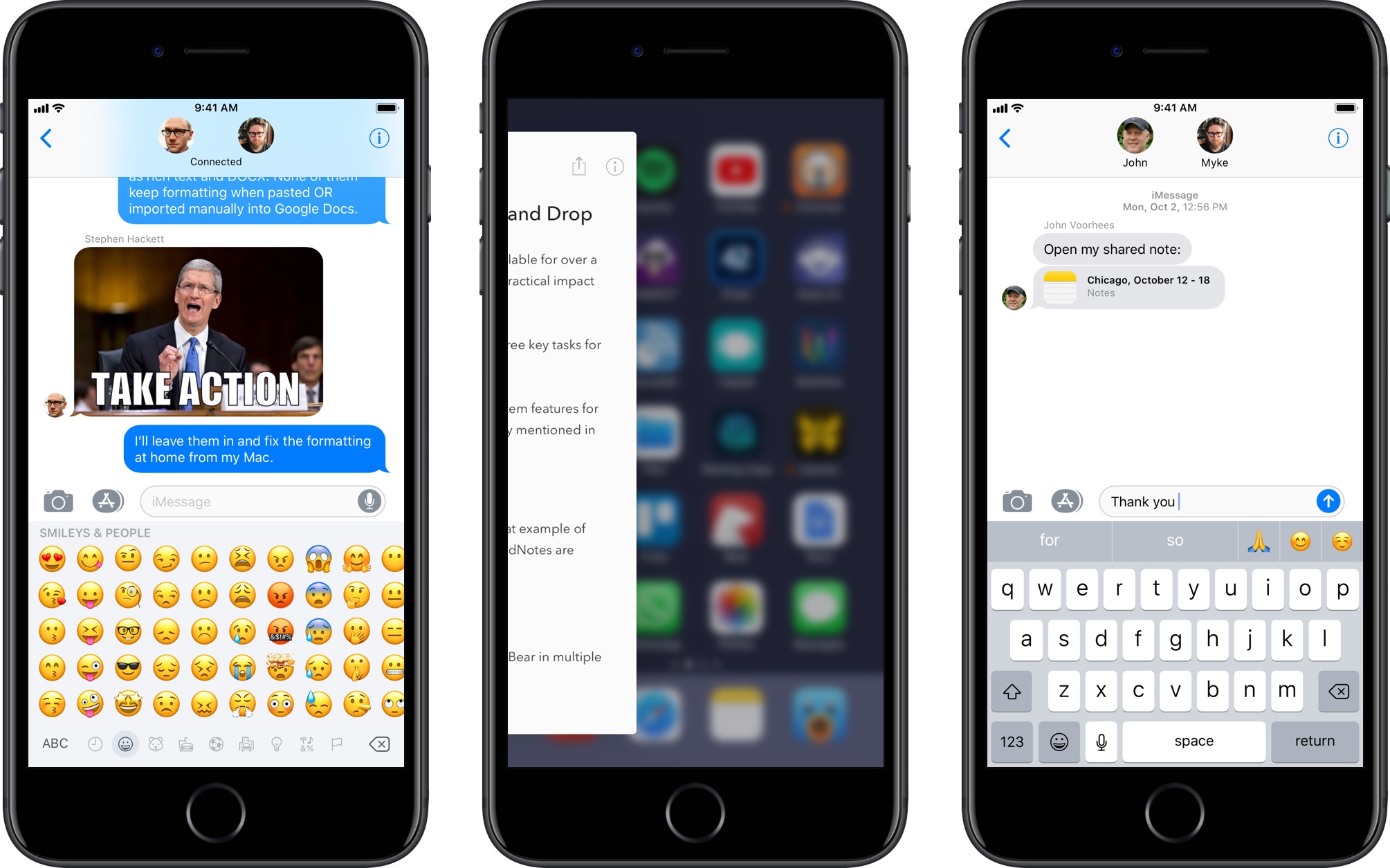 Ahead of the iPhone X’s launch on November 3rd, Apple today released iOS 11.1, the first major update since the OS’ debut in September. While iOS 11.1 doesn’t sport noteworthy enhancements to the iPad’s multitasking and drag and drop experience – arguably, the marquee functionalities of version 11.0 – it still contains welcome additions and fixes for every iPhone and iPad user.

As has become tradition with the company’s Fall updates to iOS, today’s iOS 11.1 includes 70 new unique emoji, for a total of ~240 characters when taking into account all possible gender and skin tone combinations. iOS 11.1’s emoji have been adapted from the Unicode 10 spec, which was proposed in late 2016 and approved earlier this year; these also include the characters Apple previewed on July 17 for World Emoji Day.

Among the highlights of this emoji release, you’ll find highly anticipated images such as the T-Rex, sandwich, hedgehog, orange heart, mages and fairies, as well as new smiley faces like Exploding Head, Face With Raised Eyebrow, Crazy Face, and Shushing Face. It’s also worth pointing out that, for the first time, iOS features a variety of inclusive gender-neutral emoji characters.

In addition to new emoji, Apple took the opportunity to redesign and refine some of the existing characters – either by tweaking the shading or depth of colors, or outright changing the image of a few emoji (see the squid, bee, and whale emoji).

It’s not surprising to see Apple continuing to push annual emoji releases as part of major updates to a new version of iOS. Emoji have become a reason to update iOS devices (or even buy new ones) for millions of users; releasing the new characters after a new version of iOS has already been available for a month gives Apple a chance to fix more issues, improve system performance, and restore missing functionality (more on this below) before another wave of customers upgrade for the ability to see and use the new emoji.

iOS 11.1 brings back one of the most glaring omissions of iOS 11: the ability to open the iPhone app switcher via 3D Touch has been restored, and it’s been evidently inspired by Apple’s work on multitasking gestures on the iPhone X.

Using 3D Touch to invoke the app switcher in iOS 11.1 is now a two-step gesture. Upon pressing firmly on the left edge of the display, the foreground app will slightly recede into the background and to the right, while a portion of the last used app will appear on the left side. At this point, you can either keep pressing to reveal the full app switcher (you’ll feel a second tap) or swipe quickly to the right to switch to the last used app.

With the new approach, Apple has been able to combine a shortcut to cycle between two apps and the old way of opening the app switcher without clicking the Home button. The result is a more flexible implementation of 3D Touch as a complement to multitasking; I find this iteration superior to the original switcher that launched with iOS 9 and the iPhone 6s. Interestingly, the app switcher can also be opened from the Home screen now, resulting in an even faster way to resume your activity in a recently used app.1

Here’s a list of other changes in iOS 11.1 worth mentioning.

New scroll-to-top animation. iOS’ characteristic animation to scroll to the top of a view by tapping the status bar has been updated in iOS 11.1. Now before reaching the top of a page or list, iOS smoothly decelerates and stops. It’s a subtle change, but it makes for a more pleasing visual effect that instantly makes the old animation feel crude and half-baked.

In my experience, this has been particularly convenient for emoji with gender variations, as well as multiple flavors for the same word, such as two types of dogs or multiple celebrations for the word “party”.

Reachability tweaks. In iOS 11.1, you can swipe down while in Reachability mode where the status bar would be to enter Cover Sheet and view your notifications. The option wasn’t working in previous releases of iOS 11 and it’s been fixed in 11.1.

Like last year’s iOS 10.1, iOS 11.1 stands out among other software updates Apple released today thanks to emoji and other miscellaneous enhancements. With new emoji already available in October (as opposed to December with iOS 10.2), it’ll be interesting to see what Apple will bring to the iOS 11 release cycle next.