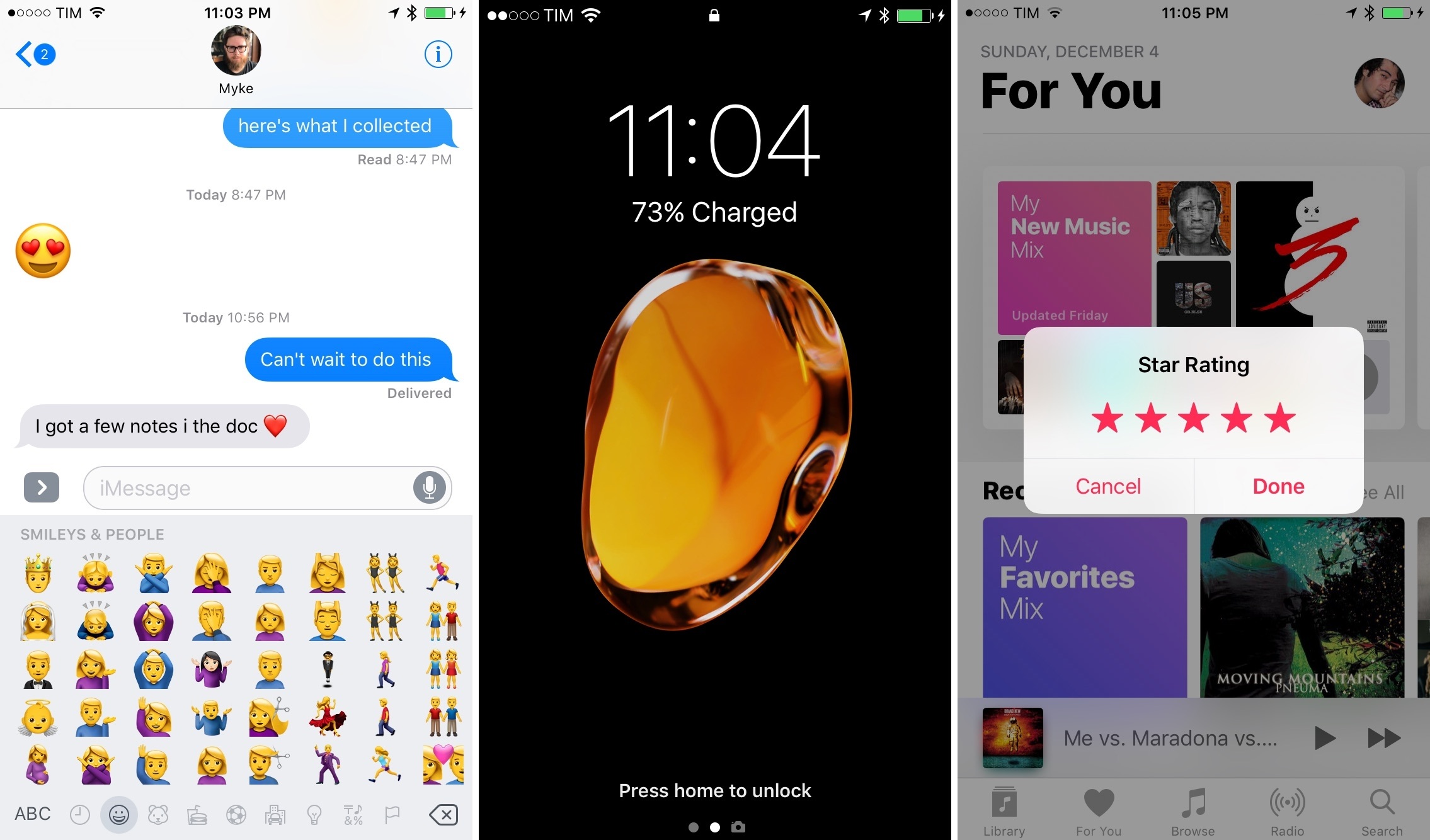 Apple released iOS 10.2 to the public today, bringing new and redesigned emoji, a variety of improvements to system apps and settings, and, for US-based users, the debut of the previously announced TV app.

iOS 10.2 is a notable release for emoji: Apple is now fully supporting the Unicode 9 emoji specification that includes 72 new emoji first approved by the Unicode Consortium earlier this year.

Among the new emoji characters, notable additions include the Rolling On The Floor Laughing face, Lying Face, Shrug and Face Palm, Selfie, and Black Heart.

In addition to new faces and expressions, new emoji in iOS 10.2 extend the range of animals and food contained in the set. Gorilla, Fox Face, Owl, and Duck are now part of the iOS emoji family, while Bacon, Pancakes, Carrot, and Avocado have been added in the food category.

Apple’s extensive emoji update doesn’t stop at characters and objects that will likely turn out to be extremely popular among iOS users. The company has also completely redesigned their emoji visual style with a modern, more realistic 3D appearance that increases the detail of every character. While previous Apple emoji designs were criticized in the design community for lacking cohesiveness, emoji in iOS 10.2 have a remarkable level of consistency across different categories and skin tones, showing that Apple invested time in redrawing emoji for the age of high-resolution displays and big emoji shared in messaging apps.

For more details on new emoji in iOS 10.2, check out Emojipedia’s in-depth look.

iOS 10.2 replaces the built-in Videos app with TV, a new centralized experience that, in addition to content from the iTunes Store, aggregates TV shows and movies from compatible apps in US App Store. 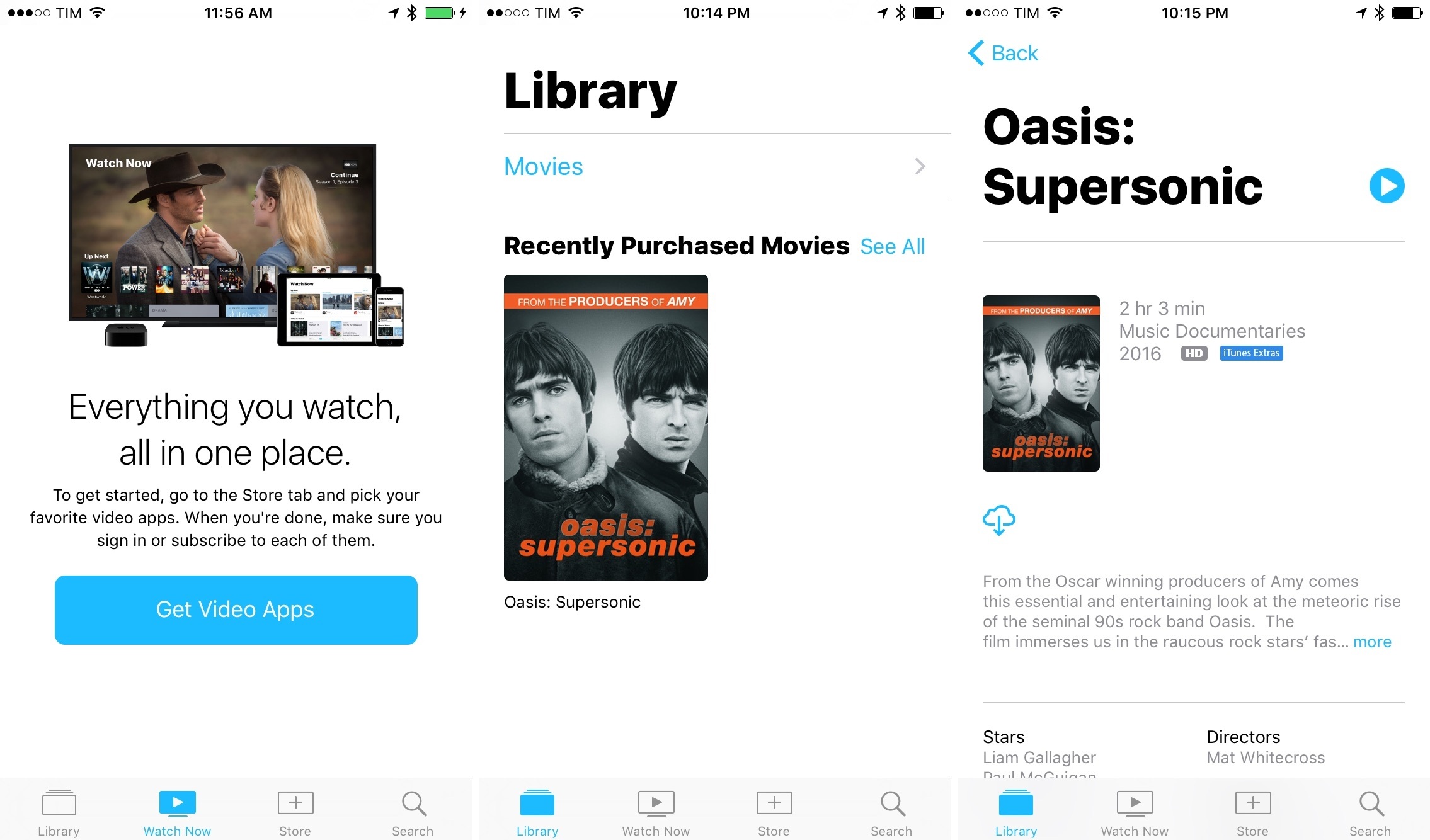 The TV app follows the “big and bold” aesthetic of Apple Music, Apple News, and Home in iOS 10 with the use of large headlines and thumbnails. There is deep integration with the App Store, which is used to install video apps, sign into them, and feed content to the TV app, which will then display individual items and launch the relevant app for playback.

The TV app is part of a bigger plan for Apple to unify and simplify the experience of watching television into a single app deeply integrated with iOS. There is a new widget, Siri integration, support for single sign-on, a tvOS counterpart, and more. We’ll have a dedicated review for iOS 10.2’s TV app on MacStories later this week.

iOS 10.2 brings a handful of new settings for better customization in system apps, including: 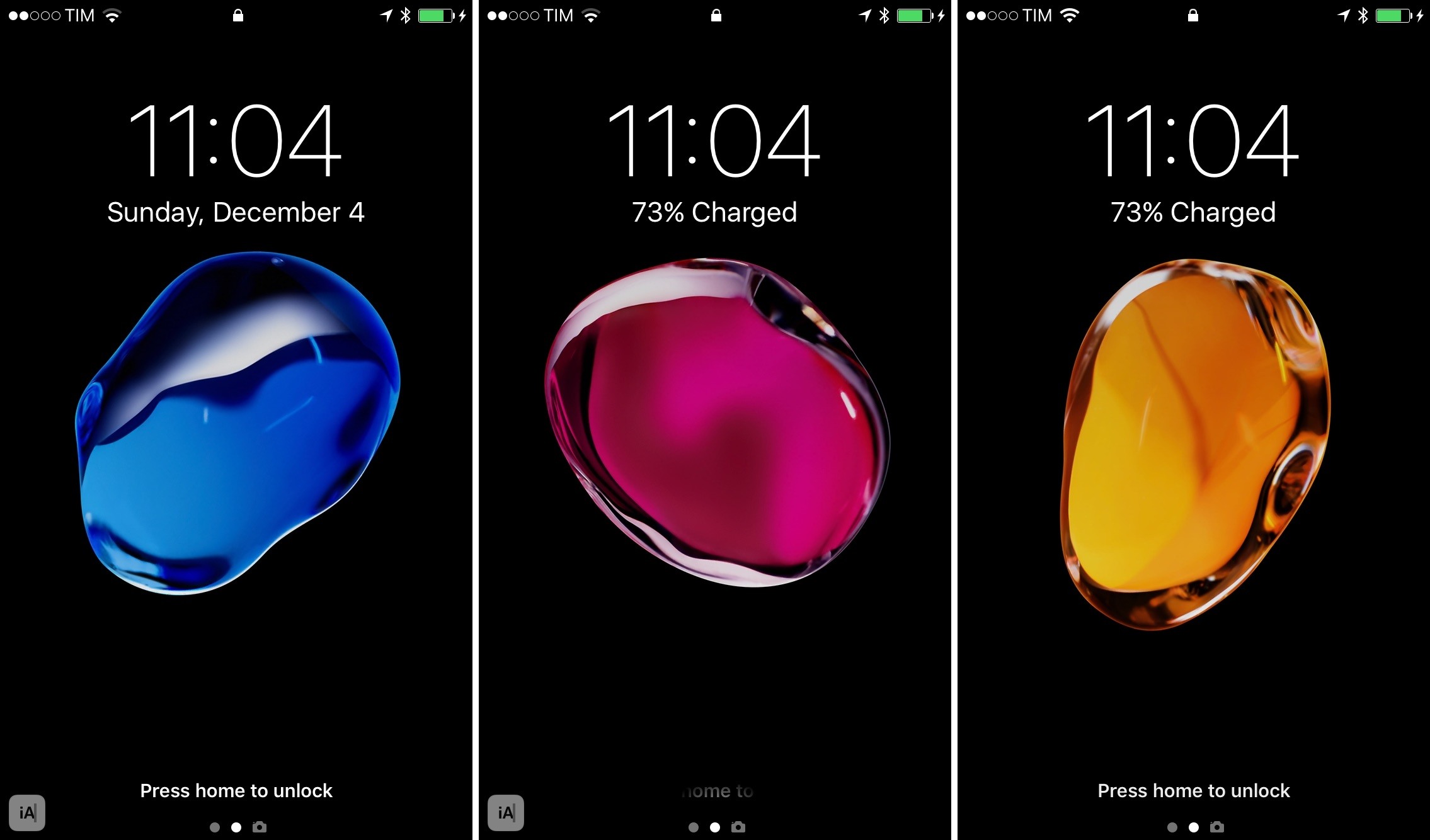 New wallpapers. iPhone 7 and iPhone 7 Plus owners can now choose from three additional static wallpapers based on Apple’s marketing images for the new devices. 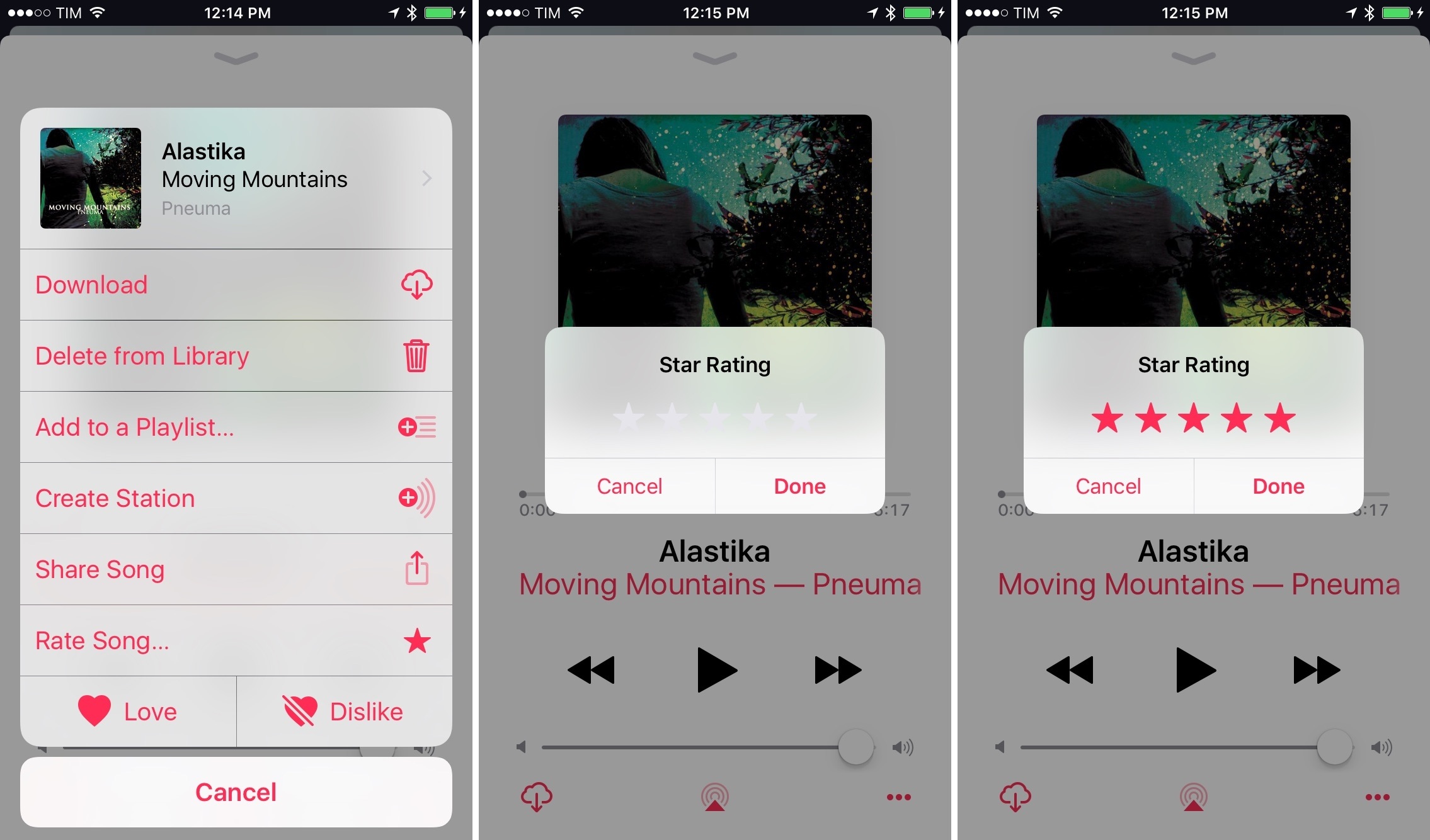 Star Ratings. Absent from the major redesign Apple Music went through in iOS 10.0, star ratings make a comeback in iOS 10.2 as a setting. Enabling star ratings from Music’ settings will add a ‘Rate Song’ button to a song’s action sheet, allowing you to assign 1-5 stars to a song. Top rated songs will be automatically added to the default ‘My Top Rated’ playlist in the Music app.

Press and Hold to Speak. With this new setting available under General > Accessibility > Home Button, you’ll be able to choose if Siri, Voice Control, or nothing should be activated when pressing and holding the Home button.

iOS 10.2 adds two new Screen effects for iMessage, bringing the total up to 7 (Bubble effects are still limited to 4). 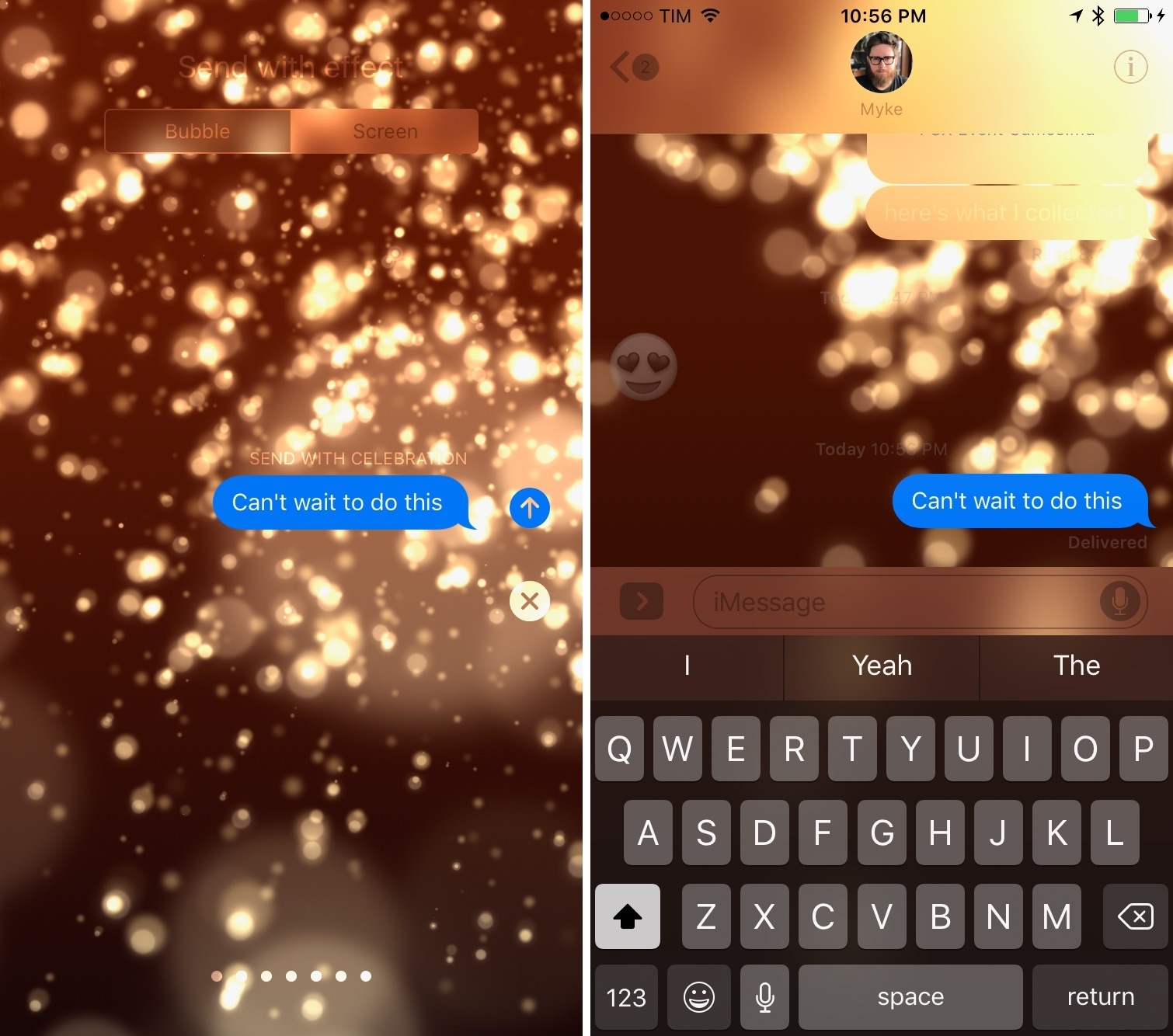 Celebration. This iMessage effect displays an explosion of lights similar to Fireworks. On the iPhone 7, the Taptic Engine is used to provide tactile feedback timed to the explosions – a neat detail worth noting. 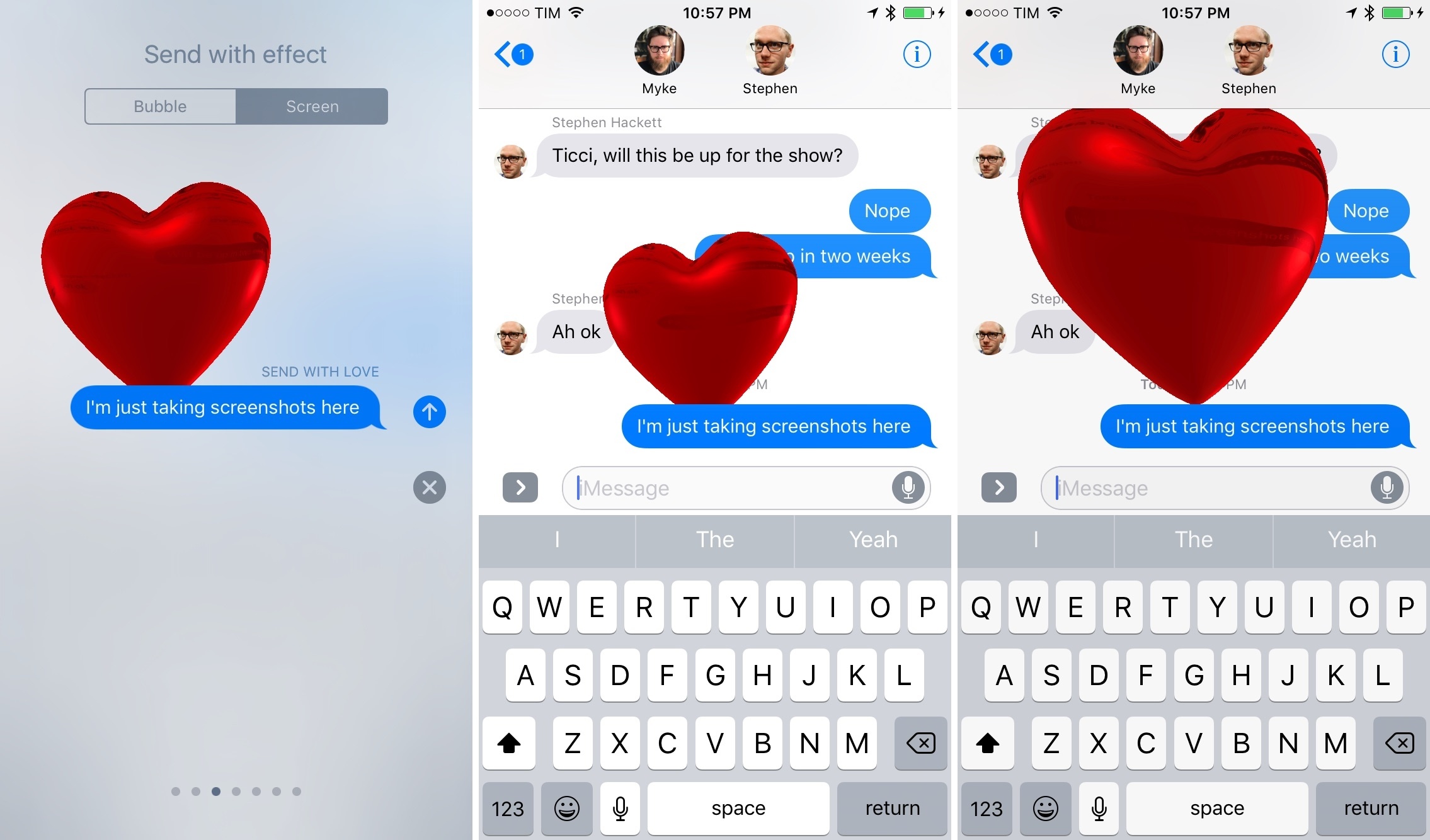 Love. The second iMessage effect is technically impressive for a couple of reasons. This effect blows a heart-shaped balloon that flies across a conversation until it disappears. First, there’s haptic feedback when blowing the balloon, and it feels surprisingly accurate and pertinent to the animation displayed on screen. Second, when the balloon is flying up, the actual iMessage conversation is reflected on its glossy 3D surface. It may be a simple effect, but a lot of work went into making it feel realistic.

SOS mode. A new emergency feature, modeled after a similar functionality for watchOS, is now available for Indian users by holding the power button for 5 seconds. 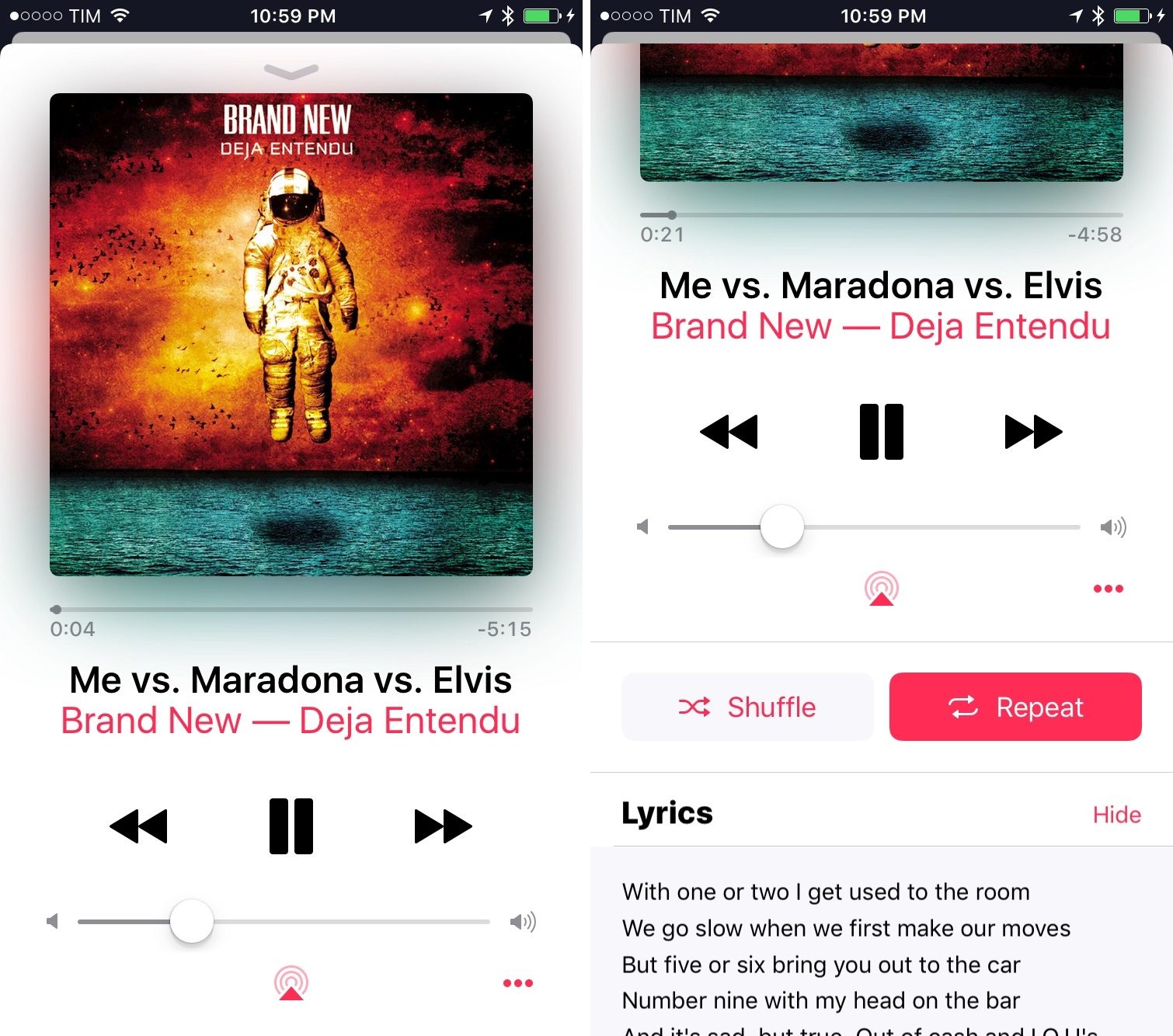 New Shuffle and Repeat buttons. One of the most criticized aspects of the Apple Music redesign in iOS 10 was the lack of discoverability for the shuffle and repeat features, hidden under the Now Playing screen. iOS 10.2 doesn’t change the Now Playing view to indicate that it can’t be scrolled, but Apple added a message hint upon first opening the screen, and the buttons have been redesigned to be larger and more tappable.

For more on iOS 10, you can read my original review from September 2016 here.