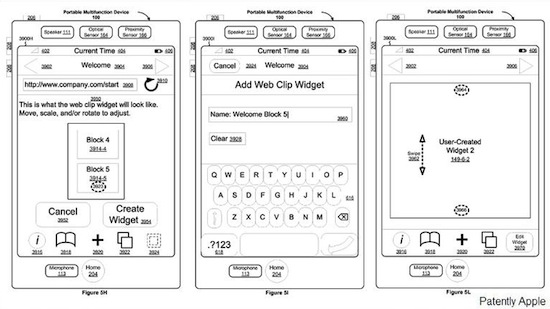 According to a series of new patent designs published by Patently Apple, Apple has been experimenting with interesting concepts to let users create web clip widgets on iOS, and have an extra connectivity port on the iPad while in landscape mode.

Web clip widgets were first introduced at the WWDC 2006, and through OS X Dashboard integration they allowed users to grab a portion of a webpage, save it as a widget in the Dashboard, and receive live updates when the original webpage changed. The feature came quite in handy for saving weather-related websites, e-commerce pages or blogs, but didn’t work really well with webpages that required a login system. However, it’s still a cool tech that enables users to visually select elements from a webpage to save locally on their Dashboards. Apple has been playing around with the idea of doing the same with iOS’ Safari, apparently, although neither the iPhone or iPad have support for homescreen widgets or Dashboard. The awarded patent design details the process of creating a web clip widget in Safari, with the possibility to “move, scale and/or rotate” content to adjust it to your needs. The menu appears to pop in as an overlay to the current webpage in Safari, but the patent doesn’t explain how a web clip would later be accessible from the Springboard. Current versions of iOS let users bookmark a website to the homescreen, but that’s still visualized as an icon – not a clip preview. Perhaps we’ll know more with iOS 5 at the upcoming WWDC.

The iPad-related patent is not new to the rumor mill, but it seems to confirm the original iPad was being tested in a version that featured an extra connector while in landscape mode.

Apple has been granted a design patent for what appears to be the original iPad Wi-Fi + 3G model that just happened to have a landscape USB slot as is clearly noted below in patent figures 1 and 6. It’s unknown at this time as to why Apple decided to scrap the secondary Landscape USB slot – when consumers clearly wanted such an option.

Apple credits Steve Jobs and Jonathan Ive (alongside other team members) for the invention. Both the original iPad and the iPad 2 come with a single connector below the device’s Home button, but it was rumored before Apple was planning on adding a second port for better landscape usage.