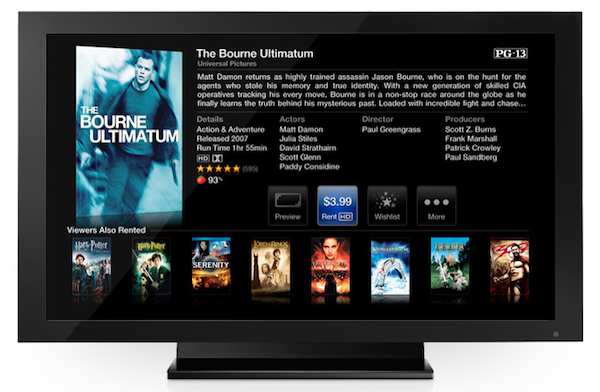 As reported by The Wall Street Journal in an article detailing some of the challenges Apple’s new CEO Tim Cook will have to face in the post-Jobs era and many of the achievements of the company’s former chief executive, Apple is allegedly working on a new technology to deliver video to televisions:

An immediate challenge for Mr. Cook will be to advance Apple’s plans in what is expected to be a key market for growth: digital video. Apple is working on new technology to deliver video to televisions, and has been discussing whether to try to launch a subscription TV service, according to people familiar with the matter. Unlike the iPod and music, where Apple has a commanding position, the battle to rule online video remains wide open and the company faces fierce competition.

No additional details are provided in the report, although speculation of new TV products from Apple has increasingly suggested in the past months that, just like with the iPod, iPhone and iPad before, the company is now aiming to disrupt another market that’s long been dominated by services, corporations and standards that don’t make it easy for consumers to have an optimal user experience. Specifically, rumors of an HDTV from Apple have been circulating for years, pinpointing what turned out to be incorrect release dates, tech specs, and prices. However, these rumors have a reason to exist, as they’ve been subtly backed by Steve Jobs’ public criticism towards the current TV business model and cable companies, described as clumsy, complicated, and ultimately bad for consumers. At the D8 conference last year, when asked about whether Apple could get into the television business, Jobs replied:

The television industry fundamentally has a subsidized business model that gives everybody a set-top box for free, or for $10 a month, and that pretty much squashes any opportunity for innovation, because nobody’s willing to buy a set-top box. Ask TiVo, ask ReplayTV, ask Roku, ask Vudu, ask Google in a few months. So all you can do is add a box onto the TV system. […] The only way that’s ever going to change is if you can really go back to square one and tear up the set-top box, and redesign it from scratch with a consistent UI, across all these different functions, and get it to the consumer in a way that they’re willing to pay for it. Right now there’s no way to do that. So that’s the problem with the TV market.

The Wall Street Journal’s report doesn’t mention any new hardware from Apple, focusing on subscription services and technologies to stream video to televisions. However, as Apple is known for driving innovation by integrating software with their own hardware, it’s likely that when the company will find it “viable” to get into the TV market, they’ll do so by releasing their own hardware tightly integrated with a “new technology” and “subscription TV service”. Apple currently sells the Apple TV 2nd-gen – described multiple times by Jobs and Cook as a “hobby” – that runs a modified version of iOS and comes with a native Netflix app for instant movie streaming; recently the company added the possibility to stream any previously purchased content from the iTunes Store to the Apple Tv through their new iCloud platform. It was reported back in April that Apple added 12 petabytes of storage to their server farms for serving iTunes Store video, and a separate report mentioned Apple could soon launch a service similar to Netflix to stream movies and TV shows for a monthly fee.