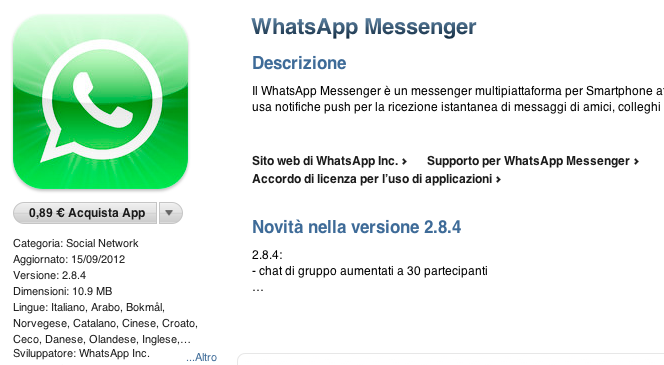 Section on VAT clarified, more updates at the bottom of the article.

As pointed out by several readers on Twitter, Apple appears to be changing pricing tiers of App Store applications in several European countries. Specifically, the lowest price used to be €0.79, which has today been bumped to €0.89. We’ve been able to confirm this is indeed the case, as shown in the screenshot above, taken from the Italian App Store.

With the introduction of new pricing tiers, some have suggested Apple has also slightly tweaked the commission it takes from every sale to 40%. It needs to be noted, however, that Apple’s commission in Europe was already 40% before . There are several factors to consider for this pricing change: Euro isn’t as strong as a year ago, so exchange rates have changed significantly in the past 12 months. Too, Apple is, as usual, paying VAT of 15% for Luxembourg, where the company is based for EU iTunes sales.

Camillo Miller helped us out with a comparison table of old proceeds Vs. new proceeds paid to developers (click for full-size): 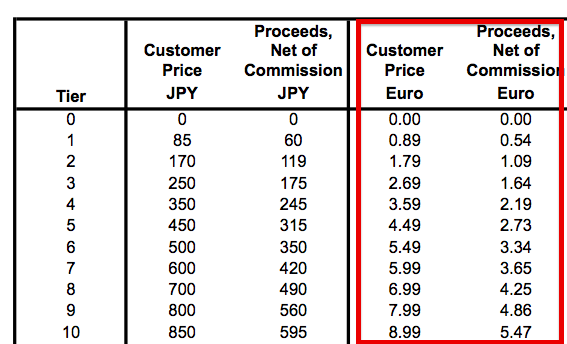 And old pricing matrix below.

It’s important to note that, today, iTunes Connect is undergoing maintenance. The pricing and commission change may be a temporary issue/error, but it seems unlikely considering the international rollout and updated PDF document available for download.

We’ll update this post with more information as it becomes available.

As noted by SaudiMac, Apple has also switched the Saudi and UAE App Store from US Dollars to local currency:

Apple has changed the currency for the Saudi Arabia App Store from United States Dollars to Saudi Riyals. A few examples: a $0.99 app now costs SR 3.69 and a $19.99 now costs SR 74.99. The change happened with the UAE App Store and Dirhams. Other Arab countries still has US$ for their app prices.

We’ve collected replies we have received on Twitter here and here.

Editor’s note: Thanks everyone who helped with information for the article.