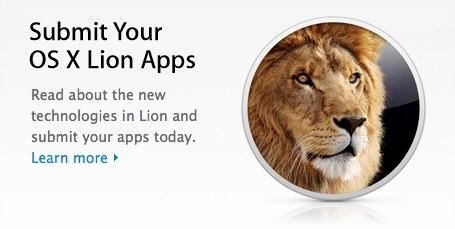 Earlier this week, Apple informed registered Mac developers that they could start submitting apps targeting the new features of OS X Lion – coming this month – such as full-screen mode, sandboxing, push notifications and new Aqua interface controls. In the email sent to developers, Apple wrote: “OS X Lion, the eighth major release of the world’s most advanced operating system, will soon be available to millions of Mac users around the world. Submit your Lion apps for review now so they can be on the Mac App Store when Lion ships this month.” Whilst several rumors in the past had claimed Lion would be released today, July 14th, alongside new Mac hardware, such claims have failed to come true as the OS isn’t available to the general public yet. According to most recent speculation, minor issues with app resumes and restarts in Lion have forced Apple to “delay” the release – though it’s not clear how the company could delay something that was set for July, but wasn’t given a precise release date.

The four apps above were existing Mac App Store apps that have been updated to receive Lion fixes and support. The fact that all these updates were approved today leaves us wondering whether Apple wants to quickly get the Store ready for a Lion launch next week by approving apps that take advantage of the new OS – Lion will be exclusively distributed on the Mac App Store and, after it launches, new users may want to spend some extra money to get apps that work nicely with it. Since Apple began accepting Lion submissions this week many wondered whether the new OS could really come out today – if history is of any indication, it usually takes a week for Apple to begin accepting app updates and actually releasing a new major OS. According to a series of fresh claims, Lion is on schedule for a launch next week.