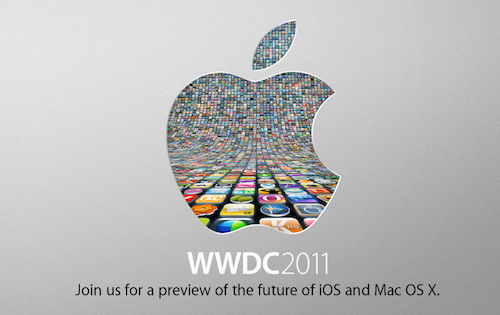 Apple just announced the official dates for the WWDC 2011. The developer event kicks off in San Francisco on June 6 and it runs through June 10. With more than 100 sessions and support by over 1,000 Apple engineers, the WWDC is the perfect place to connect with fellow iOS and OS X developers around the world. Apple is heavily betting on the WWDC 2011 to “unveil the future of iOS and OS X”:

At this year’s conference we are going to unveil the future of iOS and Mac OS,” said Philip Schiller, Apple’s senior vice president of Worldwide Product Marketing. “If you are an iOS or Mac OS X software developer, this is the event that you do not want to miss.

Furthermore, there will be Apple Design Awards for iPhone, iPad and Mac apps this year. Last year, Apple didn’t include Mac software in the Design Awards, which “recognize apps that demonstrate technical excellence, innovation and outstanding design”.

Tickets are available now starting at $1,599 here. Press release below.

CUPERTINO, California—March 28, 2011—Apple® today announced that it will hold its annual Worldwide Developers Conference (WWDC) June 6 through June 10 at San Francisco’s Moscone West. At this year’s five-day conference Apple will unveil the future of iOS and Mac OS®, including exciting demonstrations of the new kinds of apps that developers can build using Apple’s advanced frameworks and more than 100 technical sessions presented by Apple engineers.

“At this year’s conference we are going to unveil the future of iOS and Mac OS,” said Philip Schiller, Apple’s senior vice president of Worldwide Product Marketing. “If you are an iOS or Mac OS X software developer, this is the event that you do not want to miss.”

Mobile developers will be able to explore the latest innovations and capabilities of iOS and learn how to greatly enhance the functionality, performance and design of their apps. Mac® developers will see and learn how to develop world-class Mac OS X Lion applications using its latest technologies and capabilities. Developers can even bring their code to the labs and work with Apple engineers, applying development techniques and best-practices to enhance their apps.

Activities at Apple’s WWDC 2011 include:

Go to the Apple Worldwide Developers Conference 2011 website (developer.apple.com/wwdc)  to purchase tickets, as well as for updates and more information.