UPDATED: Included a discussion on various sales taxes to clarify some of sections of the analysis, also corrected a mistake regarding Denmark prices.

For those of you who aren’t located in the United States, Wednesday’s news of Apple re-adjusting their prices in the App Store for international stores might have been pretty big news. For many the headline was welcome news, indeed when I woke up Thursday morning and saw they had finally re-calibrated the iTunes ‘exchange-rate’ I was pretty happy about it. We first discussed the great disparity in global iTunes prices back in January and I was pleased to see Apple eventually act and restore some fairness for international consumers.

Unfortunately I soon figured out it wasn’t all good news; Apple had only adjusted the iTunes ‘exchange-rate’ for apps. For their other stores such as for music, movies, TV shows and books the prices remained unchanged. Nonetheless I have revisited my January analysis, updating that data and doing some further analysis of what the price changes actually bring, what it means for individual countries and who is better or worse off.

In all of Apple’s digital stores they operate with a price tiered system based on the US dollar. For the App Store the first tier is $0.99 and it goes up to $999.99, which is tier 85. From these tiers, priced in US dollars, Apple applies a conversion rate to each tier and converts its into all the various foreign currencies for use in the international App/iTunes Stores. This conversion rate is supposed to resemble a long-term average of a country’s exchange rate with the US and is thus different for every country with a different exchange rate – which is why Italy, Germany and others share the same iTunes prices because they all use the Euro.

Apple fixes this conversion rate and very rarely changes it, and this Wednesday was the first time they have ever altered it for the App Store. The reason they fix it to a tiered system is (I believe) to ensure consistency and simplicity. It allows developers to apply a US price and Apple automatically gives their app a directly correlated price in international stores because of the tier that is selected. If they used a constantly updating exchange-rate it would not only be confusing for customers but developers would have trouble marketing their app because they would never know what the price would be in a local country. That said, for some countries including China, Apple doesn’t use a conversion rate – instead they opt to sell Apps in USD.

Oversight in my Initial Analysis
Whilst I am explaining this tiered system, I should point out a flaw in my initial analysis of the price disparity across iTunes stores. I had presumed that the conversion rate for the tiers would all be the same. Whilst it was for a few countries, most countries actually have a conversion rate that alters across the tiers. Why? Well it turns out Apple prefers to have nice clean numbers rather than a constant conversion rate, in fact for most countries each tier will end in .99 and for others such as Mexico and Norway only whole numbers are used. That said, the difference between each tier is typically fairly minimal and does not alter the outcome of my original article.

The Changes Apple Made

You may recall that in my initial analysis I compared the price of Angry Birds across all the Apple App Stores, to be consistent I have updated that graph. The gray columns represent the old prices. Just glancing at the above graph it becomes clear that prices are now much more balanced across the international stores. Of course, part of that re-balancing has meant that consumers in the UK and Mexico have had to see an increase in their prices. But it means that those that had been most affected by the price disparity (namely Switzerland, Japan and Australia) now get a much better price.

How The Disparity Varies Across Price Tiers

As I noted above, Apple puts preference on nice clean numbers over using an identical conversion rate on all price tiers. As a result, as you go from tier to tier there is some variance in the conversion rate. In terms of dollars this obviously goes up (see the above diagram) as you go up the tiers. However this isn’t a very representative graph as it exaggerates the disparity - seemingly suggesting that as you go up the tiers, the price difference becomes larger (which isn’t really true). The below diagram is a fairer representation and illustrates the percentage difference between the US price and the price in international stores across the first 15 tiers.

That seems to show a fairly constant percentage disparity despite the various peaks and troughs. It is interesting to see that for Australia, the price disparity is fairly minimal for the first three tiers, but then suddenly jumps up 15% at the fourth tier and never goes back down. You may also notice that despite seeing an increase in prices in the UK and Mexican App Stores, there are two tiers in which they are better off. For the UK it is at the $5.99 price point and for Mexico it is at the $12.99 price point. You may also notice in the graph that the New Zealand line dives from the tier 9 to tier 15 – it does go back up but I had to cut the graph at tier 15.

When I average the percentage disparity for the first 15 tiers I got the above graph. Whilst these figures might change if you included more tiers, most consumers won’t be purchasing apps that are above the tier 15 price – so I think the figures are fairly valid.

A Note on Denmark

Turns out that this is incorrect, the pricing Matrix I had access to was incorrect, Apple has kept prices in Denmark identical to that as was reported on in January.

Initially I had decided to exclude the discussion of various sales taxes that Apple has to take into account because it even further complicates matters. However, I think not mentioning this has actually made it more confusing and some comments made below reflect this – so I have decided to explain this a bit more and have done some more number-crunching.

Nearly all countries have some form of sales tax, but not all include it in the price that iTunes shows you. But because some countries like Australia, Norway and Switzerland do include it, the price disparity shown above is exaggerated when compared to the US when the tax is added post-sale (the email receipts show how much that tax was). Because I had access to the price matrix that Apple shares with developers, I have now been able to calculate how much sales tax each country includes.

This is what I found: Australia (10%), Europe (13%), Switzerland (7%), Norway (20%) and Great Britain (13%). The rest of the countries may have sales taxes added on post-sale, but the price in the iTunes store does not include it. So now that I can remove the variable of taxes, how does the price disparity change? The below diagram shows the impact and perhaps most noticeable is that those in the UK are actually still better off than Americans. Also note that there is, for a few of the countries, still a price disparity - although with this weeks adjustment it is much more acceptable now.

Unfortunately whilst I could apply the tax rates calculated above from the App Stores and apply it to Music, Movies and other sections, I haven’t for two reasons. Firstly I cannot guarantee that it is the same rate, and secondly, other factors apply in pricing for those regions, in particular for music is the licensing agreements with music studios. So for those, just be aware that it is probably not feasible for a 0% price disparity across the board.

Uh Apple, Did You Forget Something?

Generally speaking the changes Apple made on Wednesday to App Store prices is good news as they did a fairly good job at equalizing prices across their international stores. Now the question is what did they do to the disparity for the other sections of the App Store such as Music? The answer: nothing (except for raising prices in Norway).

What makes ignoring these other parts of the iTunes ecosystem worse is that when the App Store launched in 2008 they re-configured the conversion rates – but Apple didn’t do the same for Music or any of the other components of iTunes. So even back in January, whilst I noted that App Store prices were bad, I showed that Music was even worse. It remains bad and it continues to get worse for countries such as Australia, which have seen some significant appreciation of their currency. So here are some graphs that illustrate the various price disparities across the Music, Movies, TV Shows and iBooks sections of the iTunes Store: 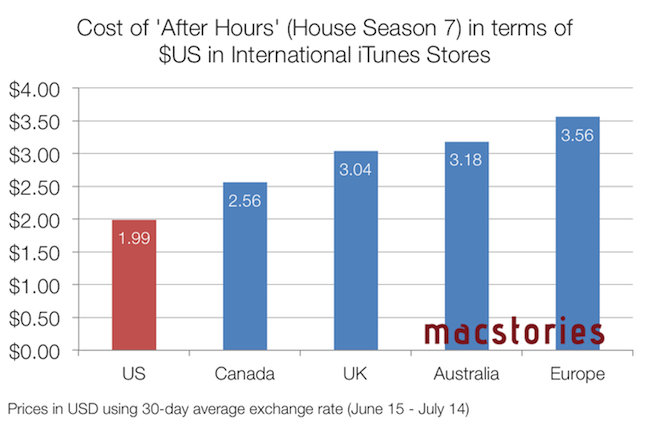 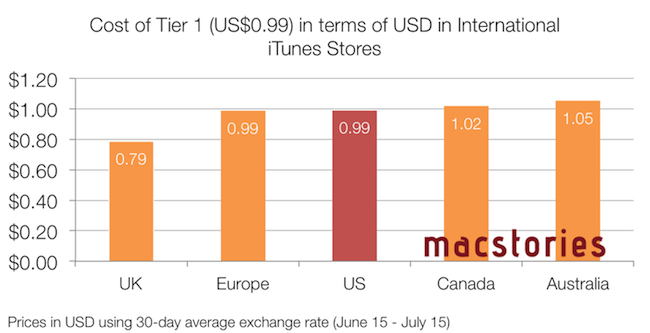 Norway Gets the Short End of the Stick

Update: As a Egil Helland points out below in the comments, it is indeed in response to a new tax regime being implemented in Norway.

Norway, which had enjoyed fairly decent prices (for Angry Birds they were only around $0.10 more) before the changes to the conversion rates on Wednesday. Yet for whatever reason, Apple decided to increase the prices of both Apps and Music in the Norway iTunes Store - despite already paying more than the US. Consequently for Apps, Norway is now the worst off. I have no idea why Apple decided to ramp up the prices in Norway but can only think that perhaps there was a change in tax regulations in Norway – if you know please let us know in the comments below.

This is a fairly complicated issue, whilst I have made strong efforts to ensure everything in this post is correct, I cannot guarantee it. If you notice something odd or incorrect, please comment below - I will make efforts to correct any such errors and I appreciate the comments.