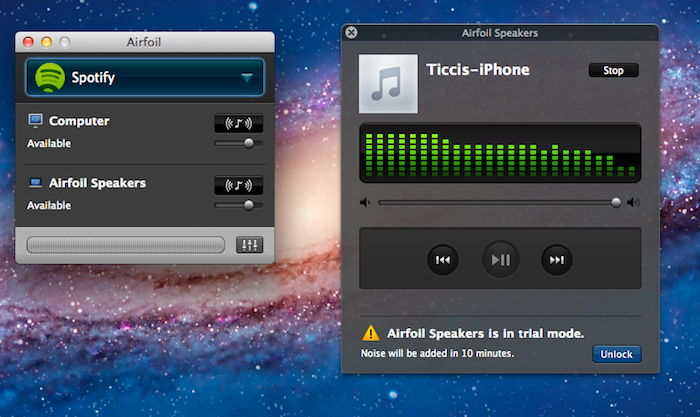 Back in December we reviewed Airfoil 4, an update to Rogue Amoeba’s powerful audio tool for OS X that streamlined the process of sending audio content from various applications to external speakers, computers or Apple TVs, also using the new AirPlay technology. Airfoil 4.5, a major update released today and free for existing customers, builds upon the excellent feature set of version 4 to deliver an even easier AirPlay integration that will allow iOS users to beam any kind of audio from any iOS app to the Airfoil Speakers app running on a Mac. This new functionality may sound very similar to other desktop AirPlay receivers like AirServer, and indeed it is, with the exception that Airfoil Speakers runs in its (beautiful) standalone window that, among other things, visualizes music controls and album artworks even during a wireless AirPlay session. 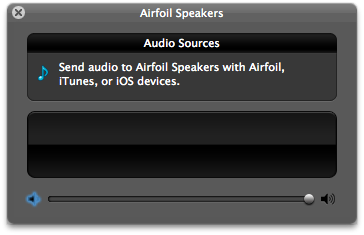 First and foremost, Airfoil Speakers for Mac can now receive audio from your iOS device! Launch Airfoil Speakers, and it will appear in the list of AirPlay devices on iOS. When you play audio in an app on your iPhone, iPod Touch, or iPad, you can select Airfoil Speakers from the AirPlay list, and you’ll hear the audio right on your Mac.

The new, powerful Airfoil Speakers are now compatible with iTunes on any Mac or PC and MacStories favorite Radium as well. Similarly to The Iconfactory’s latest update to Take Five for Mac, Airfoil 4.5 can now control apps like Spotify, Rdio and Radium so you’ll see control buttons alongside album artworks and track titles when grabbing audio from these sources. This change is welcome as you won’t be forced to switch to the original application to see what’s playing anymore.

Last, Rogue Amoeba says they’ve added support for AirPlay devices “from companies like iHome, JBL, and many more”, and that AirPlay-enabled hardware will work with Airfoil out of the box with no further configuration needed.

Airfoil 4.5 is a free update for licensed owners of Airfoil 4, and a license key can be purchased here at $25 to unlock the full app (free trial is available). With the much improved Airfoil Speakers utility, at this point we can’t help but recommend Airfoil if you’re looking for a simple, good-looking and powerful solution to manage audio in your house, room or office, and integrate it with Apple’s AirPlay.