As promised last weekend on Twitter, the Iconfactory has just posted the very first sneak peek of Twitterrific 4.0 for Mac, a major new version of the popular Twitter client.

There’s no release date or pricing info yet, but the app will require Snow Leopard due to some of its new features and, from the looks of it, it appears that Twitterrific for iOS highly inspired the development of this new version.

Back to the Mac, indeed. 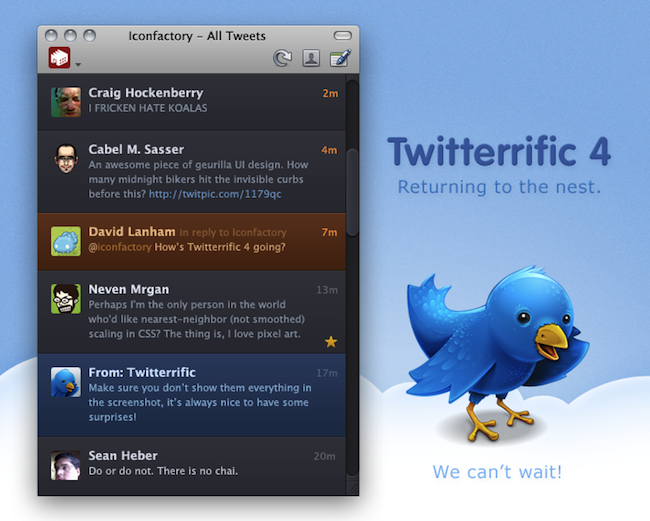 A dark look (I’d bet on the possibility to choose a light theme, though), integrated timeline, account switcher in the top toolbar, additional buttons to compose tweets and (I assume) check on your profile. It looks promising.

We’re pleased to report that the first phase, the release of Twitterrific 3 universal for iPhone and iPad, was completed in June.

After that we continued devoting development efforts to the 4.0 update to Twitterrific for Mac. As with any product that’s in development, we don’t currently have a firm release date or pricing. We can say that it will require Snow Leopard (10.6) because of some new features. We know that many of you are waiting anxiously, so we’re posting a tiny peek at the current state of Twitterrific on our desktops. Yes, the app is real and it’s going to be great!

We can’t wait either. We’ll keep you posted about the development of this new version of Twitterrific. Maybe it’s too early to say this, but I can see Twitterrific 4 coming back to where it belongs to give Tweetie a run for its money.