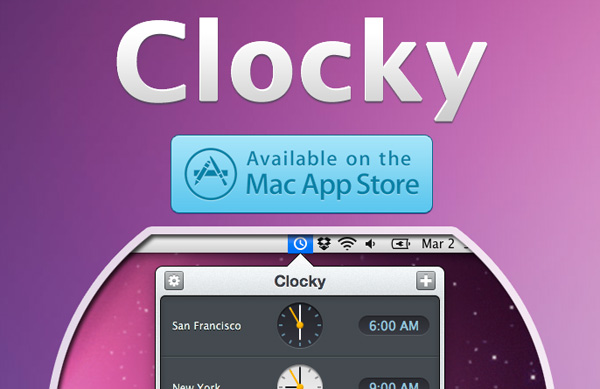 Clocky shows the current time in the cities you’ve added, there are 479 to choose from. To add a city, click the ‘+’ sign and use the drop down menu or start typing. Even with almost 500 cities, I found some cities, such as Federico’s town of Viterbo, not on the list. If you want to delete a city, simply select and delete, or drag the clock out of the app. You can also click and drag the clocks to rearrange them.

As I was finishing this review I was told the next release will allow people to rename the cities so that you can replace it with the name of a smaller city or by the name of the person living there, so this could be a work around for not finding exact cities but the addition of more cities would be great too. 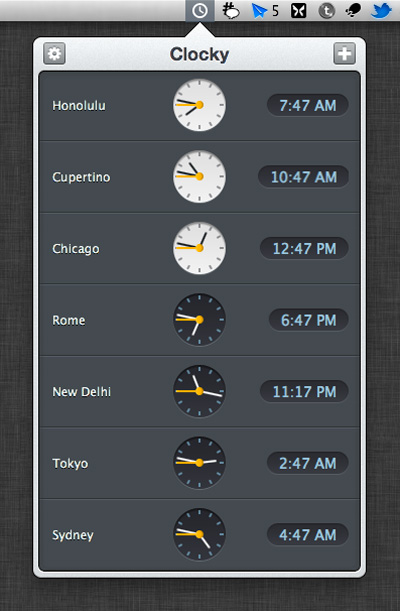 Clocky has a great icon and a clean & simple UI; it also has a great color scheme and is very OS X like. The animations are beautiful with a twitchy second and a white clock face for daylight hours and a black clock face for nighttime hours. The clocks are largest enough to read but not too small that you have to squint.

There are no real preferences (gear icon in app) for the app besides launching at login but a 24 hour clock option would be nice to have as well. The Mac app is only $1.99 and well worth the money if you want to keep track of times around the world or work with people all over the world like the MacStories team. I recommend the app and you can grab it here.

Note: If you want to change the clocks to 24 hour time you must go to System Preferences > Language & Text > Formats > Times and remove the AM/PM from the formats and click the drop down arrow on the hours setting and select the 24 hour format.

We have 5 copies of Clocky to give away.

To enter the giveaway, tweet the following message before 12:00pm EST on March 23rd: Win a copy of Clocky on @macstoriesnet via @StudioDalton http://mcstr.net/e9GTUt

Make sure to follow @macstoriesnet on Twitter so we can get in touch with you once the giveaway is over.

If you want to increase your odds of winning, you can also leave a comment to this post.

Winners will be contacted on March 24th.