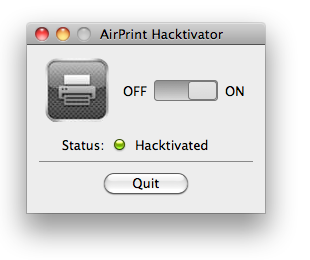 Remember AirPrint Hacktivator? It was a neat little hack thrown together by the folks over at Netputing which, by copying system files from the old developer betas of OS X 10.6.5, could enable AirPrint support for shared printers on the public version of 10.6.5. Admittedly, it wasn’t the most polished and “legal” hack, but it worked. And people liked it. And blogs covered it.

Too bad that when you publish software that re-distributes Apple’s source code, it comes a point where Apple legal makes a call. That’s exactly what happened to Netputing: they got an email from omm.com (one of Apple’s legal representatives) and were forced to remove the old versions of AirPrint Hacktivator, the one that copied old system files back into OS X 10.6.5.

Still, they came up with another solution:

As of version 1.7 I realised that the only thing needed to make AirPrint work was a single line. Version 1.7.1 now only inject this single line in an existing CUPS configuration file and does not rely in any way, shape or form on 10.6.5 beta files. Hopefully Apple will be fine with the removal of all previous versions from the site and will let me continue to distribute the Apple files free AirPrint Hacktivator 1.7.1 and subsequent versions.

The new version of Airprint Hacktivator is available here and, as usual, it should enable support for AirPrint’s shared printer on your OS X machine with just one click.