Tonight I went out to show some friends of mine Infinity Blade for the iPhone (they all loved the graphics, by the way) and when I came back home 10 minutes ago I decided I would take 10 minutes to check out The Smith’s albums that were released in the iTunes Store earlier today.

I had configured my Ping account to share items on Twitter, so I clicked the “Post” button and noticed something interesting: Apple has finally deployed a new short URL for Ping tweets, itun.es. The itun.es domain was purchased by Apple years ago, and since Apple announced the Ping - Twitter integration in November many thought itun.es would be a great option for those tweeted items. The itun.es links are now ready to go and they show up in the iTunes Store when sharing a song / album on Twitter.

It’s also interesting to notice that third party clients like Tweetie for Mac and Weet for iPhone don’t use itun.es but show Twitter’c t.co links instead. The itun.es links are visible to everyone in iTunes and Twitter.com. 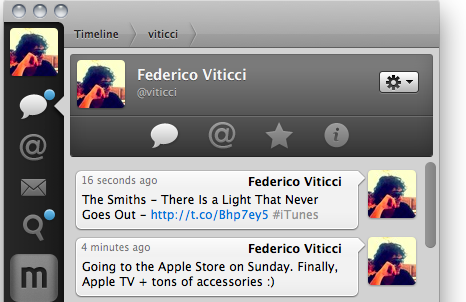 Last, a few days ago I saw the official @iTunesMusic account using tw.itunes.com link schemes. I thought that may be a new link system Apple was testing, but it looks like they went for itun.es instead.