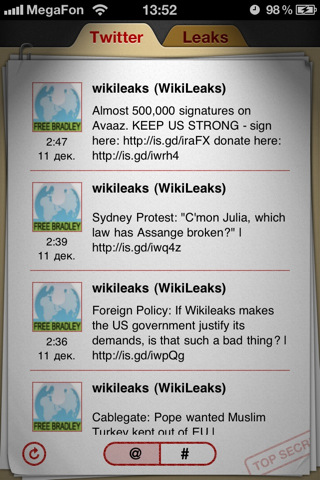 Three days ago we covered the unofficial WikiLeaks app for iPhone and iPad, a $1.99 piece of software available in the App Store which let you access the latest diplomatic cables released by WikiLeaks and check on the organization’s Twitter account. It was also nicely designed and sold as a universal app.

Developer Igor Barinov, though, wasn’t planning on taking all the money from the sales of the app. Instead, he decided to donate half of the proceeds to WikiLeaks, a move that likely pissed off Steve Jobs, or someone else at the App Store team. In fact, for some obscure reason or App Store guideline we’re no aware of, the app is gone. Killed. Kaput. There’s no WikiLeaks app in the App Store anymore. Without an explanation, the developer got an email from Apple about the changed state of his app, which was “removed from sale”.

I’m not sure this app violated any of Apple’s guidelines. It was a wrapper for a website (the CableGate documents) and a Twitter account – both of them publicly available on the internet. We all know there’s worse in the App Store, and – to tell the truth – this was also a good app. Assange and WikiLeaks are controversial and one may or may not agree with his efforts to “reveal the truth”, but there’s no reason to remove an unofficial app.

Unless, well, you’re Apple and you don’t care about your own Guidelines.