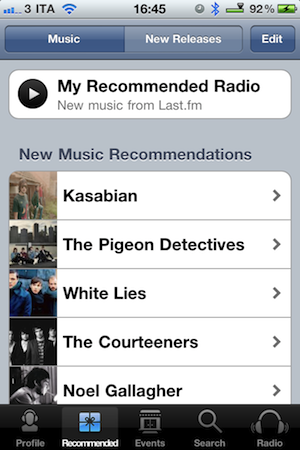 In spite of the lack of appreciation for Apple’s new subscription system from Last.fm’s co-founder Richard Jones, the popular music service released an update to their official iPhone client today – and it’s a rather big update. Version 3.0 of the app, available here, adds the much requested Retina Display graphics with an improved interface design (about time, considering the iPhone 4 was released 8 months ago), Last.fm music recommendations for artists and new albums you might like, possibility to (finally) check your profile on the go, including top charts, friends and recently played tracks.

Last.fm 3.0 for iPhone, however, comes with other features, too. First, a menu to check on concerts available in your area (sadly, no one wants to play here in Viterbo) and the events your friends are attending. This is pretty cool and adds another layer of social interactivity to Last.fm, and it’s also something Apple has been rumored to be willing to implement in iTunes for a long time. You can now listen to two new radio stations or, alternatively, edit existing ones directly from your device to restrict them to a specific tag. Two weeks ago, Last.fm announced the Radio functionality would soon become a subscriber-only feature (thus the issues with Apple’s new policies).

Last.fm 3.0 for iPhone is available for free here.