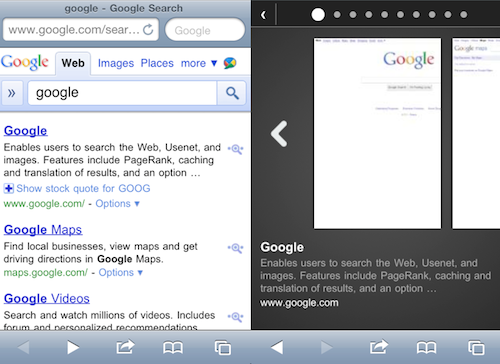 In the past months, Google has been very busy improving the experience of iOS users on products like Gmail, Google Docs and the Google homepage: Google Docs editing came to Mobile Safari, then Google launched Instant for Mobile, which similarly to the desktop lets you see search results as you type. Most recently, Google has enabled Cloud Print support for Gmail in iOS Safari and improved the mobile weather widget on its homepage.

As noted by 9to5mac, Google has also begun testing a new feature for iOS browsers (and Android as well, we guess) which hasn’t been officially announced yet but was spotted by some users. Google “Instant Previews” will let you have a quick preview of a website by tapping on the magnifying glass icon – again, just like on desktop browsers you get a preview inside a popup menu on google.com. On iOS though, it looks like the feature will really be redesigned to sport a much better touch interaction: previews will open in a dedicated window that reminds of Safari’s tabs and you can flick through them to quickly preview search results.

It is unclear at this moment whether the feature is being tested among some users in the United States or worldwide, and when Google plans to launch it or at least announce it.