Last night a bunch of blogs reported that the latest iOS 4.1 beta didn’t fix the “Death Grip” problems with the iPhone 4 antenna. We linked to those reports because I had the chance to test the new firmware in a low-signal area and, apparently, the Death Grip was still there.

Today I woke up early and decided to go out for some field testing with my iPhone 4 running iOS 4.1 Beta 1. I took a walk in strong-signal areas (very strong-signal - Viterbo is covered pretty well by 3G and HSPA) and, surprisingly enough, I wasn’t able to reproduce the grip issue.

What happened with iOS 4.1?

As for the details: I have a French iPhone 4 16GB, I’m using a 3 SIM (DVB-H model) I cut myself and I definitely had some problems with reception and Death Grip when I was on iOS 4.0. But, please note: this phone didn’t drop a single call on 4.0 even if I was kind of touching “the spot” nor it ever froze while loading a web page. The Death Grip for me was more of a cool trick to show to my friends, rather than a real Consumer Reports-worth issue. Still, I was able to reproduce it. Not anymore.

Like I said, I know what the best reception spots for 3’s network are in my town. Here, here, here and here.

If you’re on 3, you get 5 full bars and great connection speeds. You know, I used to work from a bar in Piazza del Pebliscito, as it offered a great 3G coverage. So when I bought the iPhone I tried to reproduce the Death Grip in those areas, and it worked: if I gripped my iPhone tightly, I could make it lose 3-4 bars in 30-40 seconds. In normal or low-signal areas, the process was even faster - 15 seconds for 4 bars. But like I said - that was a trick which never caused dropped calls or frozen Safari.

When I installed iOS 4.1 Beta 1 last night, I tried the Death Grip from my place, where, unfortunately, I have a spotty coverage. 2-3 bars with the new formula, that’s it. The Death Grip was still there, but slower. This morning I went with my iPhone 4 running iOS 4.1 in those strong-signal areas I mentioned above and tried the Death Grip. It didn’t work. The phone didn’t drop a single bar - I had 5 full shiny bars. “Interesting”, I said. So I tried to grip it very tightly, almost unnaturally: my whole hand (and I have pretty big hands) was gripped around the left side of the metal band. I waited 10 seconds and the phone dropped 1 bar, then it went back to 5. I waited more and it dropped 1 again, then it stayed in that way until I stopped gripping it.

It seems like iOS 4.1 on iPhone 4 in strong-signal areas definitely fixes the iPhone-dropping-bars issue. Could this be a software issue after all, like many initially reported? I don’t know - thing is, I can’t drop bars anymore. Maybe it’s the new antenna formula. Maybe it’s 3’s network in Italy.

Last, this brief “study” wouldn’t be complete if I didn’t test the actual connection this morning. Both on “Death Grip” and “normal grip” I managed to navigate, open websites and tweet like I always do when I have good signal. Last, I decided to run some SpeedTest.net tests on the go - not very indicative but there are some curious facts about them. 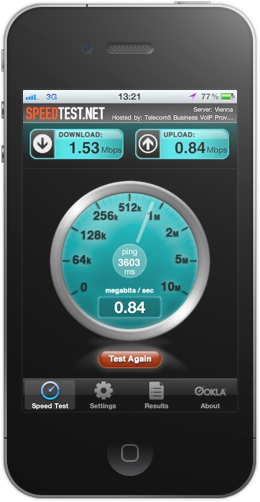 This one is with my normal grip: (5 bars) 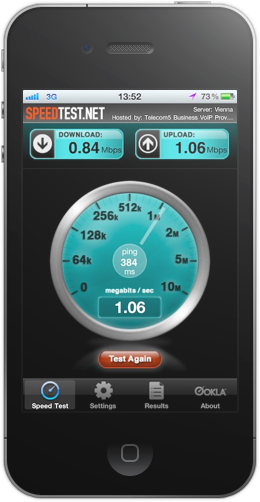 The Death Grip test has better results. I ran the tests 3 times, in the same spots, 30 minutes from each other. Very, very interesting.

To sum up, I don’t know the technical details behind this new baseband. I just know that I’ve tested the new firmware on the field, and it works way better than the old one. Bars don’t drop anymore and yet great connection is there. For me, it’s a great achievement.