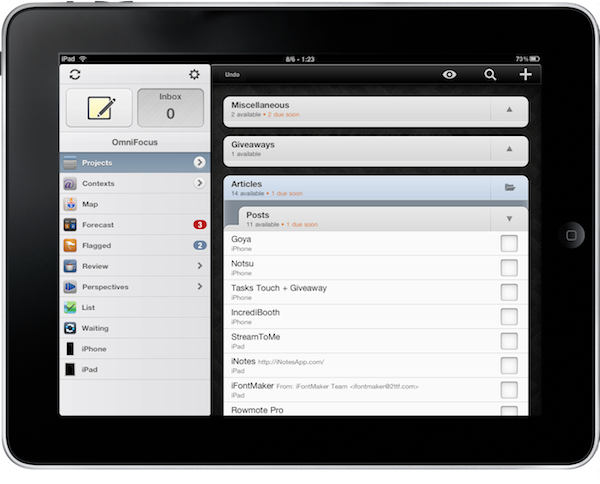 OmniFocus, my GTD app of choice on OS X and iOS, is now compatible with multitasking on the iPad. Although iOS 4.2 isn’t officially out and it looks like it won’t be at least until sometime next week, users running the latest iOS 4.2 GM can enjoy fast app switching, background sync and local notifications in OmniFocus for iPad.

The latest 1.2 update, released a few minutes ago in iTunes, adds a bunch of new features and lots of improvements, too. The changelog is really huge, so I suggest you go check it out below. Notable new features include the possibility to receive local notifications without the need of a sync server, seven new languages, a revamped editing panel and more geolocation functionalities.

Seriously, great update. The one users already on iOS 4.2 have been waiting for. Go get it. Then read why we love OmniFocus.

OmniFocus for iPad is now a multitasking-aware application, allowing it to be quickly suspended and resumed on iOS 4.2.

When running on iOS 4.2 or later, OmniFocus will complete an in-progress sync session when it is put into the background.

When running on iOS 4.2 or later, if an automatic sync is due soon, OmniFocus will start a sync session as it enters the background.

OmniFocus now uses local notifications to present due reminder alerts when running on iOS 4.2 or later, so you can receive alerts for due actions even if you’re not syncing with a server. (Synced calendar alerts are still available for devices which are running earlier versions of the operating system.)

Geolocation and business results are now displayed in your preferred language when possible.

When running on iOS 4.2 or later, OmniFocus now uses the compass arrow icon for centering the map on the current location.

Fixed a bug when running on iOS 4.2 which made it difficult to tap the Search button in the search HUD on the map.

Locations can now be assigned to contexts without first clearing the existing location.

Fixed a bug when running under iOS 4.2 that prevented the nearby context popover from appearing.

OmniFocus for iPhone now honors the synced preference to hide parent of an action when showing actions in action lists. This setting is available in the View menu for OmniFocus for the Mac.

Projects and Contexts in the sidebar are now always displayed in bold.

Fixed a bug in Review mode where modifying Inbox items could incorrectly result in projects in the sidebar appearing to have been marked reviewed.

Fixed an alignment issue when using custom icons for perspectives.

The overdue and due soon badge background colors now match the forecast segment’s background when selected.

Fixed a bug where the badge background in the forecast’s future segment was drawn in the wrong color.

Fixed a bug when running on iOS 4.2 where sidebar selection could be lost or flash upon updates to the main outline.

The Action editor can now mark action groups as either parallel or sequential.

Item editors and Quick Entry autosave in-progress edits when the application is put into the background.

Fixed a regression when running iOS 4.2 that required a double tap to enter note editing.

OmniFocus handles HTTP redirects more intelligently when replacing your local/remote database with a copy of your remote/local database, and when publishing .ics files.

Fixed a workaround for some quirks in cPanel servers.

Fixed some problems with syncing to servers with expired, self-signed, or otherwise exceptionable certificates.

Tapping on an OmniFocus sync settings URL now automatically dismisses the Welcome Screen and performs a sync if appropriate.

Fixed crashes when attempting to send email from within OmniFocus on a device where no email accounts have been configured in Mail.

Fixed an intermittent crash when switching to Forecast mode when no actions appeared under Today.

Fixed an intermittent crash when using the Send to OmniFocus bookmarklet.

Worked around a bug in iOS 4.2 which could cause the application to crash after using a contextual menu on a project or context.

Opening the Settings screen is considerably faster for databases which contain a large number of zip files.