I’ve been a NetNewsWire user for a long time. It’s my default RSS app on Mac OS X, and I downloaded the iPhone one with a lot of excitement the same day it was released in the App Store. Sadly, for as much as I love the Mac iteration of NNW (seriously, there’s no better app - yet) I was very disappointed by the iPhone counterpart of Brent Simmons’ app. It was slow, sluggish and, also, it didn’t look nice as I expected. I was so disappointed it that I uninstalled and never installed back again on my iPhone.

For this reason, and because I’m always hoping things may eventually change, I approached NetNewsWire for iPad with a lot of caution. I mean, it comes at 10 bucks, and it will soon go up to 15. It’s a considerable expense, and I didn’t want to be disappointed again like it happened before.
Fortunately NetNewsWire for iPad is a good application, a great first version, which I’m sure many people out there are already loving. I’ve been testing it for over a week now, let’s see what it looks like.

NetNewsWire for iPad is straightforward and looks good. It’s simple, offers a few yet useful features and it’s no doubt geared towards the people who already know and love NNW for Mac. It doesn’t come with any revolutionary or breakthrough idea (it’s not Headline or Reeder) but it does its job just fine. The first aspect I’d like to focus on is the interface, which is simply beautiful to me. The sidebar (or the popover) contains all your subscriptions and folders, but the graphical realization of tabs is something you really have to look at to see how good is implemented. The icons in the sidebar are very nice as well. Last, same applies to the formatting of posts, which is clean and unobtrusive. You can also download a PDF with a UI walkthrough here. 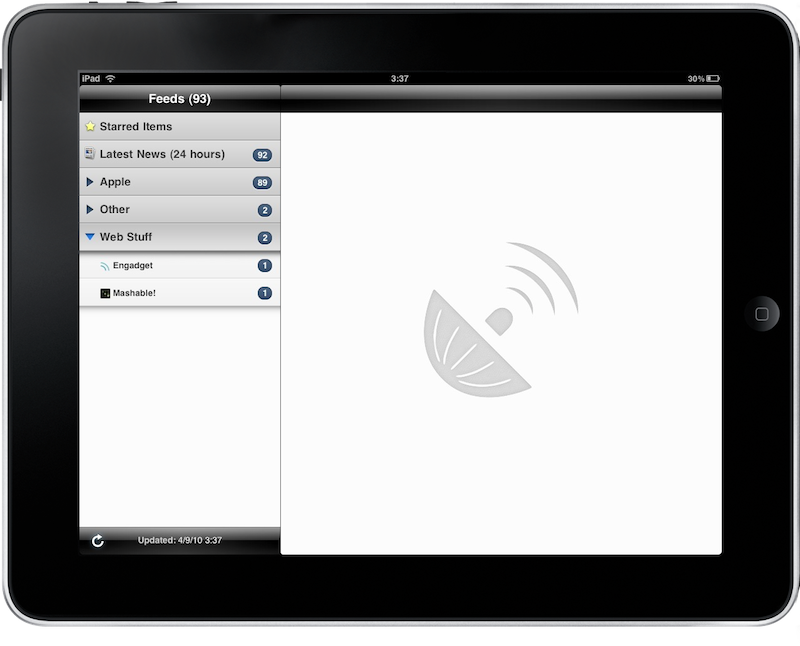 The main difference from NNW and its competitors is in the way it keep unread and read feeds into the application. You can mark all items as read, but if you refresh the app after some time, those items will still be there together with the new feeds. I’m not sure whether I like this or not (I actually found this thing useful a couple of times) but many users will either complain about this, or just love it. Guess you can’t please everyone.

As for the sharing features, NNW for iPad comes with all the basic stuff: email, Twitter and Instapaper. I’d like to see more options, and this is clearly due to the rush to submit the app for the launch day. There are no other options in the settings, and again this is due to the app being new. I bet we’ll see tons of new features within the next updates.

Overall, I suggest you to buy NetNewsWire if you’re looking for a simple and stable RSS app which will be updated soon with a lot of new features and performance improvements. If you already are a NetNewsWire user and you love it, the iPad version is a must. It works good, it looks good. Grab it while it’s still priced at $9.99.