According to iLounge, Apple is set to announce a 7-inch version of the iPad (an “iPad Mini”) later this year and release the iPhone 5 as early as January 2011; three new iPods are coming in September (iPod Touch, new iPod Nano, new iPod Shuffle…with screen, thus no Shuffle) and new-generation Bumpers are on their way, too. 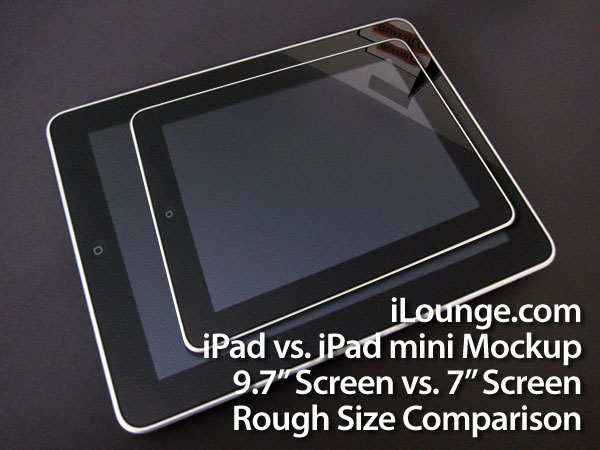 From the original report:

New iPad - A seven-inch-screened version of the iPad is substantially finished and will be ready for announcement either later this year or early in 2011. Apple has been prototyping devices with screens of this size for a long time—quite possibly predating the original iPhone.

New iPhone - According to our source—and we have to say that we find this part hard to believe—Apple is pushing up the release date of the fifth-generation iPhone to early 2011 (as soon as January) because of the antenna issues with the iPhone 4. It’s unknown whether this will be a repackaging of iPhone 4 components in a different shell or something more substantial. We reiterate: it’s hard to believe. But as with so many seemingly far-fetched early reports, it’s not impossible.

It’s not hard to believe, it just doesn’t make sense. I’m all for the iPad becoming “a line” like Macbooks and thus not needing different names (3G, 3GS, 4) but different models (Pro, Mini, Air) but seriously, announcing a Mini version of the already small iPad is non-sense. For the same reason that Apple didn’t release an iPhone Mini: that’s the form factor, you either love it or hate it. 9to5mac further speculates that the “iPad Mini” will have a 1500x2000 Retina Display, and a front facing camera. Ok for the camera, that’s pretty much obvious - Apple wants FaceTime on as many devices as possible. The Retina Display on the iPad is an interesting issue, though: if we take the current iPad screen and multiply the pixels x4, we get a 4096 x 3072 display. Assuming that such a resolution would make an actual Retina Display, developers would need one heck of a screen to create apps for it. My guess is that Apple will double the pixels on the next iPad, but they’re not going to release a Mini version with a Retina Display.

As for the iPhone 5 in January, there’s not really much to discuss. It’s just a silly rumor, just like many others we hear every single day. The iPhone 4 is doing well, so is the iPad, and we just have to wait until next year to see the new iterations.