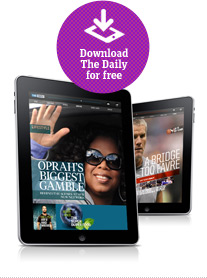 The Daily by News Corp. is one of the hottest rumors in the Apple tech sphere these days. Initially rumored to launch in December 2010 alongside iOS 4.3 and now apparently scheduled for a late January official announcement (with iOS 4.3 now out in beta), The Daily has been making the rounds also thanks to speculation that Steve Jobs might be directly involved in the realization of the iPad-exclusive newspaper. The Daily is also expected to bring a new feature based on “app subscriptions” that would allow users to set up automatic, recurring payments within iTunes.

Damon Kiesow over at Poynter has done some digging into the recently launched TheDaily.com website and discovered a teaser image of the iPad app clearly left by the web designers on the site’s CSS file. The image suggests a heavy use of images and banners in the app, with a scrubber at the top to move between pages and, perhaps, an interactive cover where users could tap on different sections. The image is tiny anyway, and it doesn’t tell much.

Kiesow speculates other features may have been unintentionally leaked in the CSS file:

The URL for the image, named “side_ad.jpg,” was embedded in the CSS for the new website. And, a few other clues may also have been buried in the site’s source code.

A section labeled “Story Carousel” includes links to icons that seem intended to function as forward and back buttons for paging through a selection of articles.

Again, various sources point to a January 19 presentation of The Daily with an event in San Francisco. An official Apple event would require journalists to be already in the know right now, and no press release from Apple went out yet. Is Apple perhaps waiting for iOS 4.3 to reach a more stable form? And if The Daily depends on a new subscription system, does it mean Murdoch has to wait before Jobs says it’s cool to announce anything? We don’t know, but details of The Daily are starting to leak just about every day now. [via The Next Web]