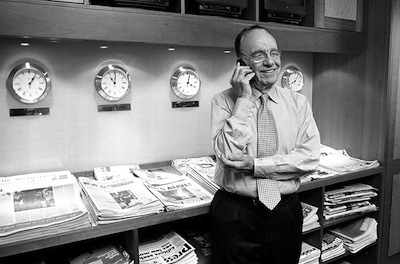 Three days ago we reported News Corp, one of the world’s biggest media outlets, was working on a tablet-only publication Murdoch and his team were really excited about. In the past days more details have surfaced about the app, which should be launching in a few weeks in private beta mode and be publicly available soon after that.

It appears that Murdoch hired a staff of over 100 journalists to handle the publication, which has no print edition but will only be available in digital form-factor. The Daily, this is the name of the app as revealed by Murdoch himself in an interview with Fox Business, is one of News Corp’s “most exciting projects”. Basing on the information also posted by WWDMedia, the app will be a daily news report pushed directly to the iPad without the need of having a previous print subscription.

News Corp. has spent the last three months assembling a newsroom that will soon be about 100 staffers strong. The Daily will launch in beta mode sometime around Christmas, and will be introduced to the public on the iPad and other tablet devices in early 2011. It is expected to cost 99 cents a week, or about $4.25 a month. It will come out — as the name suggests — seven days a week. The operation is currently working out of the 26th floor of the News Corp. Building on Sixth Avenue in a space that looks like a veritable construction zone. The staff’s permanent home will be on the ninth floor, and they’ll move down once it’s ready.

The fact that Murdoch has hired Jesse Angelo, managing editor of The New York Post, to handle The Daily operations suggest that this is a project Murdoch is really betting on. Other people familiar with the matter claim that “Angelo wants a tabloid sensibility with a broadsheet intelligence”.

The most interesting tidbit, though, comes the Guardian, which reports the Daily is the result of a “collaboration that has been secretly under development in New York for several months” between Murdoch and Steve Jobs. We speculate Steve Jobs might not be directly involved with the project (e.g. he didn’t sit down with Rupert Murdoch to write lines of code for the Daily) but we assume News Corp’s iPad-exclusive publication priced aggressively at $4 per month could be the first step towards Apple’s opening to subscription-based apps for publishers.

After all, the iPad was meant to save the publishing industry, but until now we’ve seen pretty regular digital versions of print editions land in the App Store. Murdoch’s The Daily could simply step the game up.