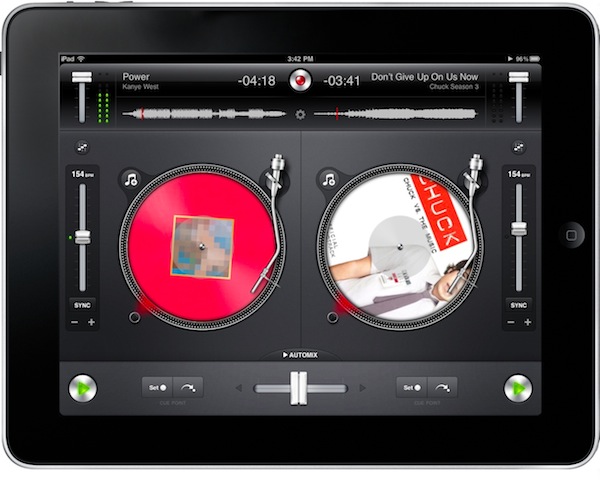 When the iPad was announced back in January, many of us realized that the device would be perfect for professional DJ software. A large multi-touch surface, a brand new device developed by Apple backed up by the App Store – obviously the iPad was meant for DJ and music applications. Even more than the iPhone (which saw the rise of music making software anyway, in spite of the 3.5-inch screen) the iPad was too perfect for turntable interfaces to not take the risk and start developing one soon after the announcement.

What happened is history: just take a look at DJ Rana June’s Youtube channel and open the Music category in the App Store to get the idea of the success of professional music making / mixing software on the iPad. There are hundreds of apps out there that allow you to record and mix music, and there are dozens of quality DJ apps in the App Store.

The just-released djay by Algoriddim, however, takes the game a step further. It comes with an impressive feature set and underlying technology, it takes advantage of iOS 4.2 audio and streaming functionalities, it’s got stunning user interface and animations. Here’s why you should check it out no matter if you’re into DJ software for iOS devices (and Mac) or not.

Obviously, I’m not a DJ. Sure, I’ve been interested in the subject for a long time, considering that some friends of mine have been playing around with mixing hardware and software for years now. Overall, I guess since the iPhone and iPad proved that it’s possible to achieve great DJ setups with “just” apps my interest raised to an unexpected level. That’s why I was excited to see djay by Algoriddim in action and that is why I’m recommending the app to you now that it’s available: from what I’ve seen so far, djay is the most impressive – technology-wise – DJ app for iPad out in the App Store.

The app is based on the strong foundation of Algoriddim’s software for Mac, but as the developers also state this iPad version is technologically more advanced than its Mac counterpart. djay for iPad features full access to the iPod Library (allowing you mix and record mixes from any song you’ve synced via iTunes), support for iOS 4.2 multitasking and AirPlay (you can stream mixes live to any Apple TV, Airport Express or AirPlay-compatible speaker) and support for accelerated CPU extensions to guarantee high-quality audio analysis. Just like the Mac version, the app lets you pick two different tracks and automatically sync the beats per minute (BPM) between them. This process is based on a very advanced technology that analyzes the tracks in real-time and calculates the position of the beats in a few seconds. These functionalities allow the users to enjoy other features such as auto-sync (a button next to each track that automatically syncs beats between tracks) and beat-synchronized scratch. 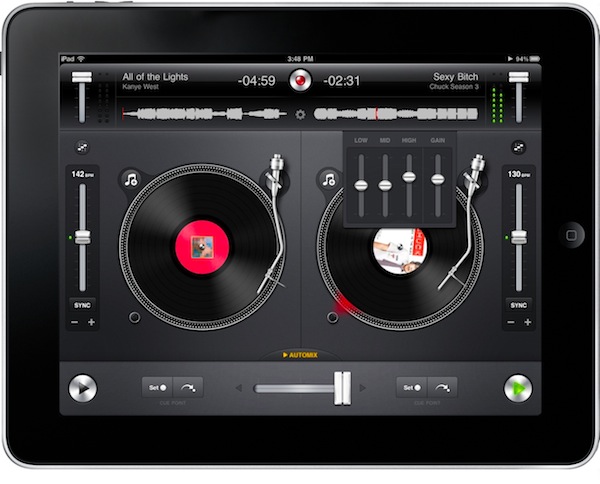 djay for iPad, of course, allows you to scratch, play around with a 3-band equalizer and access master audio controls for global audio adjustments. In my usage, I found the app to be really fast at analyzing tracks (it usually takes around 3 seconds for BPM analysis to complete) and reliable even with the most complex functionalities. Like I said I’m no DJ, but I enjoyed playing with scratches, the slider at the bottom that enables you to automatically fade beats between tracks and the AutoMix function.

AutoMix, for instance, is perfect for parties: you fire it up, turn on Shuffle mode and leave the iPad playing. djay will apply transitions between songs, and you can also choose from a variety of different transitions that include brake, backspin and reverse. This app also comes with recording capabilities: you just need to press a button to start recording your whole session. djay will save an high-quality AIFF file for you to access later.

I think the great value of djay lies in its own software nature: it’s not a complicated piece of hardware you have to set up and manually wire, it’s a great app that can be used in professional environments and by casual users like me at the same time. I’m sure “pro” users will delve deeper into the app to test all the impressive tech that’s behind it, but for someone like me – who’s not really a DJ nor does know all the terminology necessary to understand all the features of djay – this is just so cool, and useful.

At $19.99 in the App Store, djay is without a doubt an excellent application that will reveal itself in its all glory to skilled users. The cool thing is, though, everyone can enjoy it.