Well, that’s pretty much stating the obvious, right? Not quite. iPad competitors (like the “inspired” Galaxy Tab) are coming out fast, some of them will be out by the holiday season and we all know that manufacturers can’t wait to start releasing hundreds of these products in the market. So one may think Apple will have to face some hard times going forward. 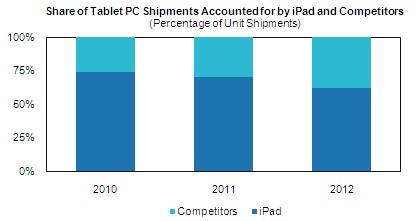 According to iSuppli, the iPad is “unlikely to face a viable competitor until 2011”, thus allowing Apple to mantain a dominant share in the market at least through 2012.

“Although the iPad has been on the market for only a few months, powerful interests throughout the technology business are devoting enormous resources to challenge and topple Apple’s domination in this fast-growing marketplace,” said Rhoda Alexander, director of monitor research at iSuppli. “However, if recent history is any lesson, it will take some time for these companies to get their products to market, longer for them to offer necessary software support and infrastructure, and an even lengthier period to begin to rival the overall user experience Apple is able to deliver.”

And this without considering that Apple may release new iPad products by this holiday season (the rumored iPad-mini) or as early as first months next year, making the “iPad” a line, just like with MacBooks and iMacs.

Also according to iPad, the only “important” competitor will be the WebOS-based tablet HP is working on. I agree, it’s going to be an interesting competition between these two.