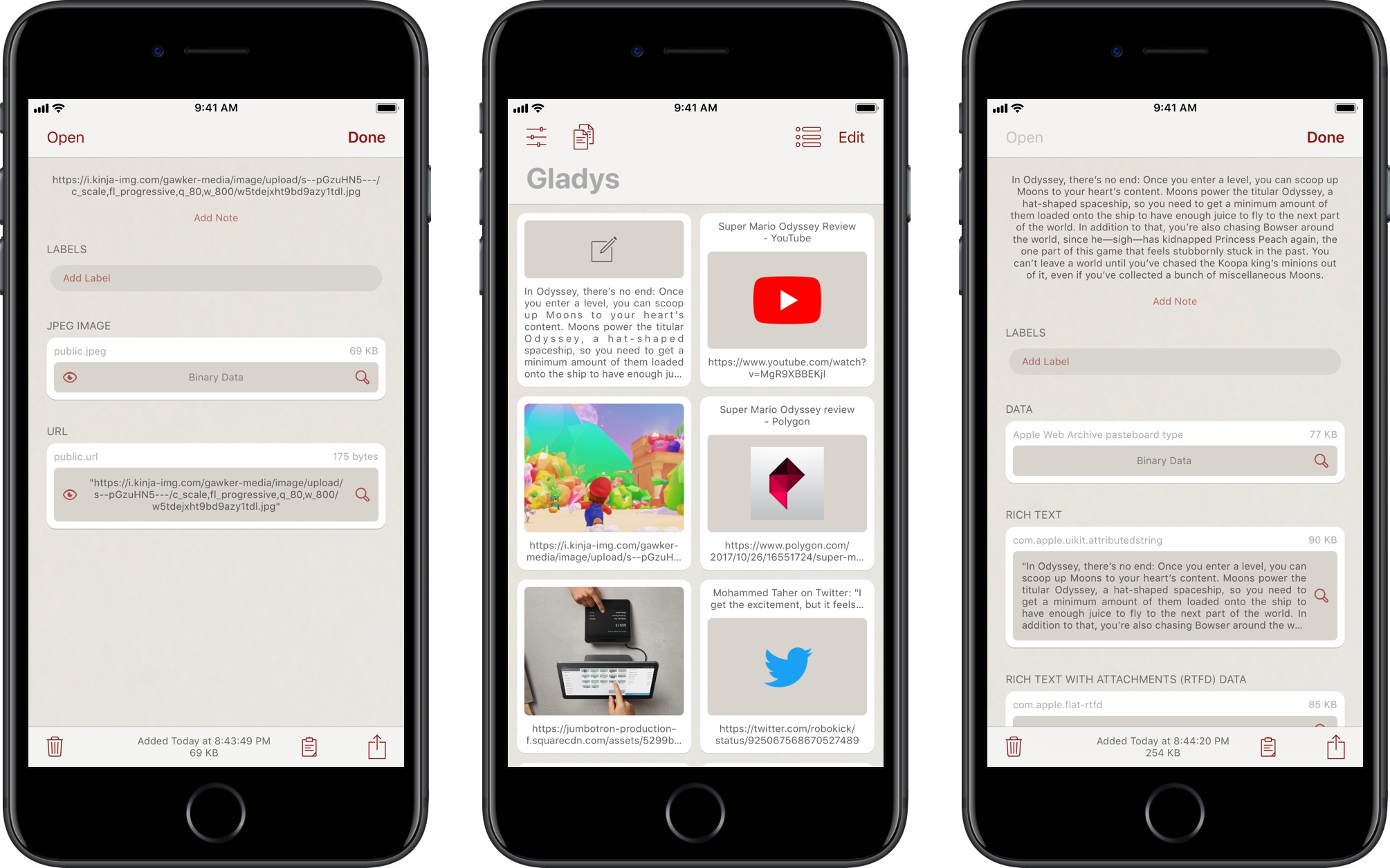 Gladys, developed by Pavlos Tsochantaris, is one of the shelf apps we’ve been covering on MacStories since the release of iOS 11 and, as I wrote last week, the one I’ve been using on my two iPad Pros. Not only does Gladys implement many of the ideas I would have liked to see in a native shelf for iOS 11, but the app has gone beyond my expectations with the ability to save multiple data types for dropped items, as well as a file provider extension to view all your saved items in iOS 11’s Files app.

With today’s version 1.1, Gladys is also gaining a permanent spot on my iPhone’s Home screen (which I shared in Issue 100 of MacStories Weekly for Club MacStories members). Gladys is now a universal app for the iPhone and iPad, and it can sync items across devices thanks to built-in iCloud integration. In my early tests with the app, everything worked as expected: CloudKit-based sync is fast and reliable, with changes made on one device (such as a link dragged from Safari into Gladys on the iPad) propagating in less than two seconds to the other.

From a feature standpoint, Gladys for iPhone is a near 1:1 adaptation of its iPad counterpart, with the obvious difference being the lack of multi-app drag and drop to save content into Gladys – an option that is not available for iPhone apps in iOS 11. However, in-app drag and drop is present in Gladys for iPhone as a way to rearrange items within the app, and it’s been combined with the Taptic Engine to add an extra dimension to dragging thumbnails in the main view, which is a pleasant effect. Every other functionality from the iPad app has been ported to the iPhone, including the ability to label clippings (labels also sync over iCloud), the action extension to save content from other apps via the share sheet, and the extension in Files.

In addition to adding an iPhone app, Gladys 1.1 improves how you can preview individual representations of items saved using drag and drop on the iPad. From an item’s detail view, types compatible with iOS’ Quick Look now feature a preview icon that you can tap to visualize the item inside Gladys. This works for text, images, videos, and even URLs (which open in Safari View Controller). This feature is even more impressive when you drag something into Gladys from another iPad app, then use the detail view to inspect and preview all the flavors of the item captured by drag and drop – it’s a great way to understand how the framework works behind the scenes.

I was somewhat skeptical about saving temporary, but still important work documents and bits of text in Gladys before, but with an iPhone version and iCloud sync, those doubts have vanished. Like Apple Notes, Copied, Bear, or iWork, Gladys is now another iCloud-powered app that syncs between my devices; I’m inclined to drop all kinds of draggable items when I’m working on my iPad because I know they will be available on my iPhone too. There are still features I’d like to see in Gladys (currently, the app has no way to group items in folders; the iPhone version has no 3D Touch quick actions), but, considering Tsochantaris’ rapid development pace, I have a feeling we’re going to see more updates over the next few weeks. I’m going to use Gladys a lot more after version 1.1, and I’m putting it on my iPhone’s Home screen today.

Gladys 1.1 is available on the App Store.