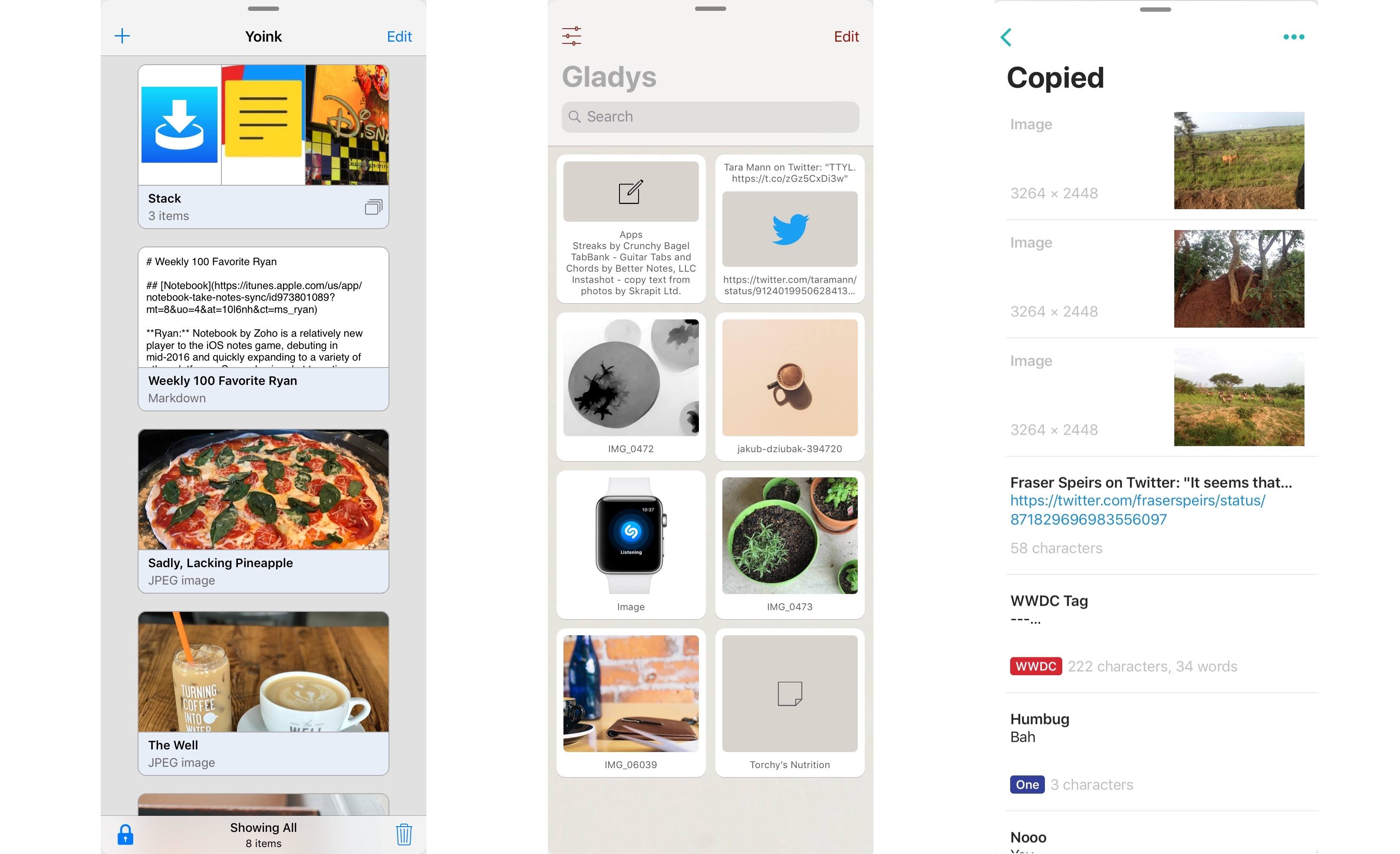 Last month after iOS 11’s launch I pulled together a roundup of iPad apps belonging to a whole new category of apps. Dropped, Workshelf, The Shelf, and Scrawl Pouch all launched as manifestations of Federico’s dream for a drag and drop-powered temporary holding place for content on the iPad. If you’re unfamiliar with this concept, here’s how I described it in my last shelf roundup:

The need for a shelf springs from the addition of drag and drop to iOS 11. It’s not always practical to drag content directly from one app to another; sometimes you know you’ll need that content soon, but you’re not ready to drop it elsewhere yet. Additionally, in some situations you may wish to drop the same data into multiple places over a short period of time, and it can be cumbersome to re-open the data’s source app to pull it out multiple times. A shelf can solve these problems: it serves as a temporary resting place for anything you know you’ll need quick access to soon. In this way it can serve a role similar to the macOS desktop, which is commonly used as a temporary holding zone.

While all the apps I originally highlighted continue to fill this role well, several additional quality apps have launched that bring new things to the table in this young category of apps. 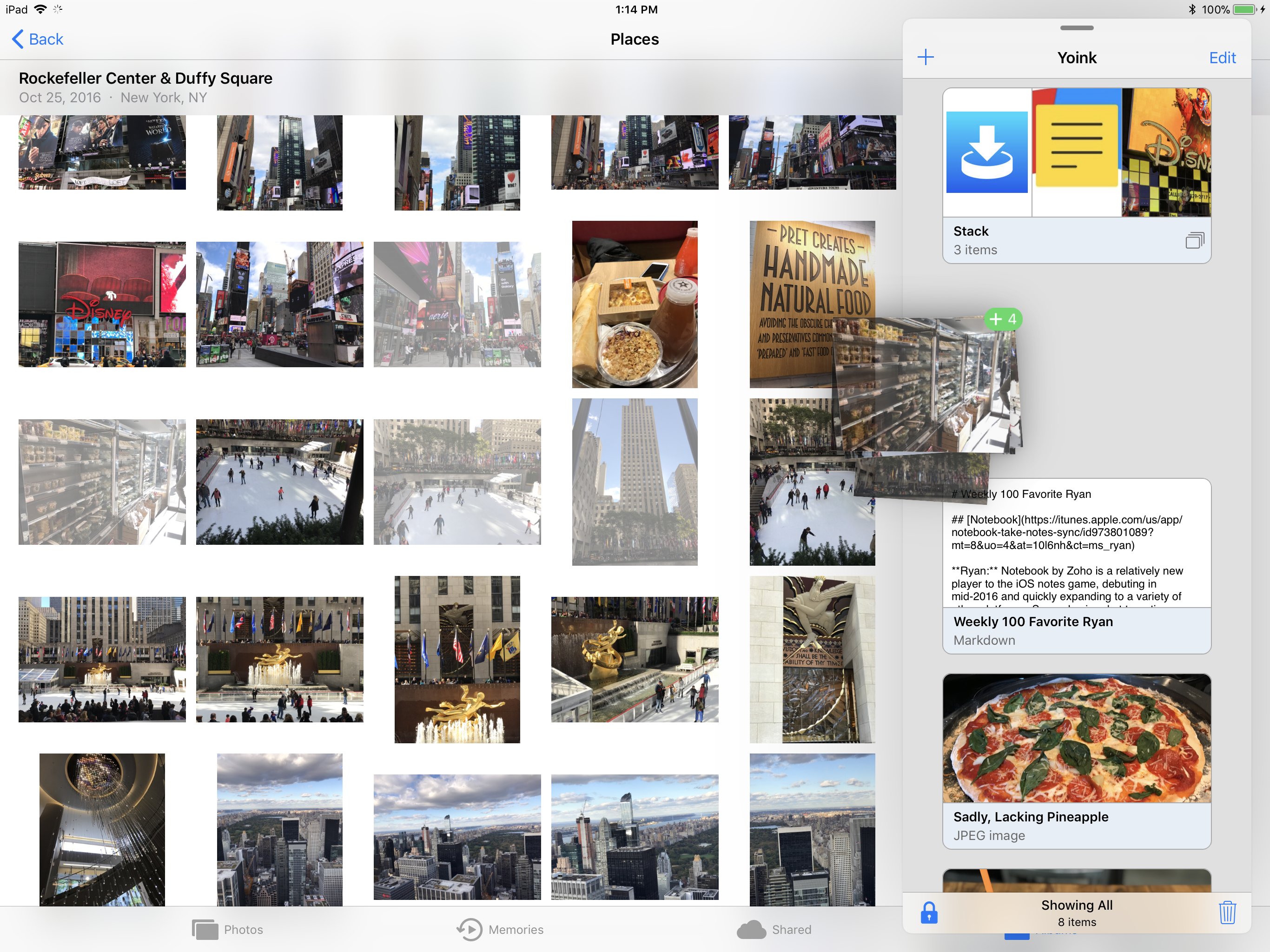 Yoink has a proven reputation that long precedes its iOS debut – it’s also available on the Mac, and even received a recent review by John. While its iPad version differs in many ways due to the distinct features of the iPad platform, with both versions of the app the core concept remains the same: Yoink lets you drop content into it for quick access later.

Due to their limited utility, shelf apps don’t need to have particularly interesting or complex interfaces, as they primarily serve to simply store and access content using drag and drop. Exploring Yoink’s interface, however, reveals several noteworthy touches that demonstrate a deep level of polish and thoughtfulness. First, there’s a plus button in the upper left corner of the app to manually add content from elsewhere in the system, including options to Add from Clipboard, Browse Files, and Add from Photos. There’s also a lock button in the bottom-left corner that determines the app’s behavior when dragging items out of it: if the padlock is closed, content dragged out of Yoink will be copied elsewhere while remaining in Yoink; if the padlock is open, content dragged out will be removed from Yoink. There are also two other ways to remove items from Yoink: hitting the Edit button exposes the option to remove items individually, while the trash can button lets you perform a clean wipe of all stored content at once, or simply remove all currently selected items.

The Edit button exposes a few other features I’m particularly fond of. One is the option to rename a saved item by hitting the pencil icon. As I shared in my last roundup, I really appreciated this feature in Scrawl Pouch, so it’s great to see it here. Another feature is that you can use drag and drop to rearrange stored items while editing. The final hidden feature in the editing interface is a simple, yet powerful method of shelf organization. While in edit mode, after selecting multiple items, you can hit the button in the lower left corner of the app to combine them all into a single stack. This stack acts as a sort of folder containing the separate items. You can tap the stack to view and choose from each individual item, or you can simply pick up the stack with one lift gesture and drag all items away at once. Stacks are also automatically created when you drop multiple stacked items into Yoink at once; if this isn’t the behavior you prefer, it’s very easy to break up a stack – in editing mode, just hit the orange icon embedded in the stack with two opposite-facing arrows. Stacks are a powerful tool made simple in Yoink; my only wish for future improvement is that I could use drag and drop to combine items into a stack, the way iOS apps combine together in a folder when you hold one app icon over another. 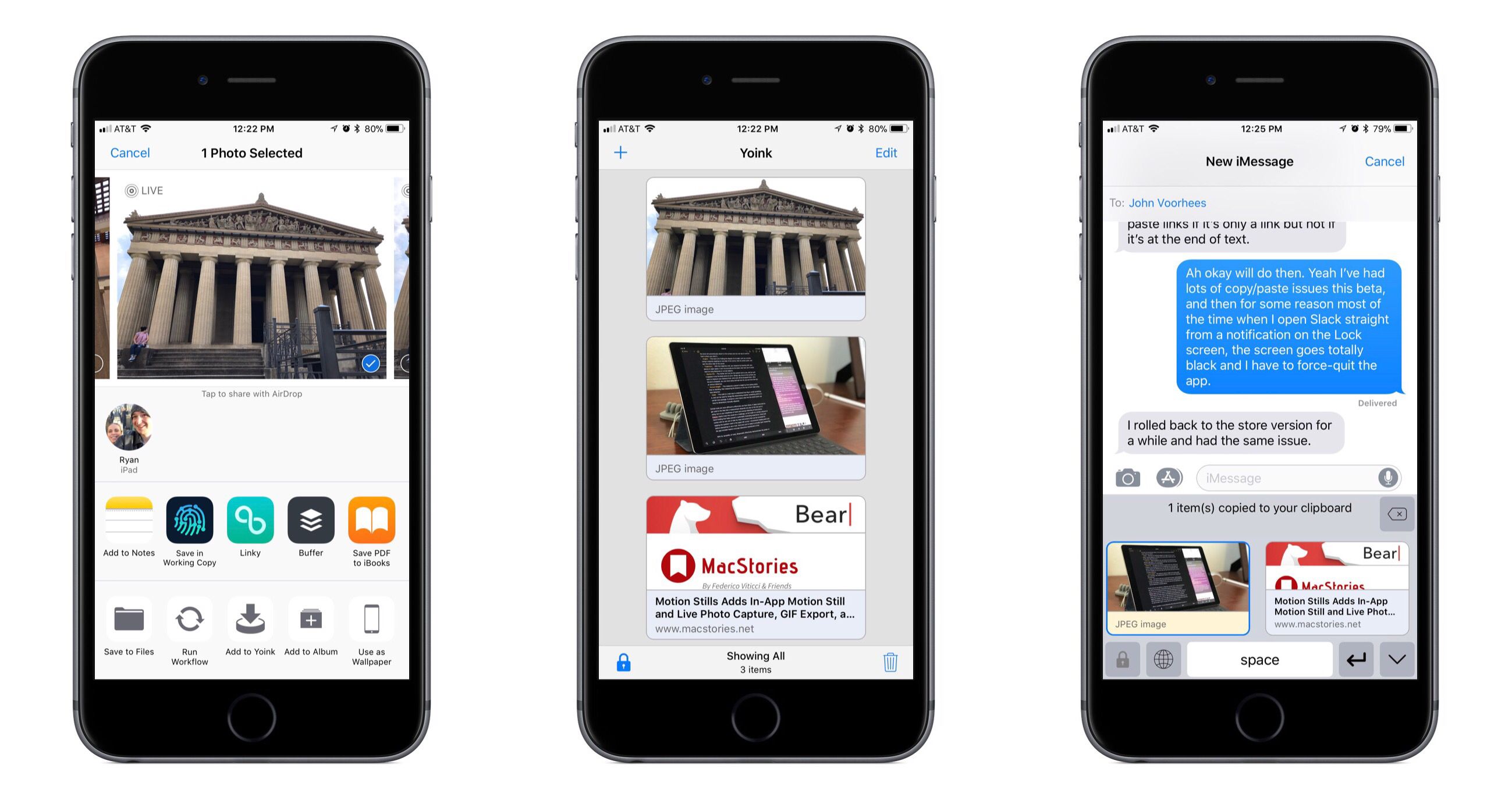 Yoink adds to its value in several key ways. Most notably, it has an iPhone counterpart. Now obviously, due to multi-app drag and drop being limited to iPad, Yoink on iPhone can’t work in exactly the same way as its iPad version. But there are two main reasons why I’m glad Yoink is available on iPhone: the app’s action extension and keyboard extension.

While these extensions are great additions to the iPad version of Yoink, they are especially useful when working on the iPhone. Each one serves as a replacement for the drag and drop functions that aren’t available on iPhone: the action extension is used as a way to get content into Yoink, while the keyboard extension lets you then get it out. On iPad you can actually drag content directly out from the keyboard, while on iPhone tapping an item copies it to your clipboard.

The biggest drawback to Yoink on iPhone, which I strongly hope is remedied in the future, is that there’s no syncing mechanism to populate data across multiple platforms. This means the data you save in Yoink for iPad stays on iPad, and anything saved to Yoink on iPhone stays on iPhone.

One other quick note about Yoink: it has the best rich content previews I’ve seen in a shelf app. Previews are large, which may be a negative for those wanting to see more content on-screen at once, but I think they work well. Each preview also includes both the title and content type of each file. And if you have a content stack, Yoink automatically adjusts previews so you can see all stacked items at once in a single preview. 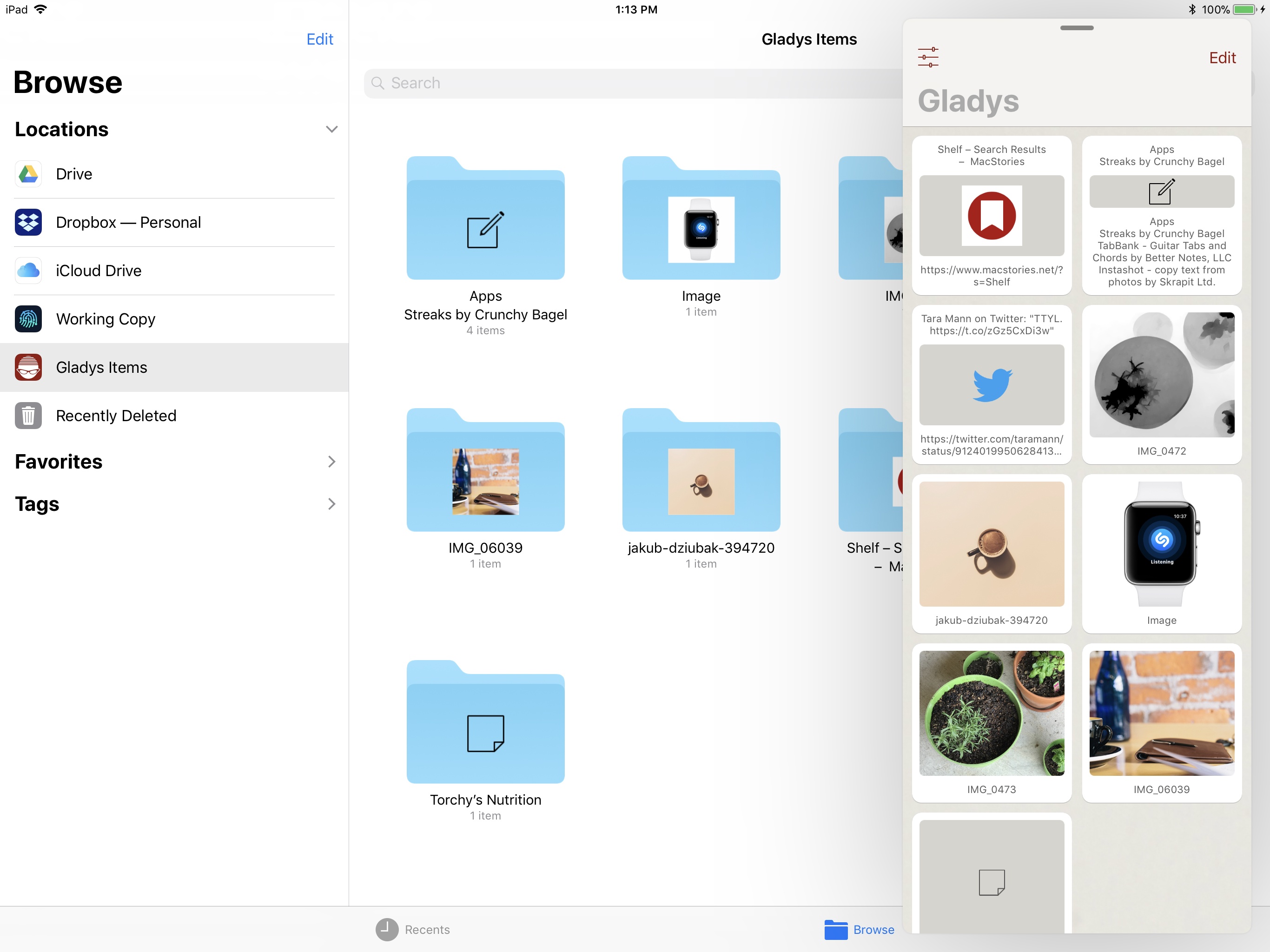 Gladys is another excellent option in the space of shelf apps. It does much of what you would expect from a shelf app, and does it well. Some standout specialties include the ability to inspect multiple RAW components of a particular file; this is done simply by tapping a saved item to enter its detail view. You can also easily access metadata like the date and time an item was added to Gladys, and its file size. Files can be renamed, and there’s even a space for adding unique notes to each file. Like Yoink, there’s an action extension for adding content to Gladys the old fashioned way. And lastly, Gladys is a great tool for working with zip archives. You can easily export all saved Gladys contents as a new zip archive, and you can drop an archive into the app’s dedicated extraction space to have all of its contained items added to Gladys.

These are all noteworthy features, and paired with the basic drag and drop mechanics, they make Gladys well worth checking out. The reason I didn’t spend more time on each feature, though, is that there’s one distinguishing feature in Gladys that particularly excites me: its file provider extension.

Gladys integrates with Apple’s new Files app as a files provider, meaning you can access data stored in Gladys from Files. Being able to view and manage your content from the full Files app is a helpful addition, and the power of Gladys’ file provider extension is even more fully realized when you consider other applications: for example, now if you’re using Files’ standard file picker to upload content, anything stored in Gladys will be right at your fingertips too.

The main reason I’m glad to see a shelf app like Gladys serve as a file provider is that it makes it much easier to treat the shelf app like a desktop-style junk drawer for files. I don’t know if it’s just me, but often when I’m saving something into Files, I don’t know quite where I want to put it yet. Usually I just throw it into my top-level iCloud Drive folder, but that adds unnecessary clutter that makes it harder to find other files when I need them. Throwing those files into Gladys is a much better solution for me, as whenever I need them, I can grab them from the standard file picker, and then if I decide I’m going to save them somewhere more permanent, I can do that from right within the full Files app using drag and drop.

There is one oddity regarding Gladys’ file provider extension: Each file in Gladys is stored in a separate folder within the Files app. In cases where a file can be extracted using several different data types, this structure can be beneficial as each of those different types are available from within Files. But in most cases, where there’s just a single file with a single type available, the folder structure is an unnecessary barrier separating you from your content. Hopefully this oddity can be fixed in the future with a solution that creates folders only when multiple file types are available, and otherwise bypasses the need for a folder. 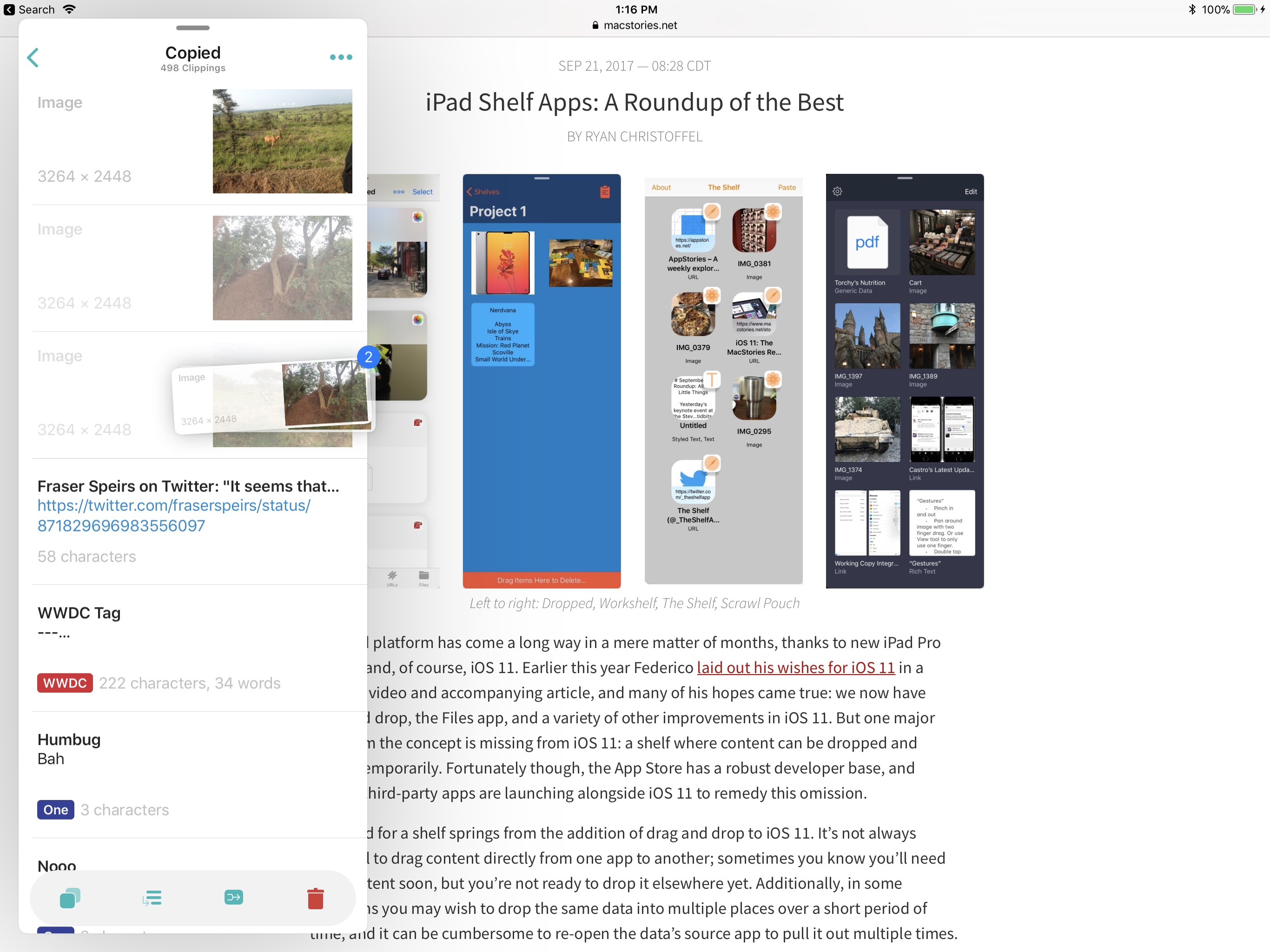 Copied isn’t a new app, nor is it technically a shelf app – it’s a clipboard manager that, thanks to the advent of drag and drop on iPad, now has an extended purpose. I won’t write much about the app, as we’ve done that plenty in the past; however, it certainly belongs in this category of shelf apps, even with its limitations.

Since Copied is primarily designed for clipboard management, it won’t accept as many types of content as the other shelf apps I’ve featured – text and photos are its forte, so trying to throw anything else at it will leave you disappointed. However, its strength is that it’s a well-established, well-designed, and highly refined app that’s the recipient of regular updates and exists on both iPad and iPhone, aided by iCloud sync. What other shelf app can claim that kind of resume? Again, it may not technically be a shelf app, but most of the needed tools are already here. Depending on your needs, it might just be the shelf app you’re looking for – and a top-notch clipboard manager to boot.

It’s still early days for shelf apps, because it’s still early days for iPad productivity and drag and drop. But the creativity and usefulness seen already, just from the handful of shelf apps featured here, gives me great hope for the future of this app category and the future of iPad productivity. If you’re an iPad power user, or if you’re a casual user who’s new to the iPad and misses the old, familiar desktop, I recommend checking out one of these shelf apps.

Yoink, Gladys, and Copied are available on the App Store.