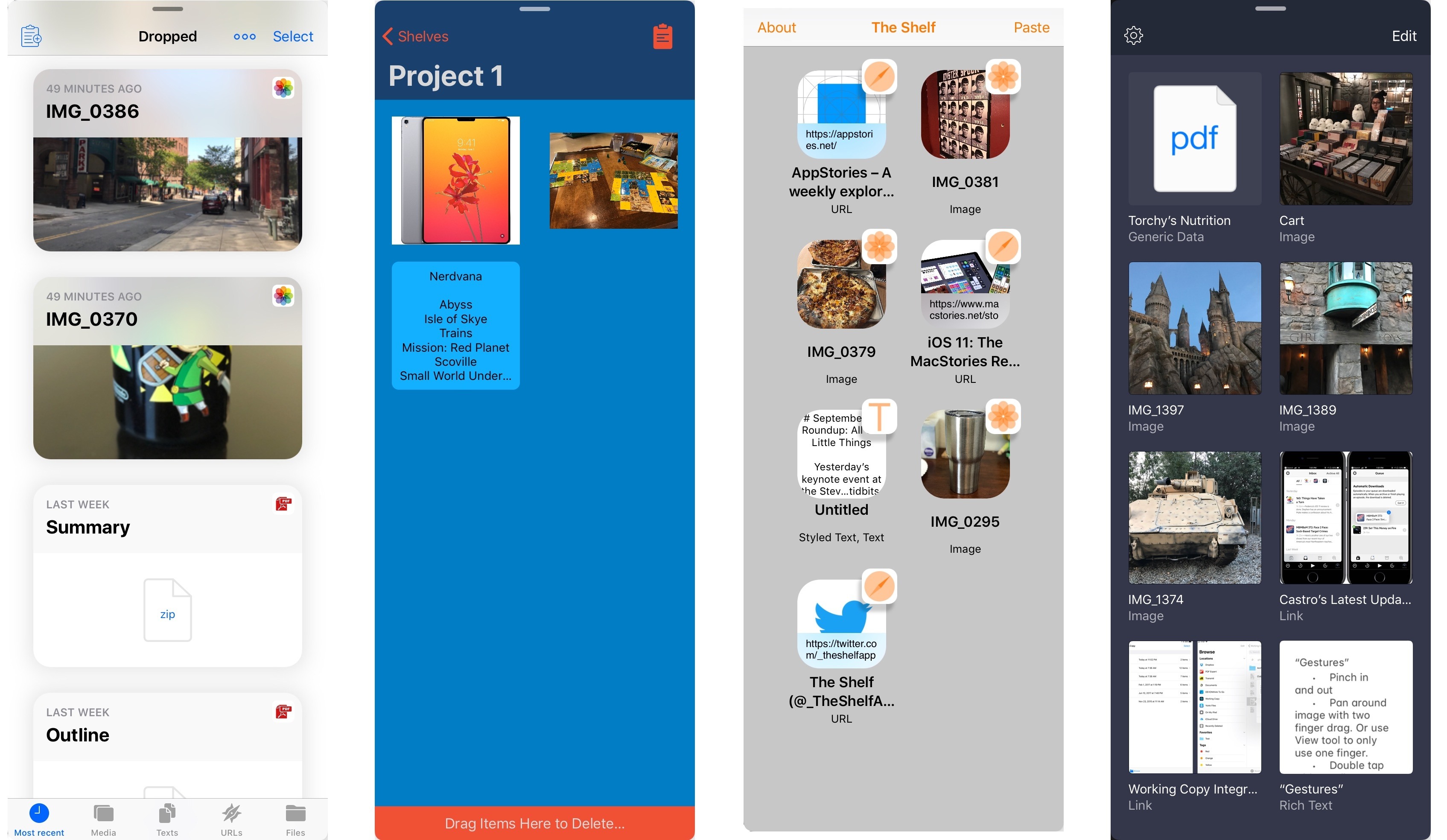 The iPad platform has come a long way in a mere matter of months, thanks to new iPad Pro models and, of course, iOS 11. Earlier this year Federico laid out his wishes for iOS 11 in a concept video and accompanying article, and many of his hopes came true: we now have drag and drop, the Files app, and a variety of other improvements in iOS 11. But one major idea from the concept is missing from iOS 11: a shelf where content can be dropped and stored temporarily. Fortunately though, the App Store has a robust developer base, and several third-party apps are launching alongside iOS 11 to remedy this omission.

The need for a shelf springs from the addition of drag and drop to iOS 11. It’s not always practical to drag content directly from one app to another; sometimes you know you’ll need that content soon, but you’re not ready to drop it elsewhere yet. Additionally, in some situations you may wish to drop the same data into multiple places over a short period of time, and it can be cumbersome to re-open the data’s source app to pull it out multiple times. A shelf can solve these problems: it serves as a temporary resting place for anything you know you’ll need quick access to soon. In this way it can serve a role similar to the macOS desktop, which is commonly used as a temporary holding zone.

While Federico originally envisioned the shelf as a baked-in iOS feature, thanks to some of the multitasking changes in iOS 11, third-party shelf apps can remarkably still offer a systemwide solution that works just as well as an iPad power user might hope.

The revamped Slide Over feature in iOS 11 is perfect for a shelf app. Slide Over allows you to tuck away a single app off the right edge of the screen and easily recall it into view no matter which app or space you’re currently viewing. An app in Slide Over is the only app that remains present no matter which other apps you’re viewing, so that as you’re working throughout the day and encounter text, photos, files, or other content you wish to save for later, you can simply pick up that content using drag and drop, swipe from the right edge of the screen to bring in your Slide Over shelf app, and drop the content there. It will then be waiting for you in one centralized, easily accessible hub whenever you need it.

Developers have created many excellent shelf apps designed to take advantage of iOS 11’s new capabilities. Here are a few of the standouts: 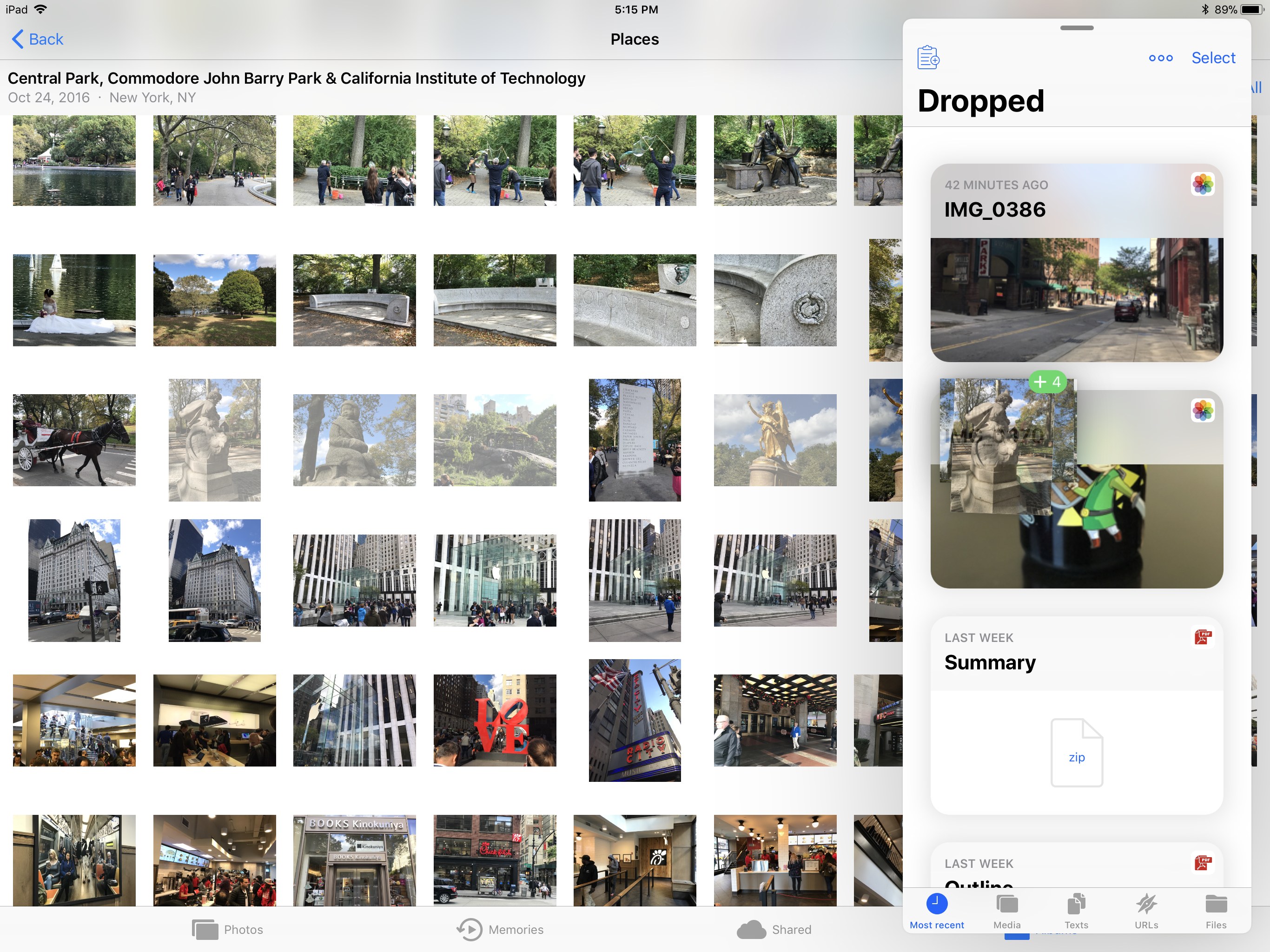 Dropped is a shelf app that feels very much at home in iOS 11. It uses the same style of fonts, glyphs, and headings as apps like the App Store and Apple Music, giving it the appearance of a first-party app.

Dropped is the only app on this list with auto-generated sorting of content types within the app. While the average user who keeps their shelf app tidy may not need the feature, heavy shelf users will value the effortless organization enabled by Dropped. There are five navigation tabs along the bottom of the app: Most recent, Media, Texts, URLs, and Files. If you’re working with a large assortment of files, it’s easy to find what you’re looking for with no additional work required to sort things.

While most of the time you’ll be transferring content from Dropped via drag and drop, there are several built-in alternative methods of interaction. One is for getting content into Dropped: you can hit the clipboard icon in the top left corner to add your clipboard contents to the app. In the area of getting content out, you can do that by tapping an item. The tap will bring up an action menu with several possible options, including Copy, Share (which loads the share sheet), and Delete. Additionally, depending on the content type, you can choose to either view the content using Quick Look or open it in its native app – for example, URLs present the option to open in Safari. 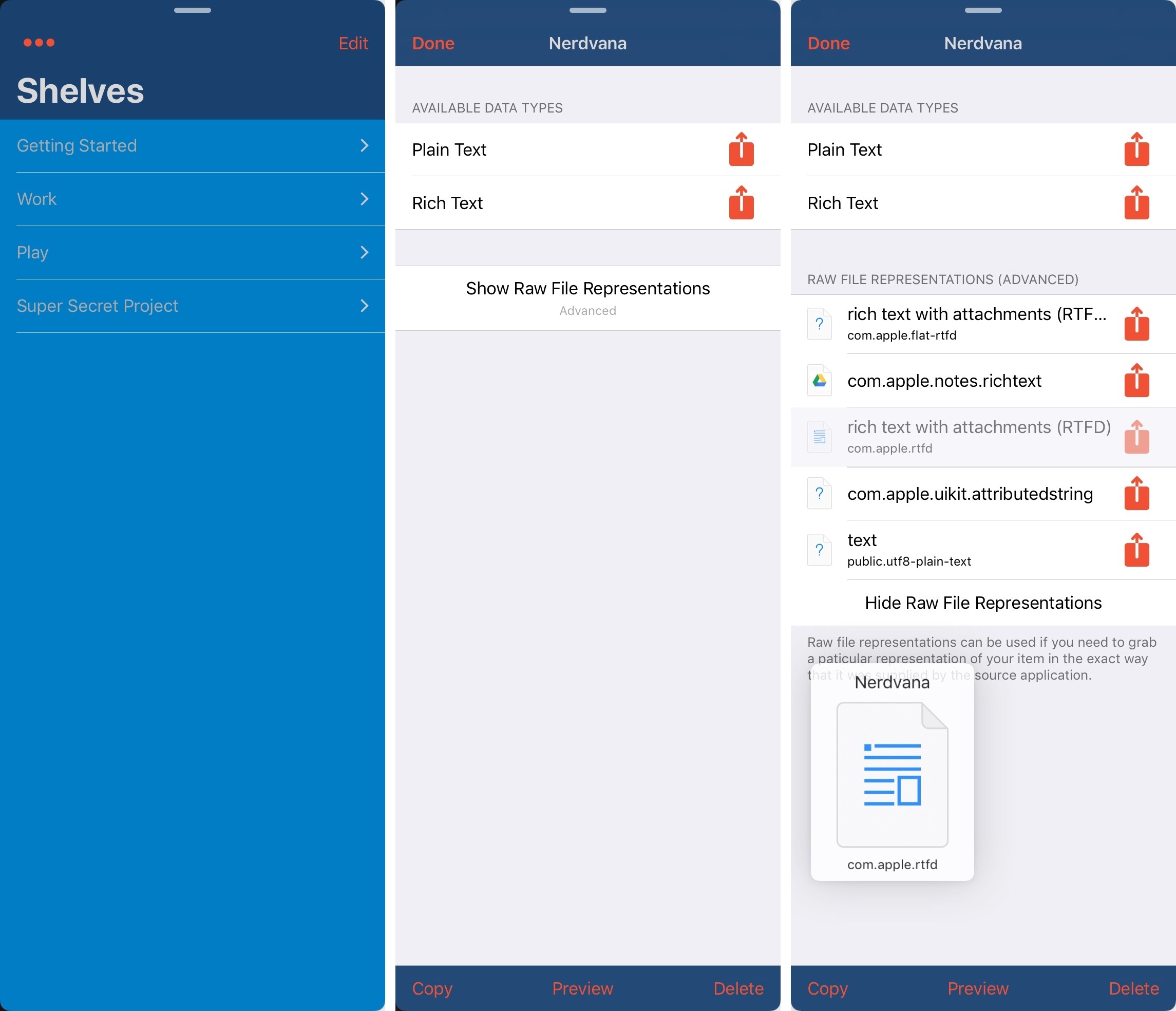 Workshelf is unique in that it allows the creation of multiple shelves, making it ideal for keeping content for different projects you’re working on at once. Inside the app, simply hit the Edit button to add new shelves or rearrange your existing shelves. It’s similar to the different tabs of Dropped, but you get to choose exactly how items are sorted among various shelves.

Another unique benefit of Workshelf is its inclusion of richer options for transferring stored content. Tapping an item pulls up a list of its available data types, both in basic and advanced forms. The basic form is listed at the top, and includes things like Plain Text and Rich Text for a text selection. Next to each is a handy share icon, so you can share the file in that specific format using the share sheet. Or, of course, you can drag the whole row out of the app to move the content, in your specified format, via drag and drop. These same interaction models also work with the advanced, raw file representations.

Like Dropped, Workshelf includes a button to import the contents of your clipboard into the app. When you’re ready to remove content, just drag it to the red bar at the bottom of the app. 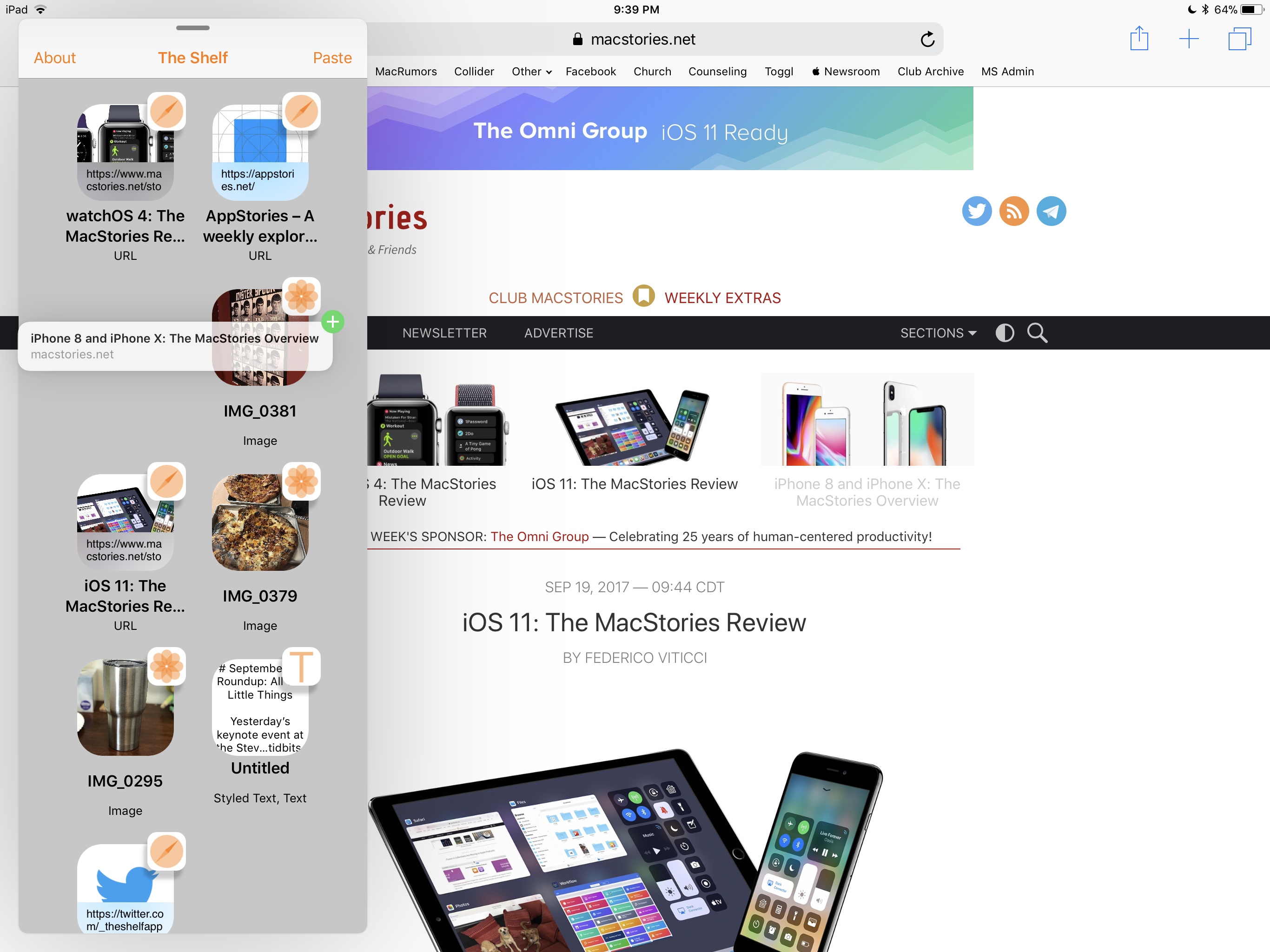 The Shelf is another excellent shelf app – it opts for a minimal UI that has little in the way of hidden menus or options. What you see is what you get, with nearly everything displayed in the app’s main view: all your saved content, and a Paste button in the upper right corner. The only other interface appears when you tap stored content. For example, tapping an image will load a larger preview of the image with two options up top: Copy and Share.

The feature I love most about The Shelf is its use of contextual drop targets. Whenever you pick up content from The Shelf and begin a drag, two drop areas resembling large buttons appear at the bottom of the app: one containing a share icon and the other a trash icon. The option of easily exporting content through the share sheet is extremely handy for apps that either don’t support drag and drop yet, or that you don’t want to have to manually open, and I especially love how all of these options are tied to the one simple action of dragging and dropping.

The Shelf, along with Workshelf, includes rich previews that are a lot smaller than those of Dropped, which for different users could be either a good thing or a bad thing. If you want to fit more items on-screen, The Shelf and Workshelf will likely provide just the approach you’re looking for; on the other hand, a higher valuation of large content will drive you to Dropped. The Shelf also tags all saved items with sizable icons to represent file type, allowing you to identify content type at a glance. 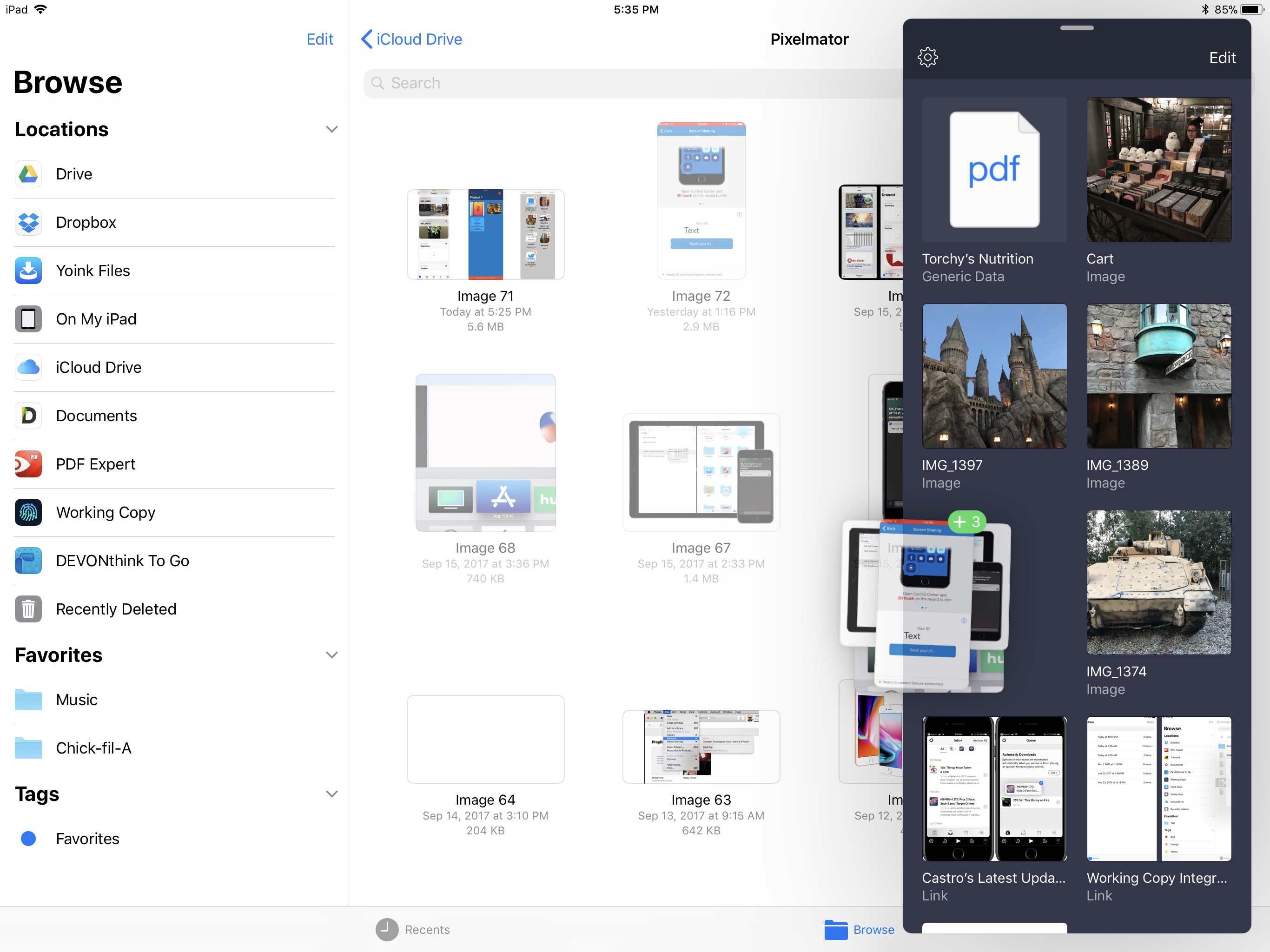 Similar to The Shelf, Scrawl Pouch opts for a very minimal approach in terms of menus and options. There’s one screen, housing all your stored content – and that’s it. There’s an Edit button on that screen for the purpose of deleting content, and not much else. The app provides beautiful rich previews of content, perhaps the best I’ve seen in a shelf app, but that’s likely because you can’t tap on content to view full Quick Look previews for it. Instead, tapping an item presents a simple menu containing a few options: Cut, Copy, Delete, and Rename.

And this brings me to why I love Scrawl Pouch.

The app is attractive. It looks nice, and its rich previews are great. But there’s one extremely minor option that I value, probably more than I should: the Rename button. I’m an organizer, such that even if I know content is only going to be in my shelf app for a single day’s work, I still want to be able to customize a file’s name. In particular, images pulled into the app benefit from this: the name ‘IMG_1397’ means nothing to me. With Scrawl Pouch I can either rename that photo to reflect its content, or even rename it in a way that reminds me why I threw it into the app in the first place. It’s really a small thing, but to me it’s huge.

Shelf apps make up a new App Store category that is perfect for iPad power users – but they also may be tremendously useful for the casual user. The concept is so simple, and is such a perfect fit for iOS 11’s new and improved Slide Over, that I can see shelf apps being intuitive and helpful for all sorts of users. The less-than-tech-savvy crowd can be shown how to add a shelf app to Slide Over and keep it there as a permanent fixture – the functional similarity to a macOS or Windows desktop proves it’s a concept any computer user can understand.

While Apple creating its own shelf solution would surely have been a nice addition to iOS 11, it’s not needed. Thanks to the the creativity and customization of third-party shelf apps, I’m left with no regrets over the lack of a first-party option.