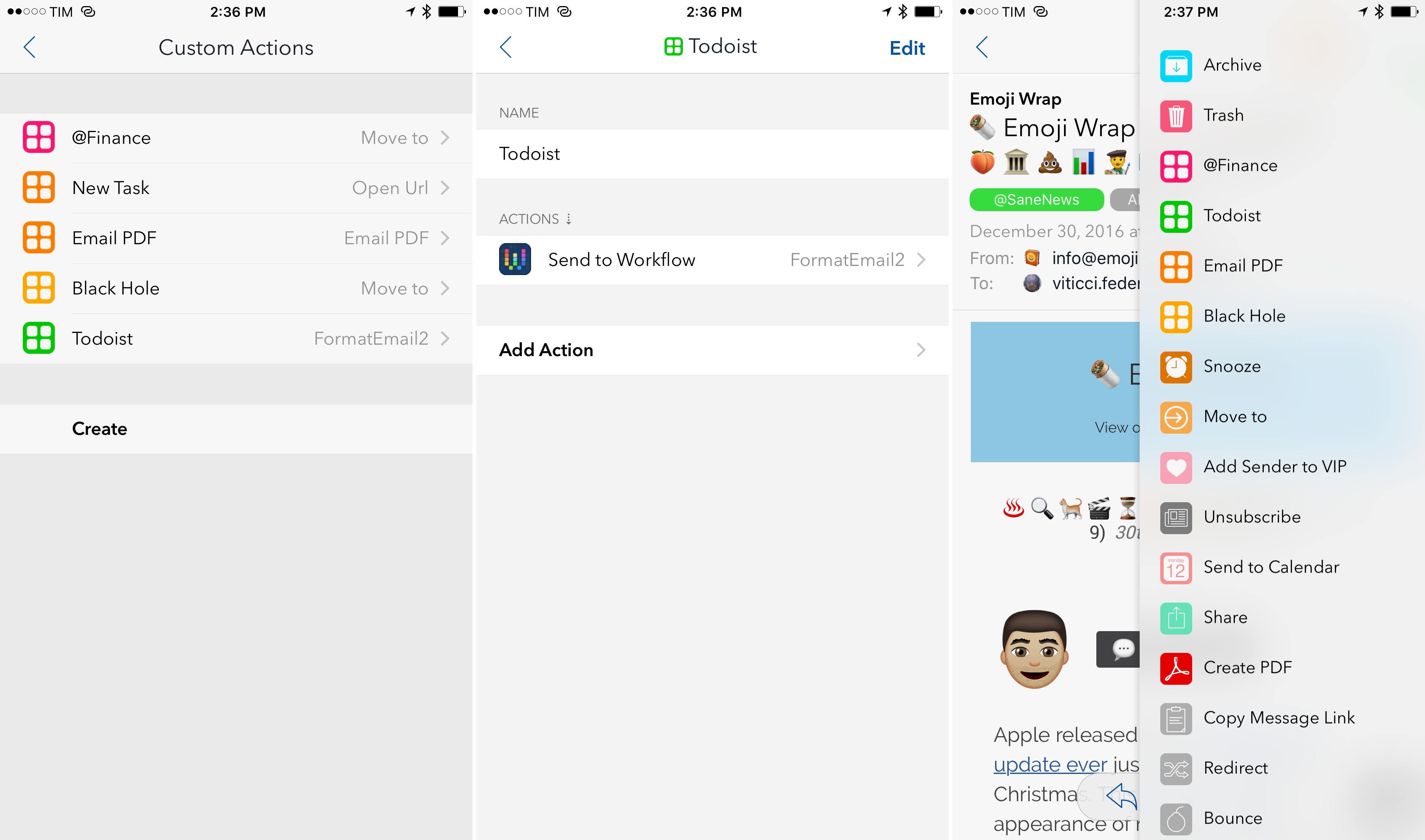 Airmail, the most powerful email client for iOS and my 2016 App of the Year, has made integrations with third-party apps and services the central element of its experience, allowing users to deeply fine-tune their email workflows. With version 1.5, launching today on the App Store, the developers at Bloop are further expanding Airmail’s integration roster with the ability to create custom actions as well as Workflow support to craft automations tailored for messages shared from Airmail.

I’ve been playing around with custom actions in Airmail for the past month, and, even if what I came up with isn’t dramatically advanced, I think this feature will be useful to anyone who’s ever needed custom processing flows when sorting and acting on email messages.

A custom action in Airmail is a combination of multiple actions in a single command. The majority of Airmail’s existing actions – including the third-party app ones – can be mixed and matched within a simple UI that executes every step for the selected message. 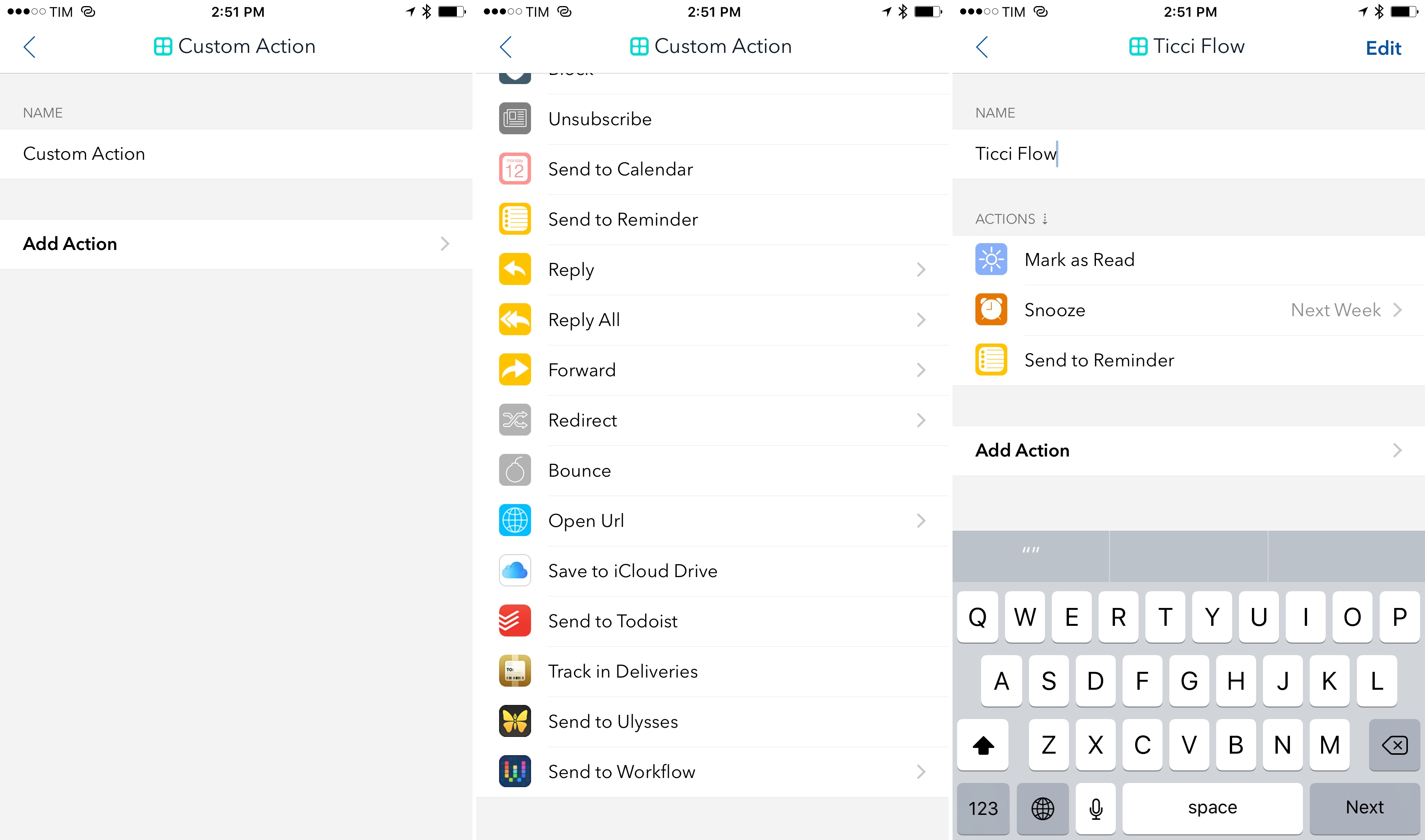 The custom action UI in Airmail 1.5.

For example, you can create a custom action that marks a message as read, snoozes it until next week, and creates a reminder for it with one tap; or, you can put together an action that saves the sender of a message as VIP and creates a Trello card with the details of the email you want to remember. Whether they’re built-in app features (such as snoozing or applying labels) or third-party app/service actions, you’ll be able to combine them with custom actions to save time if you find yourself manually performing the same operations in a row on a regular basis.

Airmail’s custom actions don’t sport any kind of basic control flow and variable support; they’re a way to bundle multiple actions in a custom shortcut, not a miniaturized programming environment inside Airmail. Their simplicity, however, doesn’t diminish their effectiveness; because they’re extremely easy to assemble, custom actions have the potential to benefit everyone.

I’ve mostly relied on custom actions to file messages into specific folders more quickly, which is especially convenient given the ability to assign a custom action to a swipe gesture in the inbox. This way, I can triage messages for my SaneBox workflow with a combination of swipes and custom actions – an option I can’t have in other email apps for iOS. I would like to see all native Airmail actions to be supported in the custom action setup UI (some of the actions you can configure in the app’s settings are not available as custom actions), and there should be a more flexible configuration for some of them1, but, overall, I believe the ability to let users create their own action bundles is another strong addition to Airmail.

There’s one aspect of custom actions that opens up exciting new possibilities for automation – a Workflow action to send specific message data as input from Airmail to a workflow.

Upon creating a custom action (and if you have Workflow installed), scroll to the bottom of the list of supported actions, and you’ll find one called ‘Send to Workflow’. 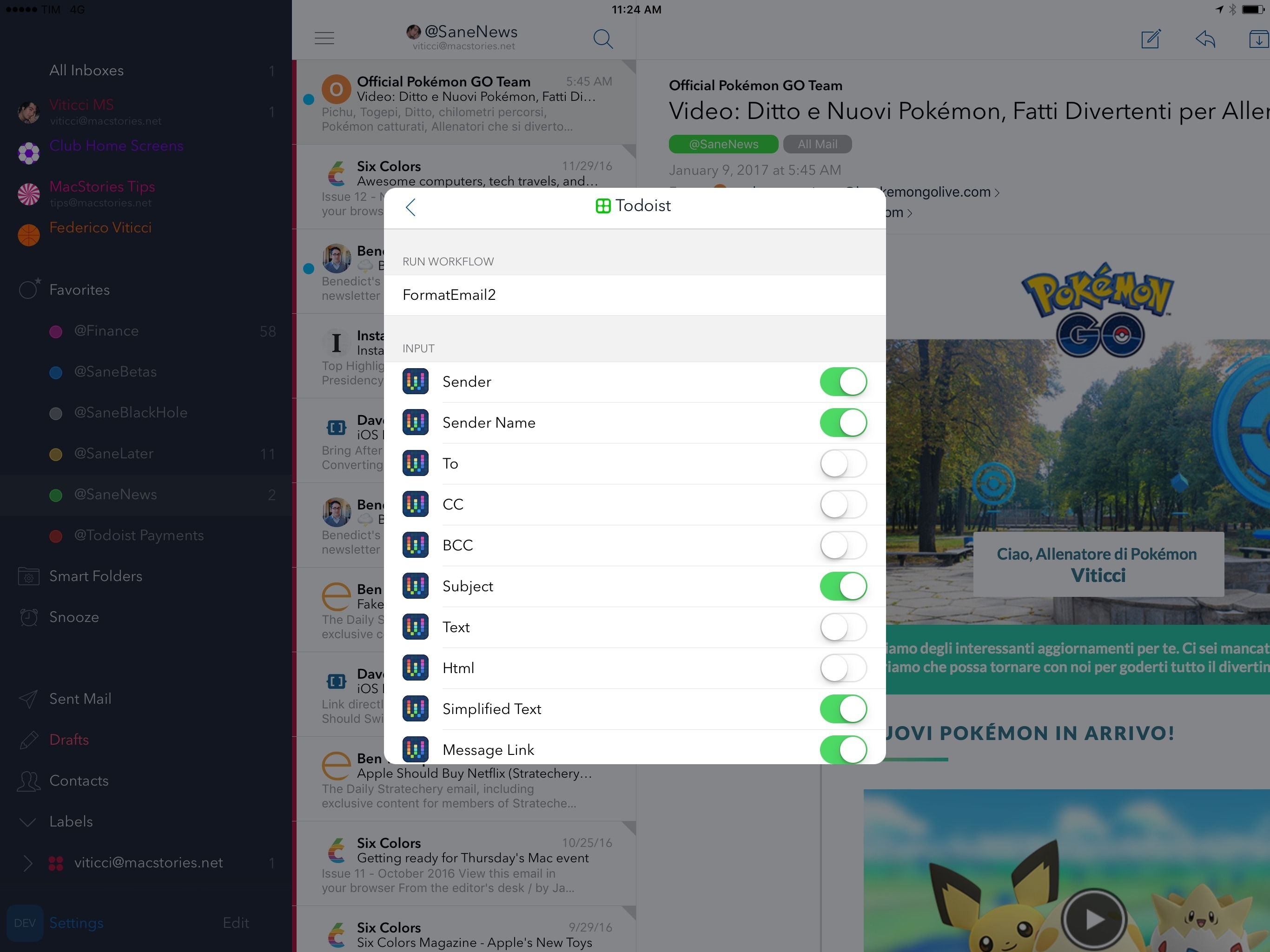 This action contains a list of toggles for different properties of a message that you can send as input to a workflow. Message properties include:

In addition, you can define a custom separator for each value Airmail will send to Workflow (useful to later split text into multiple bits), and you can set an action to be performed after invoking a workflow, such as creating a new email message or sending a reply.

Thanks to this Workflow integration, you’ll be able to create custom actions that trigger workflows to parse email messages either as text or PDFs, extracting metadata (like sender information and email addresses) to do something with them by leveraging Workflow’s hundreds of actions and web API support. For advanced users, this is a solid solution to the problem of automating email data from Airmail with an easy step that doesn’t involve the system clipboard, and it’s poised to unlock deep automation possibilities not available in other email clients.

In a custom Workflow action that I will share later this week with Club MacStories members, for instance, I created my own ‘Add to Todoist’ action in Airmail by sending bits of a message to Workflow and using its regex tools and Todoist support to convert an email message into a rich task.

I expect to hear from readers and Airmail users about innovative ways to automate messages and save them into others apps thanks to custom actions and Workflow.

Finally, these automation features in custom actions aren’t exclusive to Workflow: the same message parameters that can be sent to Workflow are available as URL scheme tags in the new ‘Open URL’ action. As the name implies, this will allow those who know the URL scheme of an app not natively supported by Airmail to create actions that send message data to it.

Details for the URL scheme are documented in the Open URL action itself; even though I haven’t found a need for custom URL scheme actions myself, it’s a nice to have the option.

In its first update of 2017, Airmail once again focuses on user customization and going beyond the tools traditionally offered by email apps on iOS. Anyone who needs to process dozens of email messages and work across multiple apps every day should consider Airmail – there’s nothing else like it, and now you can even create your own actions and workflows around it. I’m excited about what’s in store for Airmail this year.

Airmail 1.5 is available on the App Store.