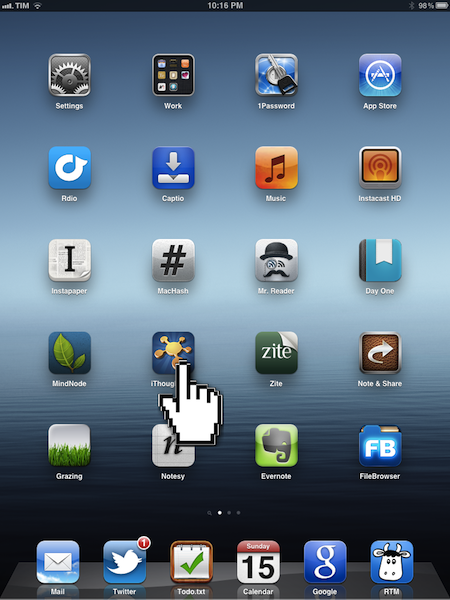 Gabe Weatherhead has an interesting take on my iOS-ification of Apple’s Ecosystem piece:

But there is one feature missing from iOS that will prevent it from ever being effective with an external display: a cursor. I know this seems blasphemous but if you have ever tried to us an iPad with mirroring, you know that you must still look at the iPad to get anything done.

To use the iPad as a desktop replacement, mirroring is not enough. I need a cursor displayed where my finger touches the iPad (or iPhone) so that I have context on the external display. Every time I see iOS app demo videos they are accompanied by cursor representations for the touch interactions, and I think “that would be a great feature on the AppleTV.

I have used AirPlay Mirroring with my iPad 2, and I agree that it’s weird to be forced to look down at your iPad’s display if you want to get anything done that’s not sliding presentations and photos. Even games, in spite of their less complex on-screen controls and interfaces than, say, an app like OmniFocus, can be hard to be played without looking down sometimes.

What I’d like to see – and something that likely won’t happen anytime soon – is a series of “desktop accessories” to better take advantage of the iPad when mirrored or connected to an external display. For instance, imagine some sort of Magic Trackpad for iOS that would allow you to retain gestures and multitouch, but have a cursor when the iPad is mirrored to an Apple TV. Something I often hear (and find myself into as well) is that some apps are just better with a cursor in the current state of software offerings – for example, image editing and highlighting text. Imagine if Apple built an official accessory that, through APIs (much like iCade does), allowed developers to enhance their apps with direct support for “cursor mode” when the iPad’s screen is mirrored or even when the device is held by a stand (magnetic latches could inform the system of the current orientation of the device). If I had to put my two cents in it, I’d say this could be a way to market the iPad as a device capable of switching to a more precision control-oriented environment if needed. Video professionals woud sure welcome such a move.

I’m not saying Apple should produce a convertible tablet that switches between iOS and OS X (albeit Apple’s direction seems to be making switching between the two a seamless experience) – I’m arguing that some specific software and functions are better with a cursor in the current state of things. So unless we’ll see revolutionary new touch controls that will obviate the need for such idea, I think cursor controls on an app-by-app basis is something worth considering for the future of iOS’ mirroring and external display connections.

Perhaps Apple is fully committed to multi-touch and we’ll never see new cursor-based interfaces/hardware coming out of Cupertino again. But I think cursor-based controls are still superior for some kind of apps, especially for professional software such as video and image editing. 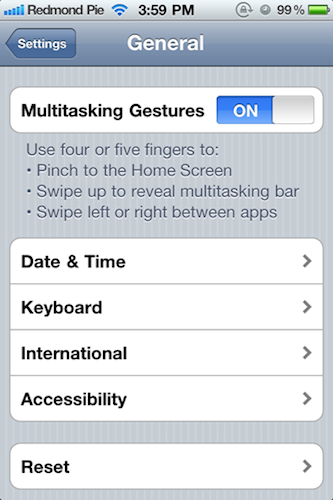 With iOS 4.3, Apple introduced the possibility for developers to activate “multitasking gestures”, a set of multitouch-based four and five-finger gestures that allow you to quickly switch between apps, go back to the homescreen, or invoke the multitasking tray. The gestures didn’t make it into the public version of iOS 4.3 (they were meant for dev test-only since the beginning), but they still can be enabled with a copy of Xcode, also sold in the Mac App Store at $4.99. Personally, I love multitasking gestures on my iPad and I use them all the time. Gestures are the future, and on the iPad they help me do things faster, in a much more intuitive process.

A new Cydia tweak called MT Gestures allows iPhone 4 and iPod touch 4g owners to turn on the multitasking gestures – with the same preference panel seen on the iPad. These settings have been there all the time, but they need to be manually enabled with an hack. This is exactly what MT Gestures does, for free. It’s available in ModMyi’s repository.

We don’t think, however, multitasking gestures are that great on the iPhone. If you want to be reminded why, check out the video below. [via Redmond Pie] END_OF_DOCUMENT_TOKEN_TO_BE_REPLACED 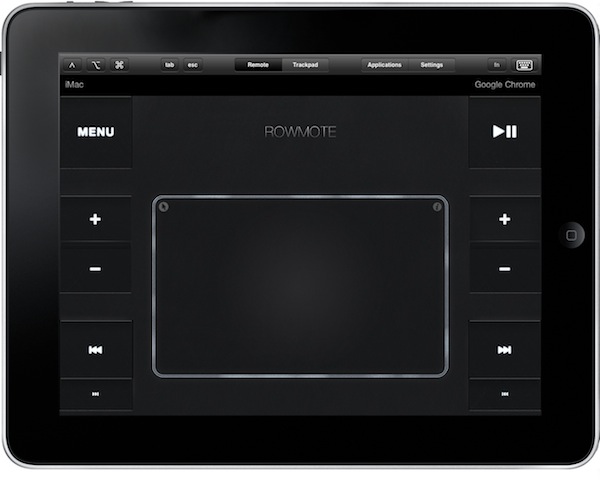 This app has been around for months, yet I’ve come to use it only a few weeks ago when several readers pointed out on Twitter that it was a better alternative to Remote Conductor. Rowmote Pro, which is a universal app for iPhone and iPad that requires a server component to be running on your Mac, is an elegant multitouch trackpad that comes with other functionalities such as quick volume / pause / next shortcuts, an app launcher and a virtual keyboard. Rowmote Pro won’t display the screen of your Mac computer on your iPhones and iPads, but it provides access to a plethora of commands that can come quite in handy if you’re controlling your Mac from the couch, watching a movie or listening to some music. END_OF_DOCUMENT_TOKEN_TO_BE_REPLACED

A few weeks ago, I published an article about the idea of “smart bezels” in iOS devices to avoid conflicts with third-party applications using multitouch gestures. With Apple playing around with the concept of “multitasking gestures” in the latest iOS 4.3 betas, it has become an issue for developers to find a way to enable 3,4 or 5 finger gestures without interfering with Apple’s own implementation:

The problem with the new gestures is that Apple decided to make them system-wide, activated with a preference panel in the Settings app. Once gestures are enabled, they override any other four or five finger gesture developers may have implemented in applications. Personally, in fact, I have experienced issues trying to use multi-touch gestures in Edovia’s Screens or other piano apps — software that makes extensive use of gestures above two and three fingers. Apple’s implementation overrides options set by developers, and there is no way to let the iPad know whether a user wants to perform an app-specific gesture or a system one, like “open the multitasking tray”.

END_OF_DOCUMENT_TOKEN_TO_BE_REPLACED 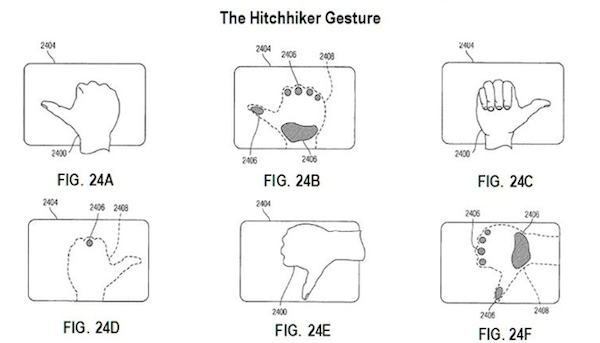 It’s no secret Apple is looking for ways to better integrate multi-touch gestures into iOS devices and the Mac platform: the latest iOS 4.3 beta allows developers to set up “multitasking gestures” (which won’t ship with the final version of 4.3) and OS X Lion will make extensive use of gestures as well through the Launchpad and full-screen apps. Clearly, and we all know this, Apple is shifting user interaction with a computing device from pointing to touching.

That said, the latest gesturing patent Apple has been awarded left us kind of surprised initially. As reported by Patently Apple, Apple has patented as series of “real world and security” gestures for touch and hover-sensitive devices. While we’d leave the hover-sensitive design to geek dreams for the next decade (imagine interacting with a device without even touching it, like this), the new gestures surfaced in the patent are surely original. Among them, a “hitchhiker” gesture for scrolling, panning, windowing and general directional input. END_OF_DOCUMENT_TOKEN_TO_BE_REPLACED 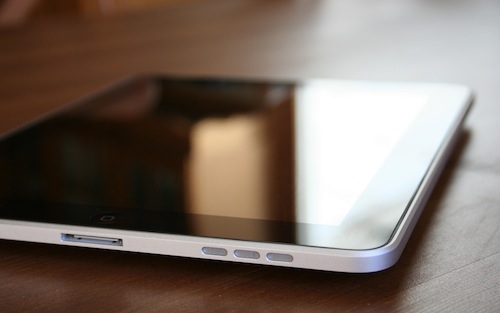 In the first beta of iOS 4.3, Apple introduced “multitasking gestures” for iPad: offered as a preview for developers to play with and test compatibility with apps, these 4 and 5-finger multitouch gestures allow users to execute a series of actions otherwise assigned to the Home button. You can switch back and forth between apps, open and close the multitasking tray or pinch back to the homescreens. The gestures need to be activated through Xcode as, again, they are a developer preview of a feature that won’t even be enabled in the public release of iOS 4.3, as Apple let devs know last night.

The presence of gestures that offer some functionalities previously exclusive to the Home button also let the rumor mill run wild, with some bloggers speculating that Apple may get rid of the Home button in the next iterations of the iPad and iPhone. Personally, I think gestures on the iPhone’s tiny screen are a terrible idea – and it gets worse if you have non-average, big hands.

Gestures are a neat new feature for the iPad that provide a glimpse at something Apple is clearly working on: more multi-touch capabilities for iOS devices. These very same gestures, though, gave several developers a hard time trying to figure out how to integrate them with their apps. END_OF_DOCUMENT_TOKEN_TO_BE_REPLACED

Rumor has it Apple may be willing to implement the multitasking gestures already seen in the iOS 4.3 beta for iPad on the iPhone as well. Those willing to believe that gestures will take over buttons on our mobile devices someday even claim that Apple may get rid of the Home button altogether on the next iPhone and iPad.

Four and five-finger gestures on the iPhone’s screen, however,  have always sounded like a terrible idea to us. And now there’s video proof that, indeed, the iPhone isn’t meant for all those fingers.

It goes like this: a Youtube user enables multitasking gestures on the iPhone (weren’t they supposed to only being tested internally?) and records a video of the multi-touch galore in action. The result is embedded below. And, quite frankly, we do believe the Home button is here to stay.

Installed iOS 4.3 Beta 1 on your iPad, but can’t find the multi-touch gestures option everyone on the Internet is talking about? It’s not an “error” in your device, you just need to take an extra step to activate the feature. END_OF_DOCUMENT_TOKEN_TO_BE_REPLACED 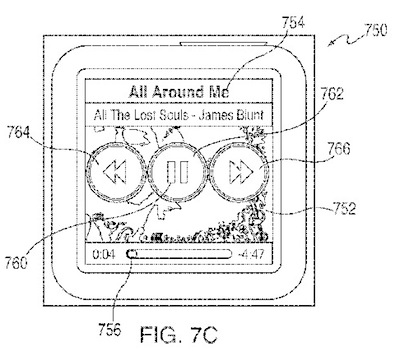 Multi-touch gestures are great. With natural gestures like pinch, swipe and tap you can flick through your photos, scroll webpages, point items. The obvious downside is that, in order to confirm a gesture has worked properly, you need to look at the screen. And when the screen is not a MacBook’s one but an iPod touch and you’re running for your daily workout session, you can guess looking at the screen can become quite a task. That’s why Apple put buttons back in the Nano, for instance, but the engineers at Cupertino think it’s not enough.

Apple has, in fact, patented a way to perform certain multi-touch gestures and have actions happen on screen without actually looking at it. According to the patent, people could perform gestures similar to the commands on Apple’s own earbuds, or adjust the playback volume with a circular gesture similar to the classic iPod’s click-wheel. Other “special gestures” are mentioned in the patent.

The device used in the patent filing is a sixth generation iPod Nano, something that would suggest Apple is looking forward to a firmware update to enable more features, and gestures, in the device. Or maybe, the Nano being depicted in the patent is simply used to illustrate how Apple may implement “lookaway” gestures in future mobile devices.