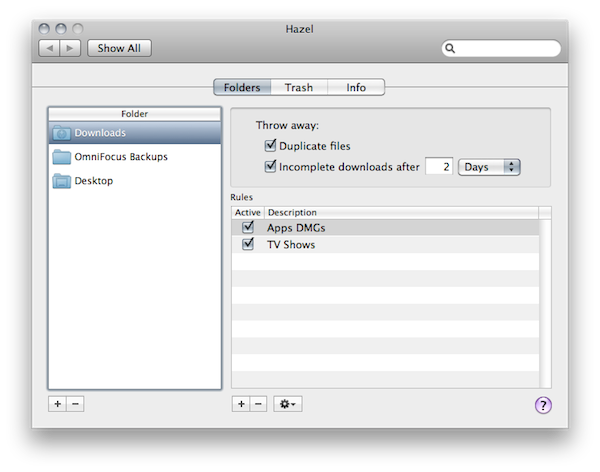 Over the weekend, I have started using an application several MacStories readers and friends of mine suggested for a very long time: Hazel. Following Ben Brooks’ excellent roundup of what can be accomplished with Noodlesoft’s Hazel and a series of great tips I’ve found on the Internet, I decided it was about time to take what many call “the most precious time-saving utility for the Mac” for a spin. The results, even in a short 3-day testing timeframe, are quite impressive.

This is not meant to be a review of Hazel, as I believe the app can go really in-depth with its feature set and I need a few more weeks before writing a proper article. Still, I think I should share my thoughts on why I started using it, especially considering how it’s difficult to find on blogs the reasons why you need Hazel, rather than a list of all the things this utility can do. Last week, when I was not a “Hazel user”, I couldn’t find a single post about getting started with Hazel, and why you should give it a try. So here it is.

Put simply, I want to achieve the utopian state of a self-cleaning, self-organizing Mac. The problem: I take a lot of screenshots every day, download lots of documents and install many different apps and, most of the times, I forget to clean everything up. The desktop becomes cluttered with all those .png files; my Downloads folder is imploding with .DMGs and .pdf files and I don’t remember to empty the Trash. In fact, until a few days ago my MacBook wasn’t minimal or uncluttered at all. So I decided to start over: I re-installed OS X (this was needed due to some kernel panics I experienced last week), quickly imported all the files and apps I needed (Dropbox and the Mac App Store are great for this) and installed Hazel. There’s a free trial available (14 days) or you can buy the app for $21.95. My Mac is now running a clean install and it’s controlled every single minute in the background by Hazel.

The thing to understand about Hazel is that it’s like a smart folder…for folders. Just like with OS X smart folders you can assign criteria and resulting actions (if this, then that), but unlike smart folders Hazel isn’t meant to visualize content or perform specific searches. Rather, it’s an app that monitors folders and performs any action based on the criteria you assigned. If this happens, Hazel, do that. Very simple, but incredibly effective.

An example is the first rule I created to get rid of apps’ dmg files after a certain amount of time. I told Hazel: in the Downloads folder, if a file’s extension contains “dmg”, it’s less than 200 MB in size and I haven’t touched it in the last 4 hours, then move the file to the Trash. Why less than 200 MB? Because that’s the average size of most apps is below 200 MB and I don’t want to accidentally delete .dmg firmwares coming from Apple. Another rule I set up involves the deletion of screenshots I take with my Mac and end up on the Desktop: if there is a file with “Screen shot” in its name and it’s older than 6 hours, delete it. Again, Hazel is the finest implementation of “if this, then that”. Assign a rule, let Hazel do its job and forget about it. This fits my workflow and helps me saving time, something I hadn’t really considered in the past but that’s turning out to be a must-have now.

What I like about Hazel, and also what most people don’t mention, is that it’s not difficult to set up. Seriously, most tutorials will give you a headache or make you feel stupid because you don’t understand how this magical thing works. Actually, creating rules is very easy (Hazel sits in System Preferences as a prefpane, the interface is tabbed and lets you switch between “Folders” and “Trash”, see screenshots) and involves choosing a destination folder and rules from a dropdown menu. Sure, you can enter advanced mode and create the most complicated rules you could ever think of – but Hazel is still very user-friendly out of the box. Don’t let the fact that Hazel is a powerful app fool you to think it’s only for “advanced users”. In fact, anyone can install it and get going with a first set of rules provided by default. Once you’re familiar with the app and the rules you can assign, indeed it will become a powerful tool for complex tasks – like automatic .avi conversion to .mp4 through an Automator workflow that also moves the converted file to iTunes and an external drive at the same time. Stuff like that is possible, and you’d be surprised to know it’s not even hard to set up as it sounds. So far, I’m deeply pleased by the “start easy, go super-nerd-yet-simple” configuration offered by Hazel.

Last, I want to mention the “app sweep” feature. Besides creating and running rules against your folders, Hazel can help you uninstalling Mac apps along the way. It’s not a secret that Mac apps come with additional folders and files scattered all around your hard drive, and that when you uninstall an app by dragging it to the Trash those files will stay there, eating space. Hazel can get rid of those as well as you delete an app. It will display a popup alert saying something like “hey, I’ve found this additional stuff, would you like to get rid of it?” which, in my opinion, is just perfect and requires a click to be activated.

I know I’ve only scratched the surface of Hazel so far, but I believe this is exactly what I’m liking about this app: it allows you to do anything you want, yet it doesn’t overwhelm you with features and menus. Hazel is not “for geeks”, it’s a utility for every Mac user that wants to spend less time organizing files or folders on a computer. It’s an automation system for your Mac that will cost you 20 bucks and it’s fast, reliable and unobtrusive. I’ll have more about my Hazel setup in the next weeks, but right now I have to thank everyone who recommended this app. You should give it a try.