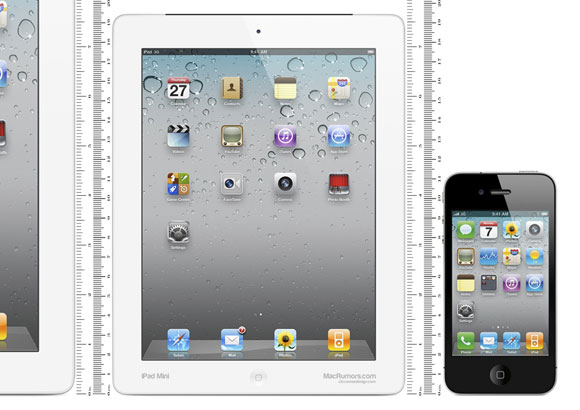 In the latest episode of his weekly podcast with Dan Benjamin, The Talk Show, Daring Fireball’s John Gruber suggested he has heard from “numerous” sources within Apple about a 7.85-inch iPad being tested in the company’s labs.

Well, I don’t know. What I do know is that they have one in the lab…a 7.85 inch iPad that runs at 1024×768… it’s just like the 9.7” iPad shrunk down a little bit. Apps wouldn’t need to be recompiled or redesigned to work optimally on it. It’s just the iPad smaller.

First off, I haven’t listened to the show yet, as I’d like to reflect upon some ideas I’ve been saving for the past months when rumors about this “smaller iPad” kept coming out. As for why 7.85 inches would be the ideal size for a smaller iPad, AppAdvice’s A.T Faust had a good explanation a few weeks back.

When it comes to this fabled smaller iPad, I don’t think the question we should be asking is “really?”. Of course Apple has a smaller iPad in their labs. Of course it has a 4:3 ratio to maintain existing resolution schemes. I’m more doubtful about the rumors of partners in China mass-producing these units, but I’m sure there are all kinds of neat product prototypes at Cupertino. For the same reason, do you think Apple hasn’t tested all the possible combinations of iPhone form factors? Bigger MacBook Airs? Different Apple TV designs? Do you really believe the world’s most valuable company…no, any sufficiently successful tech company gets an electronic device “just right” on their first try? Of course there are prototypes and iterations. And that a smaller iPad is one of them should be no surprise.

The question that we should be asking is: why would Apple want to release a smaller iPad? Now that’s an interesting discussion, as there are a number of factors worth considering in regards to expanding the iPad line to smaller versions.

Let’s start with the simple one: Apple won’t release a smaller iPad to “respond” to Samsung and the likes. Please note the difference between “consider” and “release” here. Because even if we agree that the rumor of prototypes in the labs is no surprise, then we’d argue on a reason for releasing such product, and I think competition is not a valid one. Apple won’t release a smaller iPad because it feels threatened. Apple is an engineering company at heart, they look at the data, and data suggests there is no need to feel threatened. Sure, Amazon’s Kindle Fire is rumored to be fairly successful, but I bet it’s not that profitable for the company. Amazon didn’t build it with iPad-quality components. So if people would like a first-class smaller iPad, this brings me to the next point: hardware.

There are two popular assumptions going on these days: that a smaller iPad would be perfect for portable eBook reading, and that it would have the resolution of older iPads – 1024x768 pixels. Here’s my problem with this discussion: I don’t see Apple as the company going backwards in terms of specs. I don’t see them coming out with an iPad that’s new and smaller, more portable and lightweight, but carrying the resolution of last year’s iPad. The Retina display isn’t just a display for Apple, it’s a standard that sets the bar higher. Why did the iPod touch gain a Retina display (even if not of the same quality as the iPhone’s)? Because Retina was the new standard in 2010, and Apple had to bring it over to the other 3.5-inch device, the iPod touch. The way I see it, the same reasoning applies, both in terms of philosophy and product concept, to the iPad: the third generation’s iPad Retina display has set the bar higher and I don’t see Apple coming out with a new iPad that shows its pixels once again. With a 7.85-inch screen and the same resolution of older gen iPads, 163ppi wouldn’t look nearly as good as the new iPad’s 264ppi (the original iPad had 132ppi). Apple is a company that iterates, slowly, but inexorably, and the Retina revolution is now indeed impossible to prevent.

So let’s assume Apple does have a smaller iPad with a Retina display. That would make for incredible image quality at 326ppi, but it would create a series of new problems from a software perspective. A 7.85-inch iPad with a 2048x1536 “Retina” display, in fact, would come at 326 ppi – the same as Retina iPhones and iPods. Whilst that would play well in terms of keeping the math unified across the board, it could pose a question for developers. Even without having to update graphics for the new resolution (and maintaining the same size of tap targets), a physically smaller device will inevitably make the user interface run on a more physically constrained display, and what makes sense on a 10-inch display doesn’t necessarily work just as fine on a 7.85-inch one. Apps will run with their existing designs, but there’s the possibility some developers would still want to optimize some graphical elements for the new size.

And then, of course, there is the hardware side of this debate. If Apple had to put a bigger battery (1mm thicker) in the new iPad to compensate for the resources required by more processing power and the Retina display, what makes us think that consumer technology is “already there” to power a Retina display on an even smaller iPad? Batteries small enough and capable of powering a Retina display may already exist, but I assume they wouldn’t be ready for mass production on a large scale. More importantly, if they don’t exist yet, it wouldn’t be a surprise either, as Apple had to make its existing battery bigger (something they don’t usually do) to power its new iPad. For as much as miniaturization is one of Apple’s big focuses, I don’t think we have the right technology to make such a device usable for a long period of time (keep in mind it would supposedly be used a lot for reading). The smaller a device gets, the harder it becomes to balance factors like battery life, temperature, and thickness, and that explains why Apple had to wait until the fourth iteration of the iPhone to implement a high-resolution display.

Now, considering all the points I have mentioned above, we have a plethora of alternative theories and combinations as to why Apple could still figure out a way to produce a smaller iPad. Of all them, I find this idea by Odi Kosmatos particularly interesting because it plays well with the math described above: Odi makes the case for a smaller iPad (7-inch as opposed to the rumored 7.85-inch model) that carries a 1920x1080 resolution that could allow for 326ppi and Retina iPhone apps running at native size on the device. While I find the numbers fascinating, I believe Apple would never do an “iPad” that doesn’t run iPad apps – that’s just absurd. But a device that “sits” in the middle, like the original iPad did for smartphones and computers? A device in between iPhones and iPads? Now that’s an intriguing theory which goes back to the old eBook-reading device rumor: I don’t think the market is so saturated yet that there’s a real need for a new savior that sits in the middle of existing options, but we’ll see.

The other big theory is that, assuming a smaller iPad with Retina display would be unfeasible in the short term, a 7.85-inch iPad with 1024x768 resolution would still be good enough for portability, gaming, kids, and education. Some notes about these possibilities: let alone the fact that I still have to hear of people not buying iPads because they really hate the 9.7-inch form factor, is the existing iPad really not that portable? You can picture the rumored device by looking at the iPad’s display and imagining a smaller iPad inside it. Is that a considerable difference in terms of portability?

Is there really a market of consumers not buying iPads because they want a smaller iPad, or are the nerds simply excited about the rumors? Let’s get real: what would a 7.85-inch iPad do incommensurably better than a regular iPad to give it a reason to exist? You can immediately tell the difference between an iPod nano and an iPod classic, a 13-inch MacBook Air and the 15-inch MacBook Pro (one of the reasons why I think the 13-inch MacBook Pro is a weird choice). Would the 7.85-inch iPad be a product that can stand out on its own, making the few inches less a reason for potential consumers to choose it?

About the “gaming, kids, and education” theory: when I think of all the possible explanations, this is the one that makes some sense, although I still don’t see it as the reason to release a smaller iPad. Apple is a consumer electronics company, and with their iOS devices they have made sure every possible market segment can benefit from them. From doctors and pilots to writers and teachers, iPhones and iPads can appeal to everyone. Why? Because it’s the software that makes the difference. By releasing a smaller iPad, Apple would put the focus on dedicated hardware, rather than software, for the first time in years. Oh, but you can argue Apple did make an iMac for education. Fair enough, but I’ll argue that the Mac market is nowhere near the size of the iOS market. Is it worth producing and releasing a smaller iPad specifically aimed at certain market segments? Personally, I don’t think so – but I could be wrong. What I am certain of is that the Retina display is inarguably better than old displays in every way, and textbooks and games benefit from it. Would a smaller, non-Retina iPad meant for textbooks and games be as appealing as the bigger iPad with a Retina display running the same apps?

As you can see, I am not saying Apple will never release a smaller iPad, because I don’t know, and because saying “never” when it comes to Apple rumors is always a big bet. My point is, when rumors are getting out of hand, it is always better to shift the conversation away from the “what” and back to the “why” to understand if what we are arguing about does even make sense. And in the case of the 7.85-inch iPad, there are a series of technological issues, software questions, and market debates that leave me skpetical as to whether Apple may release such a product this year.