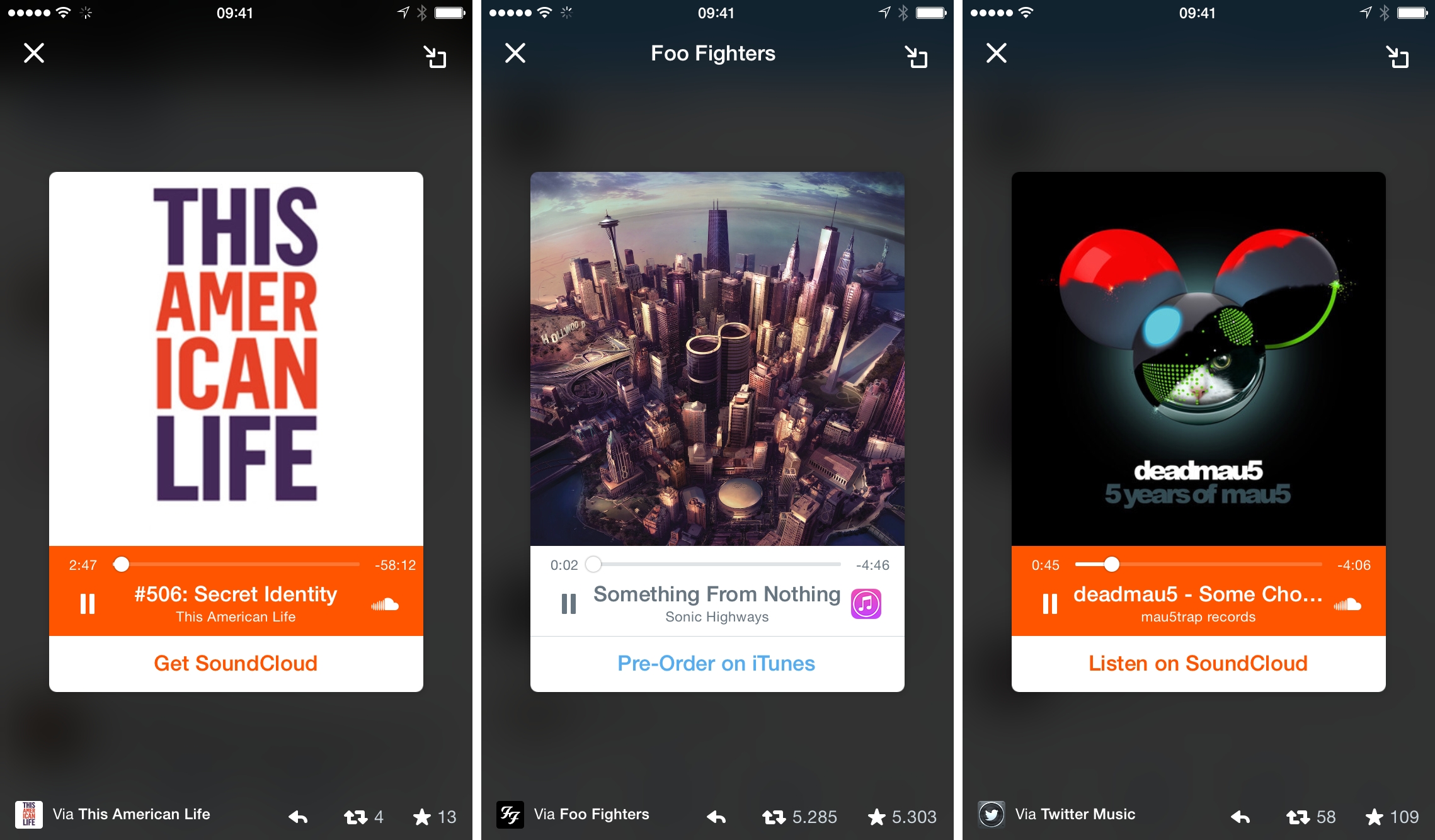 The Audio Card is the latest entry in Twitter’s line-up of interactive cards. The feature was announced earlier this week by Twitter, with SoundCloud being the first partner:

With a single tap, the Twitter Audio Card lets you discover and listen to audio directly in your timeline on both iOS and Android devices. Throughout your listening experience, you can dock the Audio Card and keep listening as you continue to browse inside the Twitter app.

Musicians, podcasters, and other producers of audio content are on board with SoundCloud cards that can be played without leaving the Twitter app. In a separate blog post, Twitter also announced compatibility with iTunes Music:

Now, when you listen to music from select iTunes artists, it’ll only take a few taps to pre-order unreleased music and purchase your favorite songs directly from iTunes.

Foo Fighters are already using the Audio card to promote their new song, Something From Nothing. 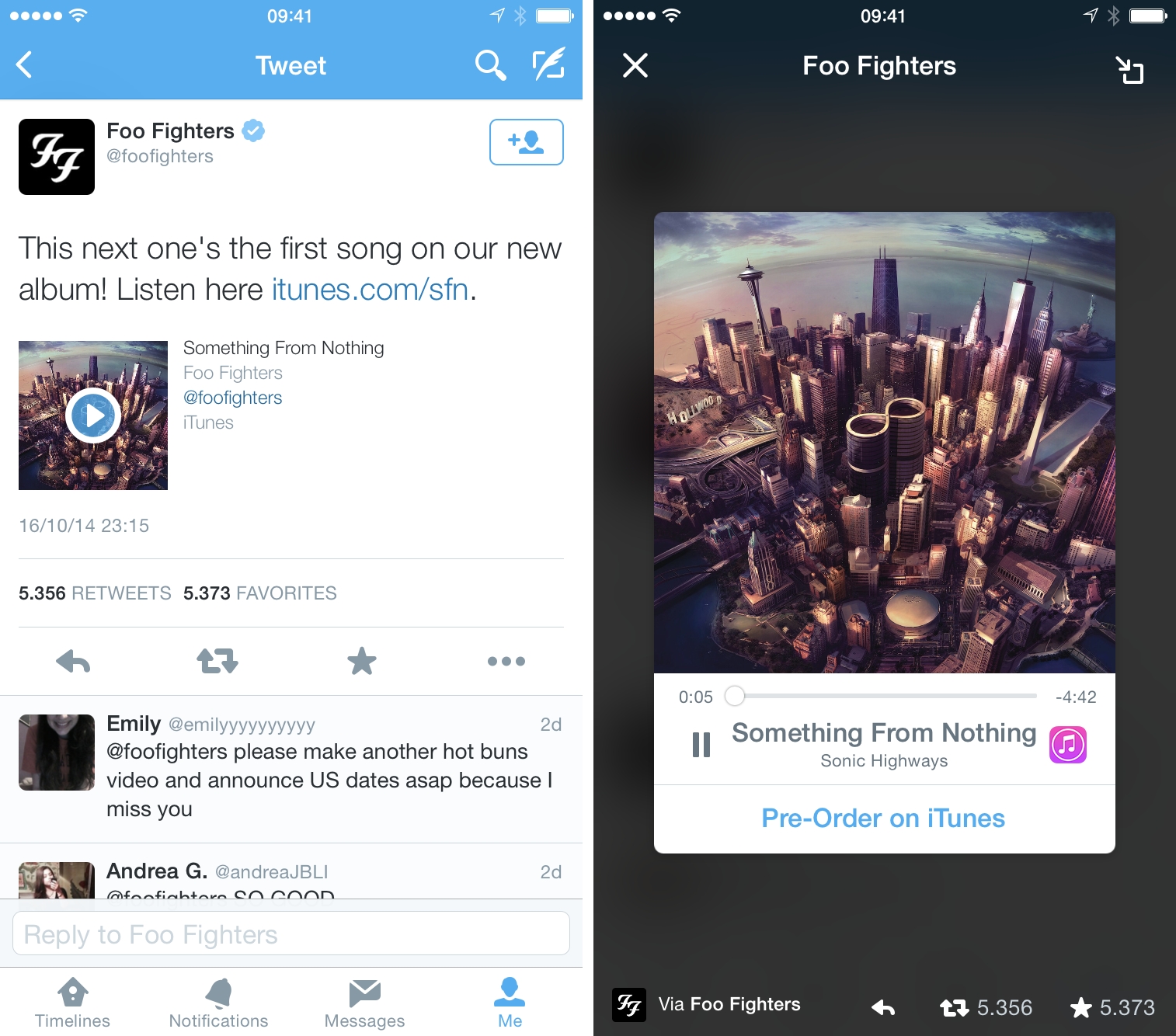 I find the implementation of Audio cards to be elegant and useful. In the timeline, tweets containing an Audio card will show a thumbnail with a Play button; tap it, and the thumbnail will expand to reveal a full card with playback controls and branding/preview for the associated service and content. 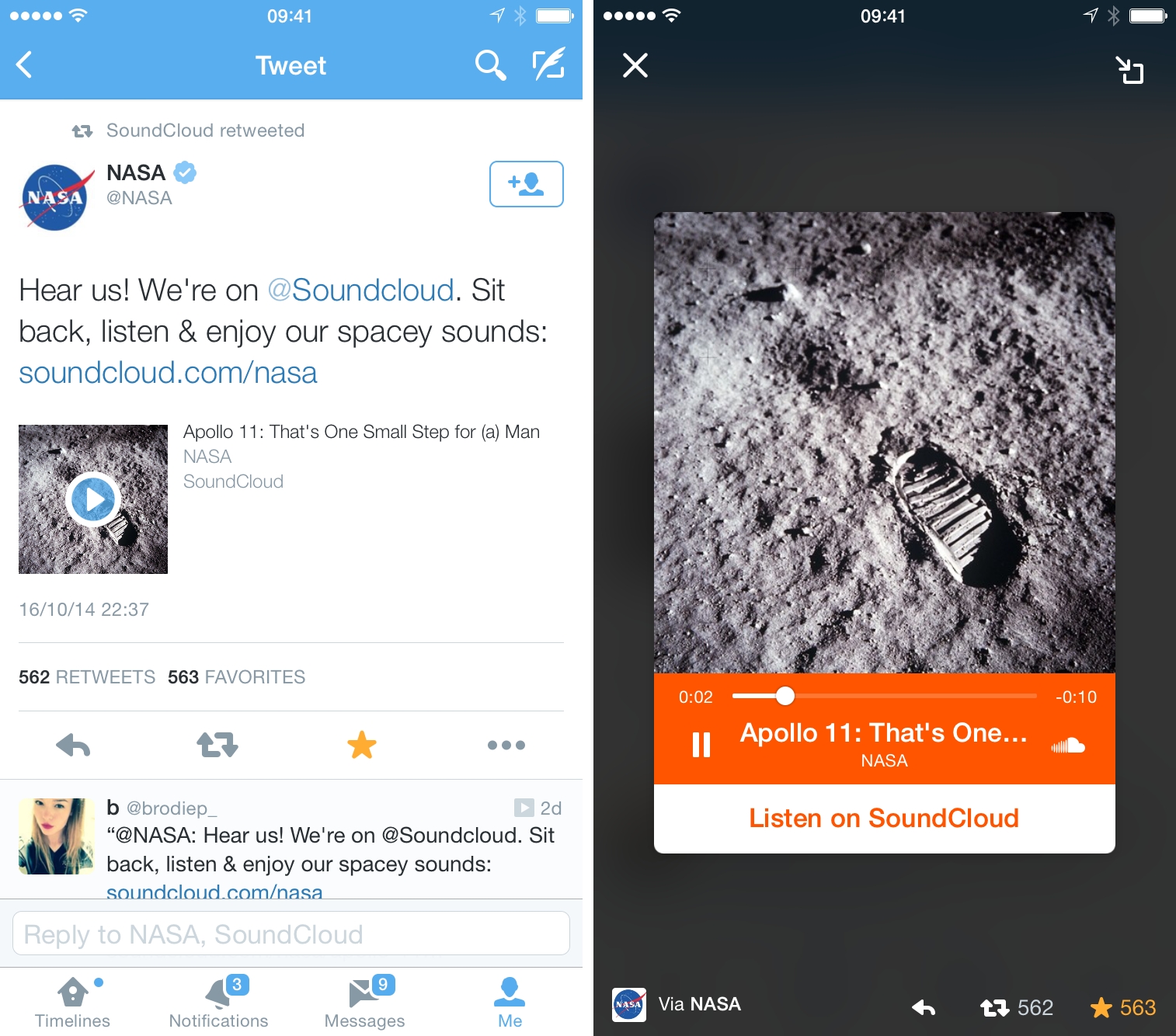 For SoundCloud, you’ll get an orange-themed card; iTunes Music will show a large album artwork and an iTunes icon. Both cards come with a button to perform an action in the relevant app: SoundCloud offers to get the app or open it; Foo Fighters’ card lets you pre-order the song on the iTunes Store. 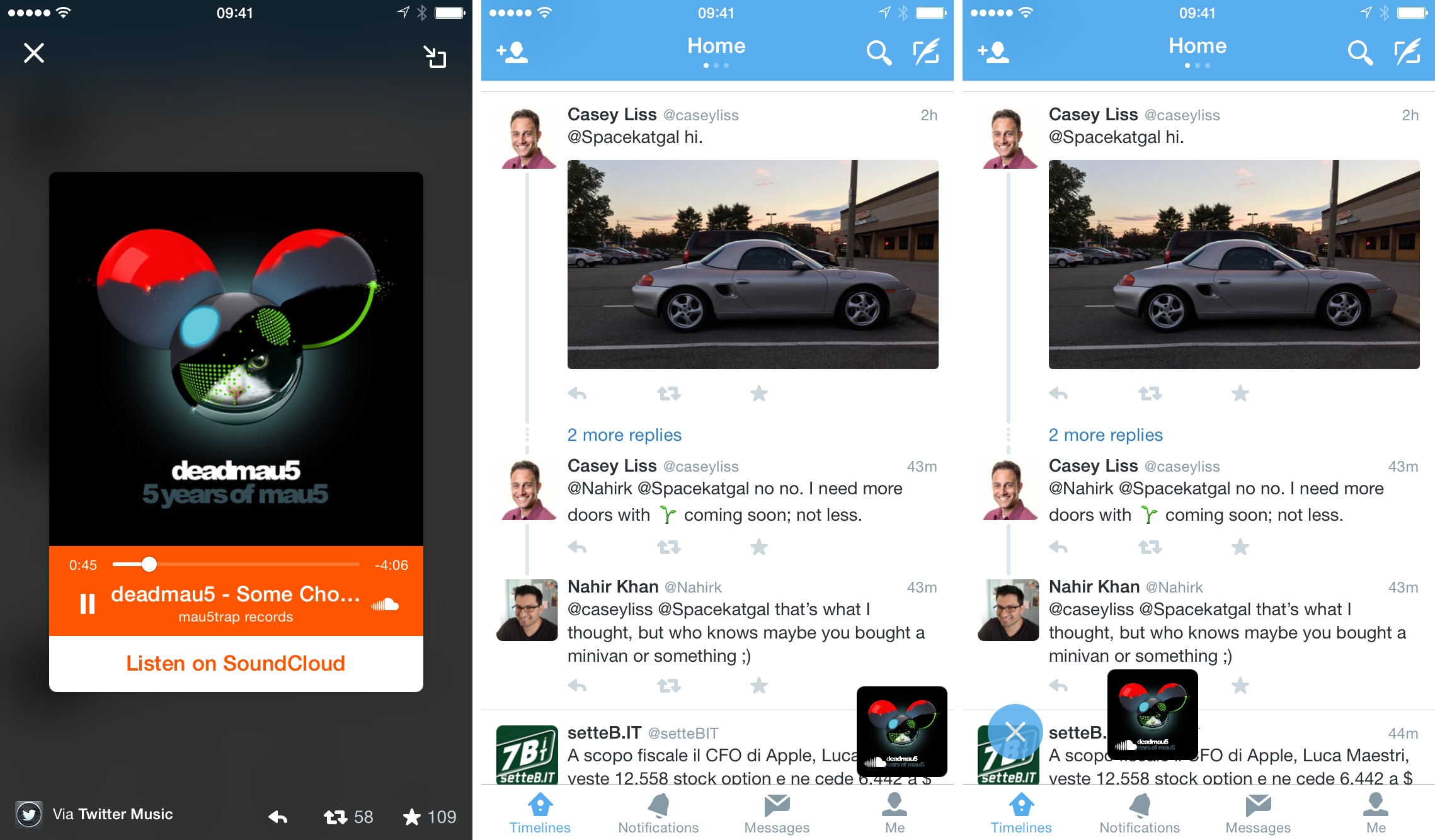 When listening, you can swipe up to close the card/player or swipe down to minimize it and continue to scroll your timeline or navigate the app. You can tap the minimized player to enlarge it, or swipe it to the left towards a close button to dismiss it and stop playback (a behavior reminiscent of Facebook’s chat heads). You can read tweets while listening, but closing the app or opening a link in a web view will also stop playback.

I wouldn’t listen to full podcast episodes in the Twitter app, but I think the Audio card makes a lot of sense for previews of content I may decide to consume in its entirety elsewhere. For instance, I like that NASA shared a short clip of Neil Armstrong’s famous quote or how This American Life teases upcoming episodes through SoundCloud on Twitter.

The same concept applies to iTunes: I like the idea of listening to a song in the background without leaving Twitter or, worse, being limited by iTunes’ 90-second previews. More importantly, I believe this audio/music integration makes much more sense for Twitter’s audience than the company’s original attempt at #music. It may not have the same scope, but making audio a card fits well with the rest of Twitter’s card-ification of content.

Twitter Cards are one of the main reasons I’m still using the Twitter app full-time on my iOS devices. They’re also highly underappreciated or scoffed at by users who’ve grown used to third-party Twitter clients over the years – and that’s too bad, because I genuinely think they’re a great feature. 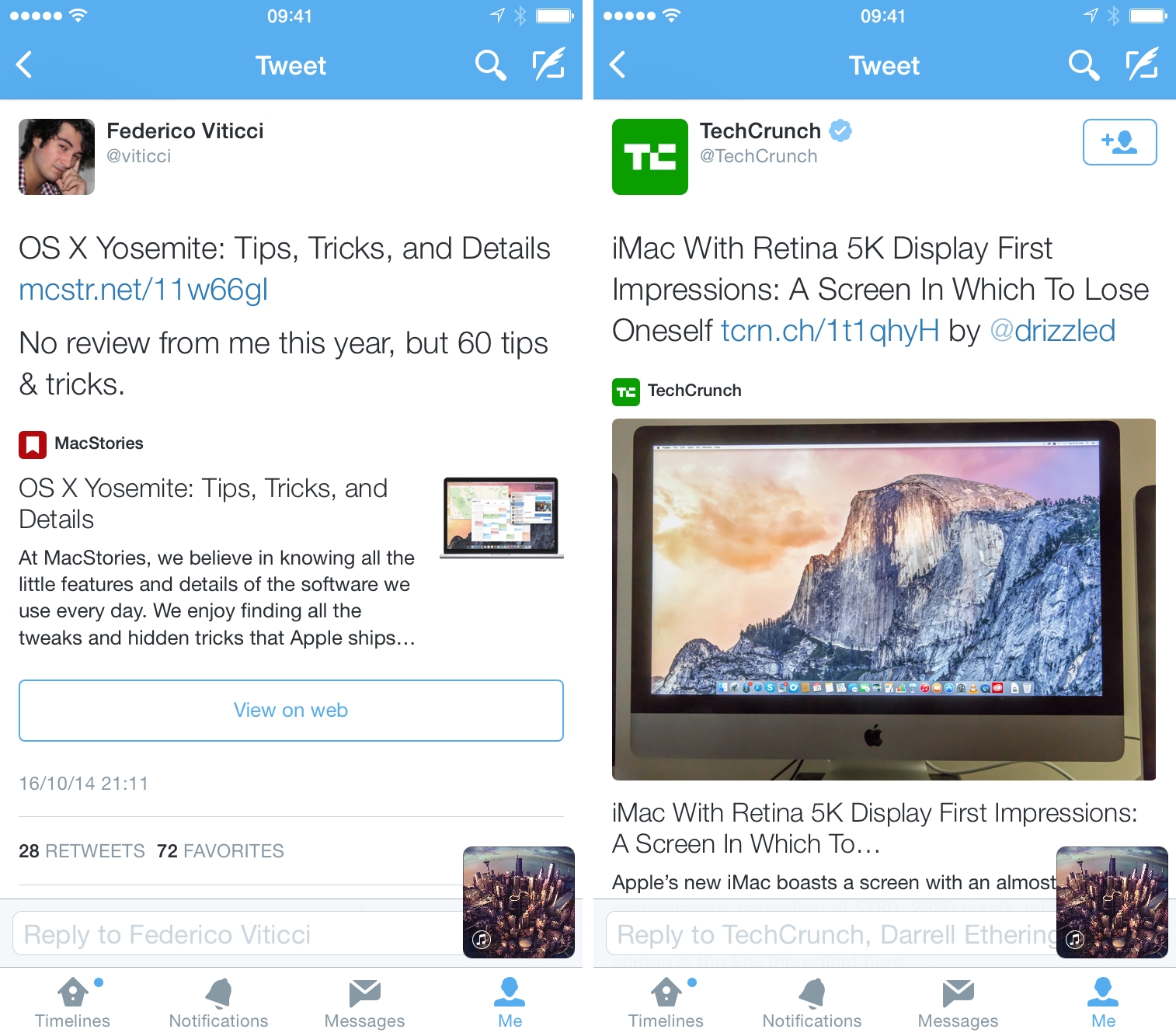 Imagine not having inline previews for photos in your Twitter timeline anymore. That’s how I feel about not seeing Twitter Cards in other clients now.

Besides the obvious photos, galleries, and aforementioned audio cards, there are several types of cards that get expanded or are interactive in the Twitter apps for iOS. In the months I’ve spent using Twitter for iPhone and iPad, I’ve come to expect articles to reveal Summary Cards (we support them with MacStories links) because they often tell me whether a link is worth opening or not just by looking at their preview. I find summary cards for web articles to offer more information and to be more respectful of my time (and cellular data). 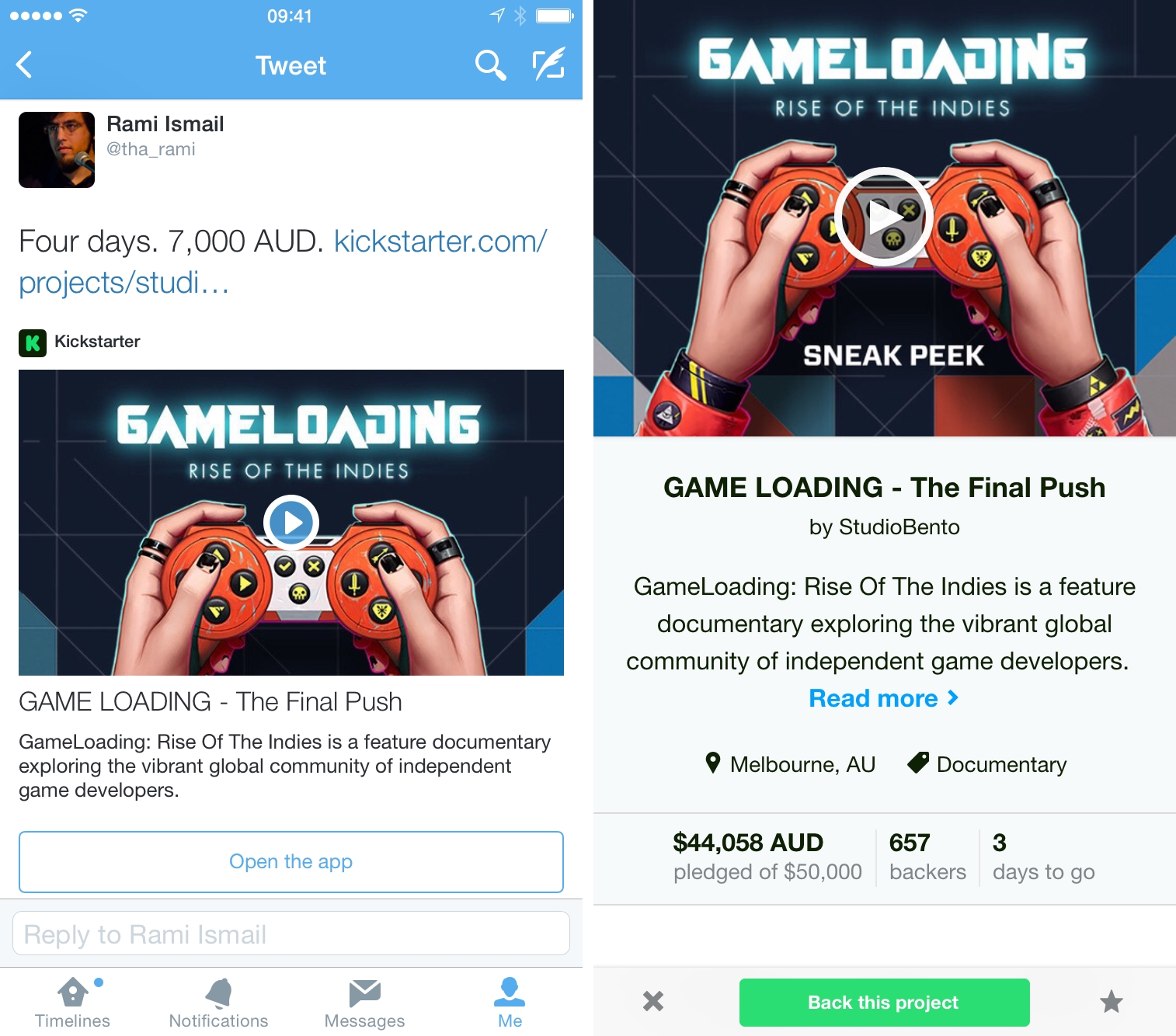 There are more advanced types of cards, too. App Cards, for instance, let you open a specific piece of content – say, a photo – in the relevant app through deep-linking. My favorite use case for App Cards are Kickstarter links: they’re popular among the people I follow (usually for tech hardware or videogame-related campaigns) and they open directly in the Kickstarter app thanks to cards.

The best results we’ve seen with Twitter Cards for MacStories, however, were from the Lead Generation Card. Under this obscure name hides a feature that lets you create Twitter cards with the interactivity of signup forms to let your customers/users sign up for a particular service or product. 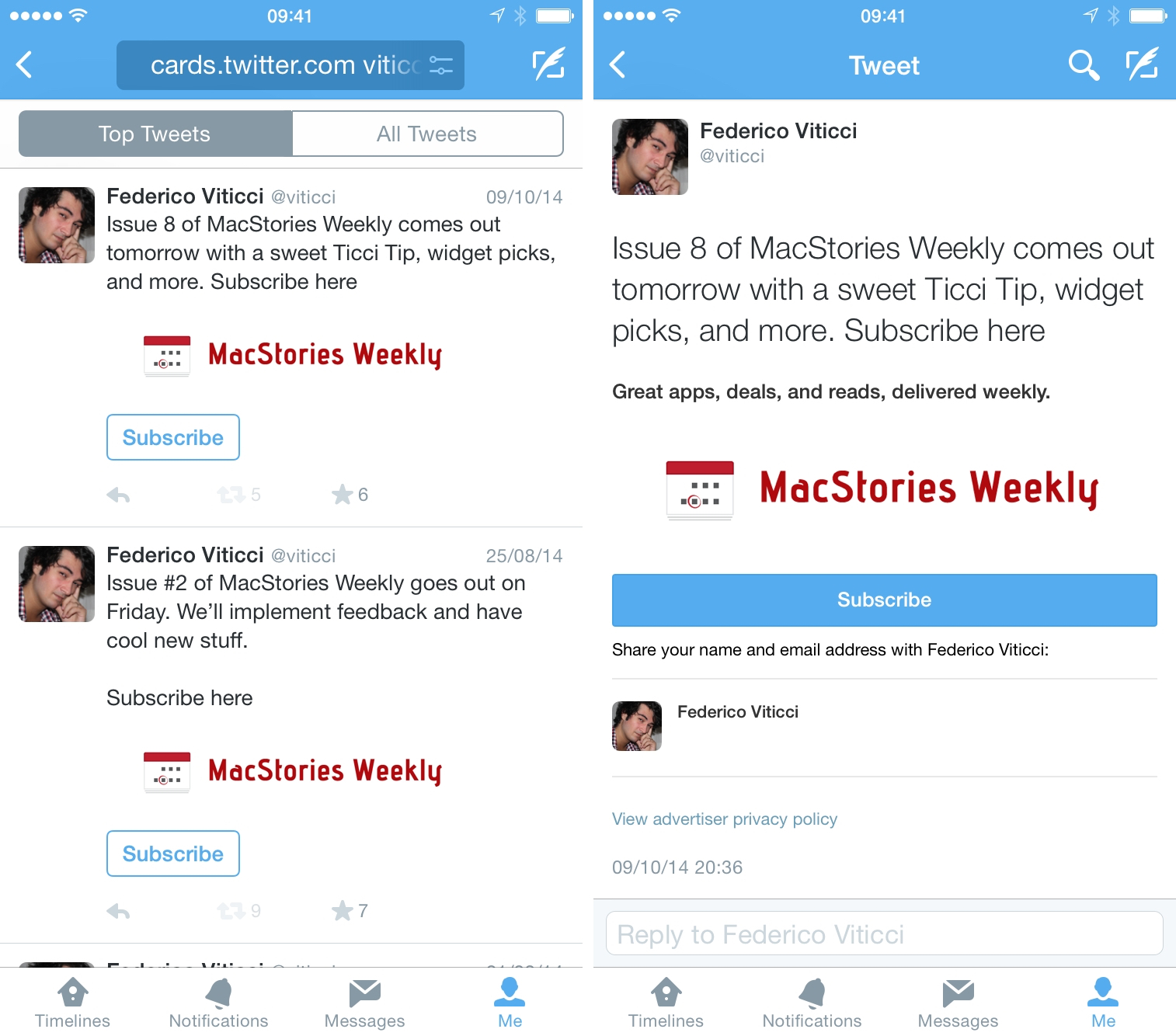 I implemented this card type for our MacStories Weekly newsletter: thanks to MailChimp integration, I created a card that, once shared on Twitter, displays a brief description of our newsletter and embeds a signup form that allows readers to subscribe with their Twitter email without ever leaving Twitter or sharing any other personal information with us. Our signups went up 50% since we shared the signup link through the Twitter card. You can see it in action on the web here.

Twitter for iOS gets a bad rap because it doesn’t support advanced features such as timeline syncing, keyword filtering, custom image upload settings, or share sheets. And I totally understand – it’s hard to use Twitter’s limited sharing menu after you see what Tapbots has done with Tweetbot 3.5.

However, the Twitter apps have plenty of nice touches and modern integrations, and Cards are a good example. Extending classic image preview capabilities to different types of content makes sense for what Twitter has become and how people use it on mobile devices. I look forward to seeing the new Twitter audio cards in the timelines of musicians and podcasters I follow.