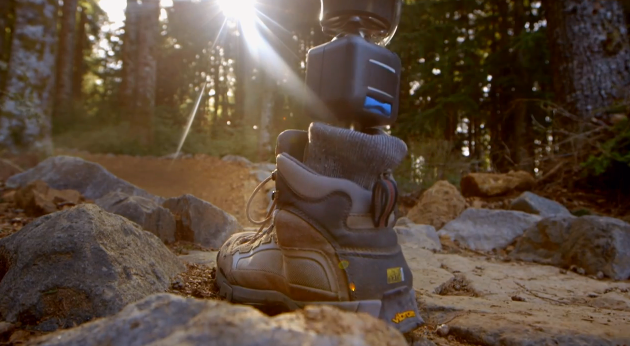 Amidst talk of inconsistent gradients in the first beta of iOS 7 and Jony Ive’s taste for neon colors, Apple would like to remind us how the world is being changed by technology. Specifically, how real people – actual human beings, not faceless corporations – can make an impact and change someone else’s life with apps.

In a 10-minute video uploaded earlier today on their YouTube channel, Apple has essentially produced a follow-up to last year’s developer video. This year, Apple has decided to showcase apps that are enabling people with prosthetic feet to control their movements from an iPhone; that allow doctors in Africa to instantly diagnose symptoms on people who have never seen hospitals or received proper healthcare; apps that allow a parent to listen to his kid, who was never able to speak. And in the process, Apple focuses on the other side of the coin – the people who make apps.

It is a powerful, emotional video that carries a deep message. Since Monday, iOS 7 has been criticized by many for lacking a unifying vision, for going too much in the opposite direction of what iOS used to represent, for being “fashionable” instead of truly innovative. I think that this new video, appropriately uploaded during WWDC and the ongoing debate on iOS 7’s new look, fits perfectly with Apple’s other strong message from earlier this week – Designed by Apple in California.

Making apps has, clearly, become a new economy in itself. It created jobs, new millionaires, and companies that, like well-oiled machines, are capable of intelligently operating the App Store’s freemium and IAP models to generate a lot of revenue on games and other kinds of apps. This is the inevitable consequence of running a platform, the App Store, that is the only source of software for over 600 million iOS devices sold around the globe.

But Apple knows that, alongside the big name companies and game publishers, there are hundreds of genuine good stories about people whose life hasn’t simply been made more enjoyable by Angry Birds, but deeply transformed by powerful, groundbreaking apps. The stories worth telling. The ones that, as Jobs said three years ago, help you get out of bed in the morning and go to work. The problems that you wish would never touch your kid or a loved one but that, unfortunately, sometimes do. The sense of meaningful achievement in seeing your app impacting people’s lives in positive ways. How, thanks to modern technologies and several other choices made over the years, some of those problems can be alleviated, if not completely solved.

“Who will this help? Will it make life better?”, Apple asked us, and themselves, this week. Beyond cynicism, legitimate taste in operating systems and tech companies, and critiques on the App Store (myself included), let’s consider how lucky we are to live in a world where someone can make an app to change another person’s life. Because for every 100 flashlight apps, there’s a good story worth telling.

“I’m just a guy who saw a problem that needed to be solved”, says a developer in Apple’s video. That’s the power of apps.