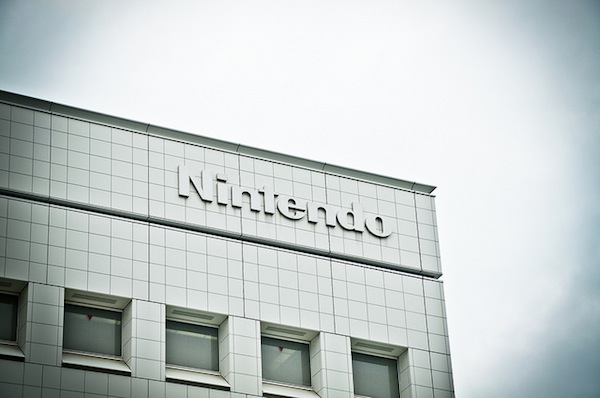 A great piece by Craig Grannell at Revert To Saved about the current state of Nintendo:

For a long time, I considered Nintendo the Apple of gaming—a company that cared about the details and about the right things (fun, excitement, enjoyment). Nintendo’s problem these days is that Apple is now the Apple of gaming—and the Japanese veteran needs to fight back, perhaps borrowing some of the tricks used by the plucky American upstart.

Yours truly, two months ago:

It’s always about the games, ultimately, but the hardware matters, too. More importantly, integration of hardware and software matters, and with my iOS gaming background I think Nintendo still has to get this right. Using the 3DS after years of iPhones and iPads feels strange because I’m dealing with a device that’s pretty capable spec-wise, yet doesn’t show the same amount of attention to detail, integration and flexibility that my iPhone has. I can play Angry Birds on my iPad, quickly look up a webpage, send an iMessage to my friend real quick and then effortlessly come back to the game. I challenge you to do the same on the 3DS with that joke of Internet browser and “suspended” software on the Home screen.

The problem with Nintendo is that for the longest time they thought only geeks and iPhone nerds were paying attention to App Store games, replacing their handhelds with iPads and iPods. It turns out, previous Nintendo customers are actually moving to mobile platforms – I’ll throw Android in the mix as well – for all their gaming needs. Blame changes in society, blame the recession, blame the advancements in graphics processing that made Infinity Blade II possible – mobile gaming is very much real, albeit immature, and Nintendo failed to forecast just how much of an impact it would have on its business. Shame on them for being so stubborn. Now they are paying the consequences, and will likely continue to pay until the Wii U comes out. To get a visual representation of what Nintendo is exactly facing, check out this chart by ngmoco’s Ben Cousins comparing Apple, Microsoft and Nintendo by revenue: 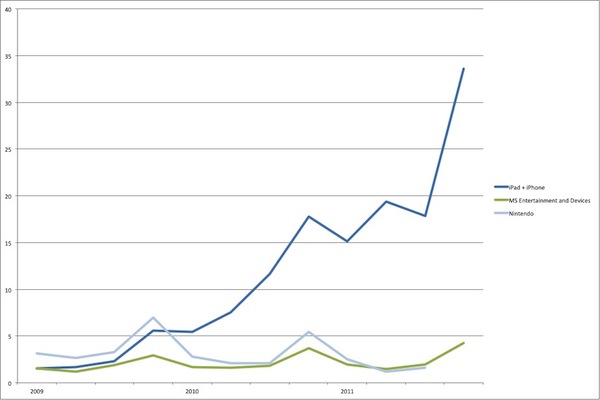 What’s next for Nintendo? That’s a question with no answer, really, as you can’t just know what the company’s up to without having some kind of inside knowledge of their secret plans. Rather, I’d start by proposing some ideas that might be worth considering at the light of iOS’ popularity in mobile games and the changes in consumer behavior:

- Ship a moden interface for managing a device: users don’t want to be treated like 3 years-old anymore. Make it accessible, flexible, elegant, fast. This is functional to the point below, which is:

- Make accessing, saving and managing digital content easier. Nintendo’s current solution is a joke – will Nintendo Network be any better? We shall see.

- Embrace social networking: let players link their Nintendo Network profiles to their Twitter, Facebook or Google+ identities, and allow them to interact with Nintendo content outside of Nintendo’s online platform.

- Drop resistive touch-screens: the future is multi-touch. Delay the Wii U if necessary to make it absolutely right.

- Don’t drop cartridges entirely, but embrace a digital distribution strategy that makes sense. Advise all developers to release digital versions of their games on Nintendo Network, and perhaps reward buyers of physical copies with free unlockable in-app extras. The goal is to achieve a win-win situation both if you’re buying digital or physical.

- Create fresh, innovative, strong new IPs while emphasizing the importance and value of historical brands. Fortunately, that seems exactly what Miyamoto is doing.

- Use cutting-edge hardware: let’s face it, people like to play Call of Duty and Uncharted these days. Whilst good graphics aren’t synonym of good games, they sure help in nurturing an ecosystem of variegate games – those who make presentation their selling point, and the ones that are more focused on gameplay with less impressive graphics. Angry Birds was possible in 2009, but that didn’t stop Apple from leap-frogging itself year over year with the A4 and A5. Make consoles that can stand the onslaught of the Tegras and A6s released every year.

- Ultimately, stay true to gaming. Users don’t want to read emails on their handheld or have Office on it. Internet-connected doesn’t mean PC-like.

This morning I retweeted three tweets by Zac Cichy:

1) Delay the Wii U, drop all plans for physical discs, include an SSD instead.2) Next 3DS - SSD.3) iCloud-isize Your Game Sales

4) Make it so that VC / ware purchases can be universal between Wii / DS5) Invite Any and All developers to make Anything, within reason.

Nintendo needs to ape Apple in some key ways that matter, and continue to be Nintendo in the ways that they already know work.

I don’t know how Nintendo should implement these proposed changes in the next months, but I am sure these are ideas more than just a couple of bloggers agree with. The money just isn’t there anymore, and Nintendo needs to evolve before it’s too late.