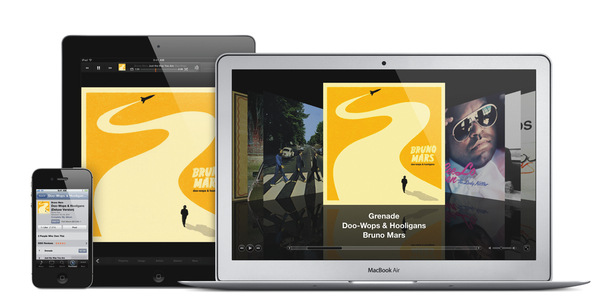 From my iCloud overview in October, titled iCloud: The Future of Apple’s Ecosystem:

The problem Apple had to face in the past four years is that for millions of people iPhones and iPads have become substitutes to the PC. Over a third of iTunes Store content is now purchased on iOS devices, Apple’s Eddy Cue said at the Let’s talk iPhone media event last week. What started and was celebrated as the hub of the digital revolution became a burden for Apple as millions of customers began using iOS devices as their main devices. Apple was once again faced with a challenge: if people no longer want to use the hub and accept the trade-offs required to manage our digital lifestyle, where’s the new hub? And how will content be distributed in the ecosystem if there’s no visible hub to start with?

iCloud changes the way we interact with our devices. Ten years after the digital hub revolution led by the Mac and iPod, Apple’s ecosystem has evolved and turned into a variegate selection of notebooks, desktop computers, iPhones, iPods and iPads. iCloud goes beyond the simple function of a new digital hub: iCloud, built into iOS 5 and Lion, is the new soul of Apple’s hardware that unifies music, videos, photos, apps, books and documents. iCloud is a huge change for Apple’s ecosystem not just because of its new technology — it’s a new software paradigm that will deeply affect Apple’s devices and how we work with them in the next years. Ten years from now, when it’ll likely be time for another digital revolution, we’ll look back at 2011 and iCloud’s launch.

During today’s earnings call – in case you missed it, Apple today reported its biggest quarter to date – CEO Tim Cook seemed to agree with this vision. He said that “iCloud is more than a product, it’s a strategy for the next decade.”

What strikes me as remarkable about this statement isn’t the simplicity of the message alone, it’s how well it plays with Steve Jobs’ original Digital Hub strategy in retrospect. The way I see it, today’s comments from Cook about iCloud declared the historic Digital Hub officially dead, yet sounded amusingly familiar at the same time. That Apple is a product company that also happens to do business with services isn’t new – but listening to Tim Cook and Peter Oppenheimer discussing the results, the future projections, the customer feedback and overall strategy in a single conference call is enlightening in a way it provides insight into Apple’s core values. Products matter, but what customers expect to find around a product is equally important – the ecosystem matters. Every recent move from Apple can be seen as part of the iCloud big picture: the 4S with an amazing camera that shoots photos that are backed up online; iTunes Match and its cloud-based music library; content deals for Apple TV; iBookstore and Textbooks that are backed up to your iCloud account. And when you think about it with today’s numbers in mind, it all starts to make sense not just from a conceptual standpoint, but from a business perspective as well.

Apple customers are willing to pay for a superior user experience through a solid ecosystem. And Apple is betting on that.

The “strategy for the next decade” that we’re covering today is what, I believe, the majority of users will see as the operating system in 10 years. And if you need a quick recap as to why Apple moved on from the Digital Hub, let Steve remind you.

“We’ve got a great solution for this problem. And we think this solution is our next big insight. Which is we’re going to demote the PC and the Mac to just be a device. Just like an iPhone, an iPad, or an iPod touch. And we’re going to move the Digital Hub – the center of your digital life – into the cloud.”