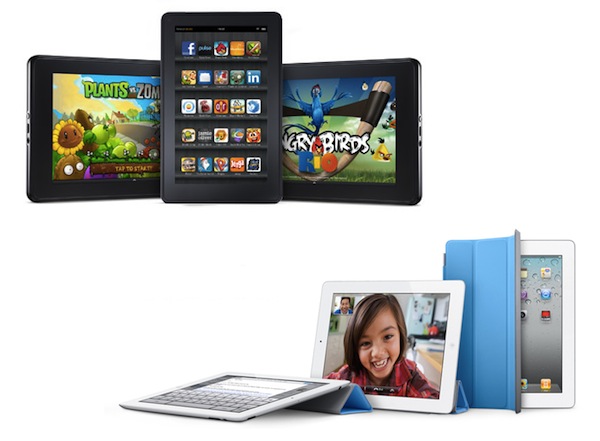 Earlier today Amazon announced a completely revamped Kindle family, which includes the standard $79 Kindle, the $99 Kindle touch, and the much-anticipated $199 Kindle Fire tablet. Ad-supported options and hands-on coverage aside, I’d like to quickly touch upon a common mistake in today’s tech headlines – that the Kindle Fire will “kill” the iPad.

First off, Amazon gets it: they know an ecosystem has to scale to different devices and operating systems, so they diversified their approach to ebook reading and media consumption with three different sets of Kindle (Keyboard/$79 Kindle, Touch, Fire) all tied to a single defining feature: your Amazon.com account.

In discussing Microsoft’s approach to the concept of ecosystem when compared to Apple’s, I wrote:

In Apple’s vision, separate operating systems can live inside the same ecosystem. The single defining aspect of this vision is the Apple ID, which on iOS devices, Macs, PCs, and web browsers gives you access to:

Compare this to Amazon, which is doing the following:

Amazon is building an ecosystem, and all you need to access these services is a single Amazon.com account, possibly connected to a credit card. Like Apple, it may be difficult to keep everything in one account, but it’s not like the average consumer needs all the functionalities of Web Services anyway. Furthermore, Amazon controls its platforms with the web infrastructure they’ve created, and the newly announced Silk browser is the perfect example of how Amazon should also be able to somehow control and optimize web traffic operated by its devices.

There’s more. Amazon gets it because they’re offering a limited choice of devices to use with their ecosystem. Many often cite Apple’s product line-up as an example of simplicity and “just one model” philosophy, but if you think about it, there are multiple ways to get started with iOS:

and the Mac (all with multiple configuration options available):

Amazon may kill off some members of the Kindle family soon (DX perhaps?), but here’s what they offer today to access the Amazon.com ecosystem:

The similarities in the underlying concepts of “ecosystem” and “uniqueness” between Apple and Amazon are clear, but there are some key difference that many people don’t seem to properly consider when referring to the latest Kindle Fire as an “iPad killer”. Assuming that by “killer” they actually imagine a scenario where people will stop buying iPads altogether and start seeing the Fire as the only option, Amazon would still need Apple’s retail power at an international level. These people that write “iPad killer” seem to forget that the iPad is available in 64 countries today. Amazon’s Kindle Fire will ship November 15th in the US. So let’s put the “killer” argument behind us once and for all.

Amazon is about to launch a product that may end up being a feasible alternative to the iPad for some people, a product shares several similarities with Apple’s approach to the digital ecosystem. I have no doubt Amazon will sell millions of these new Kindles, and I think the Fire in particular will prove popular with families, readers, movie watchers, gamers – average consumers that may prefer a cheaper device integrated with the Amazon.com account they already have and use daily.

It’s hard to form a complete thought on Amazon’s new strategy because they’re just getting started. The unification process of Amazon’s ecosystem and diversification of unique devices begins today, and the Kindle Fire will ship in less than two months. It’s hard to imagine whether Amazon’s long-term plan is “trying to be like Apple” with international releases, rich App Store, deals with music labels, partnerships with carriers, and so forth. It’s also worth considering that Amazon isn’t completely independent from others yet, as the Kindle Fire runs on a modified version of Android 2.x with possible legal implications in patent fees. And more importantly, it doesn’t even make sense to “judge” the Kindle Fire right now as a winner or PlayBook when we even haven’t tried one. But two months from now, right ahead of the holiday season, let’s picture the following situation: assuming an average consumer interested in reading, listening to music, playing games, watching movies and browsing the web has $500 to spend, will he pick an iPad or a Kindle Fire? And is there a reason to pick both?

That’s where ecosystems prove their strengths.