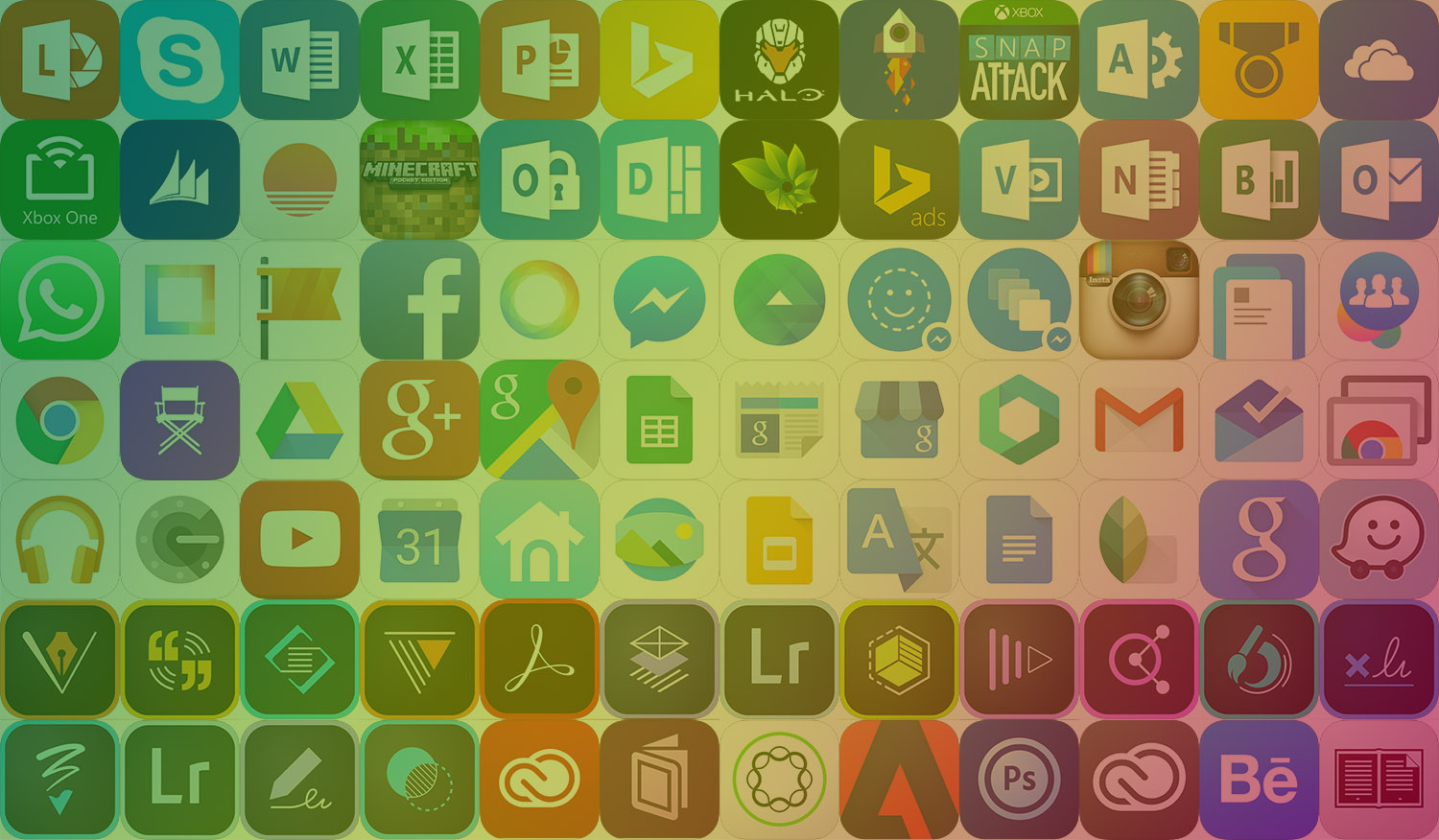 Apple doesn’t make a single Android or Windows Phone app, and makes barely anything for Windows. But Apple’s reluctance to develop on other platforms hasn’t stopped Google and Microsoft from bringing their own apps across to iOS. That shouldn’t be any surprise at all, given the different business strategies the three take. But what might be surprising is the extent to which Google and Microsoft have committed to bringing apps to iPhone and iPad users.

You are no doubt aware of the big apps from Microsoft (Word, Outlook and Minecraft) and Google (Gmail, Maps, Calendar), but the reality is that these two companies alone have over 150 apps available on the iOS App Store today. For good measure, I’ve also taken a look at the iOS development efforts from Adobe and Facebook, which are also significant.

Throughout this article I’ll refer to apps being ‘actively’ developed. Because I don’t have intimate knowledge of the status of all these apps, I’ve just used the metric of whether the last update was in the last 12 months; if it has been, it is active. Maybe I should have been more restrictive in my definition, but I’ll explore frequency of updates in more detail shortly.

I knew that Microsoft and Google made a lot of apps, but I thought the total number would be in the twenties, or maybe thirties when I added them all up. I was so very wrong. Microsoft currently has 92 apps on the iOS App Store. Google and Adobe are a little behind with 63 apps each and Facebook has 31. Things are a little more even if we only count active apps, but Microsoft still has 78 apps, followed by Google (57), Adobe (50) and Facebook (28).

The other interesting tidbit I discovered was the sheer scale of apps that these four companies used to have on the App Store but have since pulled from sale. Google leads the pack on this one, with a staggering 79 apps. A common trend I did notice was that these ‘dead’ apps were frequently apps from companies that were acquired. For example, one of Microsoft’s ‘dead’ apps is Accompli, an email client that Microsoft bought and essentially re-released as Outlook for iPhone. So don’t read too much into the ‘dead’ apps number: it includes a lot of acquisitions that have been re-released or integrated into another app.

If you’re a bit sceptical about those huge numbers, you might be more interested to know just how frequently those apps are updated. So I have also looked at when each app was last updated. The numbers show that the last update for 44% of Google apps in the iOS App Store was in the last month. The numbers are similar for Facebook (42%) and Adobe (41%); Microsoft falls behind a bit, but still has a respectable 32% of apps updated in the last month.

Perhaps the most fascinating difference between these four companies is when you compare which iOS devices they support. The difference is most stark between Facebook and Adobe. Facebook is overwhelmingly iPhone-only, with just 8 apps (26%) that also run on the iPad, and none that are iPad-only. Adobe on the other hand, has just 4 apps (6%) that are iPhone-only, whilst having 22 apps (35%) that are iPad-only and 37 (59%) that are Universal apps. Although this makes sense given that many of Adobe’s apps are content-creation focused, and make more use of the iPad’s larger scren. Google is also interesting, with a large majority of their apps (76%) being Universal apps, with just 1 iPad-only app.

Not particularly surprising is the pricing structure chosen by Google, Facebook, Adobe and Microsoft for their iOS apps – overwhelmingly free. Only 6 of the actively developed apps are paid, compared to the 196 free apps. 4 of those paid apps are games from Microsoft, whilst the other 2 are apps from Adobe.

The commitment from these companies to develop dozens and dozens of iOS apps has been fairly successful too. App Annie’s statistics for March 2015 placed Facebook in 2nd, Google in 3rd and Microsoft in 9th when it comes to total app downloads. Although if we look at the top companies by revenue, none of the four companies discussed today appear on that list, but that should be fairly obvious given how few in-app purchases and paid apps are offered by these companies.

If we look at the App Store’s top charts for a particular day in the US, there’s a notable presence from three of these companies, but not an overwhelming one. For the top 100 free iPhone apps, 11 are from Facebook, Google or Microsoft. On the iPad side, the number rises to 18, although again, no Adobe apps (they start appearing at #118 with Adobe Acrobat DC and #366 with Adobe Slate). For the top paid app charts, only Microsoft’s Minecraft makes it, but it achieves the number 1 rank for both the iPad and iPhone.

Facebook is particularly dominant at the top of the free charts, with an incredible 4 apps in the iPhone top 10 (Facebook, Facebook Messenger, Instagram & WhatsApp). And Microsoft is far stronger on the iPad (5 apps) than it is on the iPhone (1 app), thanks to its Office apps (Word, Excel, PowerPoint and OneNote) joining Skype in the top 100. 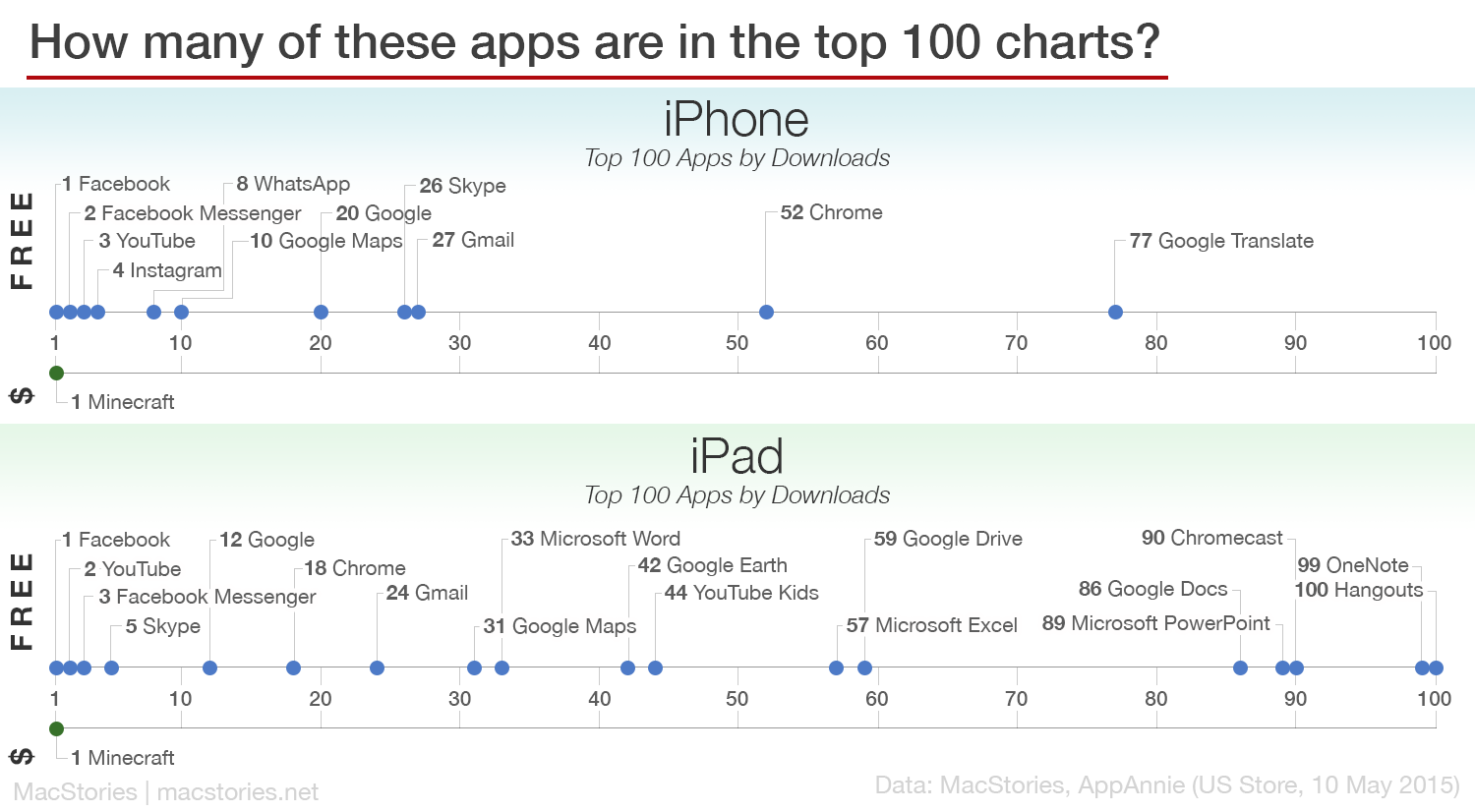 This exploration into Google, Facebook, Microsoft and Adobe’s iOS development efforts isn’t the full story of course – there are other large companies doing substantial work on iOS. I highlighted Google and Microsoft because they are arguably Apple’s two biggest competitors and I thought it’d be fascinating to see just how committed they are to delivering iOS apps. Facebook was also an easy choice, simply because of the sheer size of their social network, and because it was readily apparent that they have some of the most popular apps on the App Store. Adobe was an interesting choice, but I also highlighted them because they’ve been doing some great work in bringing a vast array of new content-creation apps to iOS that complement their desktop apps.

I don’t think there’s a single lesson to take away from this article, but there are a lot of interesting tidbits. Remember also that I only focused on four of the big technology companies that develop for the App Store. There are others like China’s Tencent, fourth in App Annie’s top companies list, with over 200 apps, Disney with over 400 apps and Electronic Arts with nearly 700 apps.

The data used in this article was collected manually by myself, with a mix of information coming from App Annie (which proved incredibly useful) and Apple’s App Store. If you’d like the raw data and Excel spreadsheet I made, just email me.

Thanks also to Federico, who helped grab hundreds of app icons, most of which were used in the image at the top of this post. Naturally, there’s a workflow for it.

If you have any comments, corrections or would like more information, you can Tweet to me @greyham or email me.