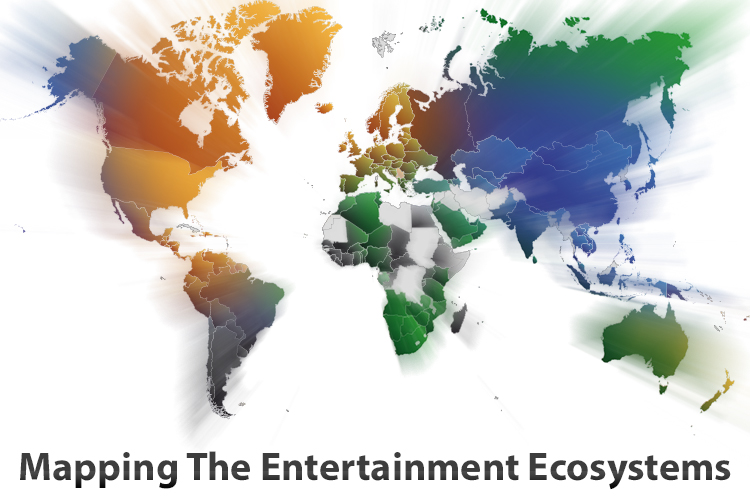 Please note: An update to this article is available here, it includes the December 2012 iTunes expansion (Music & Movies) as well as Xbox Music.

The choice of what phone or tablet to buy is one that often involves many considerations, chief amongst those is the physical device and the operating system that it runs. But I think there is a third fundamental consideration that is growing in importance: what services and entertainment ecosystems you’ll be able to access. You need only look back to the recent criticism of iOS 6, in which Apple replaced Google Maps with their own Maps app. Summing it up generally, Apple’s Maps app is sub-par to what it was replacing and that mattered to people - enough that Tim Cook felt the need to apologise for the frustration the switch caused.

I want to explore the third aspect in depth today, because it’s something that I feel is all too often downplayed by the technology press (which, coincidentally, is based predominantly in the US). I’ll also briefly discuss the fourth aspect as well at the end. Why are these two aspects so important? Well, smartphones and tablets are devices that have universal appeal, so for Apple or any of the other three to win the smartphone or tablet “race” - an entertainment ecosystem that is available across the world, not just in the US, isn’t just a cool extra feature, it’s a necessity. The US may be one of the biggest markets for such devices today, but is there any doubt that these devices will rival the prevalence of personal computers (which are everywhere) in years to come?

I’ve collected data on which countries each service is available in and then added in population figures to create many of the graphs and diagrams you’ll see below, mixed in with some of my own analysis and thoughts. Please note that the five HTML5 map diagrams are interactive, click on the logos of the four companies to compare their coverage.

Given that Apple’s iTunes Music Store was opened in April 2003, long before the other three began their music stores, it should be unsurprising to find that the iTunes Music Store has the widest reach. What did surprise me was how huge the difference was between Apple and the other three. I don’t think it would be an overstatement to say that Apple destroys them in this regard because the iTunes Music Store is available to nearly 3 times the population of Microsoft and Amazon (27.21% versus 9.76% and 10.75% respectively), and 6 times that of Google’s offering (4.47%). If you try comparing it in terms of raw numbers of countries it is available in, iTunes Music is available in 62 countries, which is an absolutely massive difference to Microsoft’s 8, Google’s 1 and Amazon’s 7.

Because Apple’s iTunes Music Store is available in so many more countries, it means it is the only one of those analysed here that services South America and South-East Asia. It isn’t complete coverage of those regions, but it is certainly substantial. One blindspot that even affects Apple though, is China, which does not have access to the iTunes Music Store - ditto for Africa.

A note on Xbox Music

The data on Microsoft does not refer to the new Xbox Music which has been officially unveiled and is about to launch, it refers to the existing Zune Music service. I would have used data on Xbox Music but Microsoft has not listed which countries will support it (as of publication) - with the exception of noting in their press release that it will be available in 22 countries. Evidently it is a huge step up from the current 8 countries that have the Zune service and should give Microsoft a big boost to the population they can cover.

When I put the data together, I was surprised to discover that Microsoft and Google both offer their movie stores to more countries than they do for their music service. It may only have been an increase in a few percentage points each, but when that percent figure is in reference to the world population, that equates to about an extra 300 million (Microsoft) and 440 million (Google) people being able to access that service.

Nevertheless, Apple again dominates. The iTunes Movie Store is available in 62 countries (the same as the Music store, but a few countries have been removed and some added) or 27.02% of the world’s population which is close to 2 times the population coverage of their nearest rival, Microsoft, which has 14.29%.

Incredibly weak coverage from all players

Apple, which had its music and movie stores operating in more than 60 countries, has a TV store operating in just 6 countries, or measured in population coverage, they go from ~30% to less than 9%. Microsoft matches Apple in coverage, but it should be noted that not every one of their regions include the ability to purchase individual episodes and TV seasons, but rather offer catch-up services from TV networks (such as ABC iView or Foxtel in Australia). Amazon covers just two countries (US, UK respectively) whilst Google has just the US covered.

Is it any wonder we’re perpetually waiting for an Apple TV?

The iTunes TV Store isn’t a new thing either - it was launched in 2005, a year before the iTunes Movie Store and yet it has far less international coverage. It may well be that their TV store isn’t a very profitable venture compared to the Movie and Music stores, but the fact they have been this slow (in only achieving coverage in six countries) leads me to believe that there may be other factors for the slow progress. In fact, given such little progress has been made in seven years, I’m inclined to believe that it is the US TV and cable networks that have been unwilling to embrace the new digital stores that the music and movie industry has slowly but surely got behind. Is it any wonder, given Apple, Microsoft, Google and Amazon’s struggle with making TV stores available internationally, that there have been numerous reports this year of Apple struggling to just hold negotiations together over a new “real” Apple TV, which would likely have a disruptive effect on the industry?

Amazon gets to shine

Amazon has pretty weak coverage for every other entertainment ecosystem, but books are where they finally get to shine. Like Apple and their iTunes Music Store, Amazon launched their eBook store in 2007 alongside their Kindle e-reader and have expanded its reach over the ensuing 5 years. Though notably, Amazon deals with international expansion differently to Apple - rather than creating local stores for every region, it only does that for a few (US, UK, Great Britain, Italy and Germany) and every other country that they support goes through the US store. But notably, Amazon still deals with publishers on a region-by-region basis, so even though someone in New Zealand may be purchasing books through the US Kindle Store, some content may not be available from them.

Thanks to Nate Hoffelder of The Digital Reader for some assistance in attaining the statistics for Amazon here.

China makes all the difference

Why is it this way? Well for the ‘old media’ stores, Apple and the others would have to (mostly) go out to the media giants in the respective industry and negotiate terms under which Apple would be allowed to sell their content. For every region, they have to repeat this process, potentially with other parties, complicating this process ten-fold. With the App Store, Apple just has to set up the system by which anyone can submit content and comply with any local laws and regulations. Unlike with the other content stores, they aren’t entering a market that already has established giants, instead, they’ve created a new market (with its iOS devices) that attracts content creators (developers) to freely come and sell their content.

I said earlier that there was four criteria for judging a particular entertainment service: selection of content, pricing, interoperability and international availability. Now that we’ve examined international availability, I quickly wanted to touch upon how accessible each of the services are on the devices we own. Whilst it isn’t particularly important in the short term if you own all Apple devices, or all Android devices, it is important in the long term or if you own products from a mix of the four companies I’ve examined today. 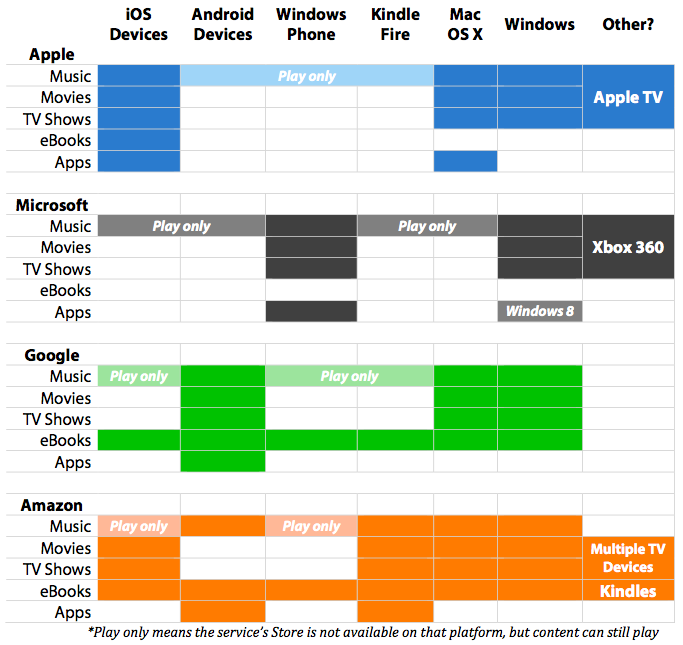 It’s pretty clear straight away that Apple, Google and Microsoft are mostly as “closed” as each other - Google certainly doesn’t have “open” entertainment ecosystems at this point in time. It is in fact Amazon that has the most interoperable entertainment ecosystem and this shouldn’t be much of a surprise, they don’t yet make many hardware products (like Apple) and they don’t license their software to their parties (like Google) - instead they make money on the content they sell. From this perspective it makes perfect sense that they’d put a lot of effort in making sure that content can be played on as many devices as possible.

A convergence towards Apple’s business model

It’s interesting to note that all four of the companies listed have various different core business models (hardware, search, retail, software) but they have all in recent years come to create personal computing devices with their own operating system running on top of the device and additionally these entertainment ecosystems. Five years ago, Apple was the only one doing this complete trio of device + OS + entertainment services.

Notably, these four companies, which are arguably the leaders in personal computing today, are all from the USA. It shouldn’t be any surprise then that the USA doesn’t miss out on any of these entertainment services.

It’s notable how miserable Amazon’s international coverage is for their entertainment services, with the obvious exception of the Kindle Store. It will be difficult for Amazon’s Kindle Fire tablet to gain considerable market share when all the services that it relies on to be a competent media tablet are so restricted to the US and very few other regions.

Whichever company is the “winner” depends on your circumstances (location, device, etc), but if you were to generally draw a conclusion I think it is clear that Apple would lead, Microsoft would be second, Google third and Amazon fourth. Again, that is a gross generalisation of all the above data but ignoring the exceptions (such as Amazon’s eBook dominance), I think it’s fairly evident which companies have put the most emphasis on international availability.