Night Mode and the Eternal City

Night mode has been the highlight of this photographic exploration of Rome. It is my favorite addition to the iPhone’s camera system this year (even more than the ultra-wide camera) and it plays into the idea of creative freedom granted by the iPhone 11 Pro.

At a high level, I like night mode for two reasons: it’s largely automatic, so you don’t have to decide whether it’s best if you enable it or not; and it’s been designed to bring out the detail in pictures that still look like shots taken at night. Unlike night modes I’ve seen on other modern smartphones, Apple’s night mode wasn’t designed to alter your midnight shots so they look like they were taken at noon: it was created to let you see more details and colors in the dark. And in the vast majority of cases, night mode works exceptionally well, producing stunning results.

After the Colosseum, my photo tour continued with the so-called Altar of the Fatherland, located between Piazza Venezia and the Capitoline Hill, right beneath the Roman Forum. Created to act as a symbolic link between the glory of Ancient Rome and the modern metropolis, it was designed with a neoclassical style featuring a cornucopia of architectural elements borrowed from the classic Roman and Hellenistic repertoire, such as stairways, fountains, colonnades, equestrian sculptures, and goddesses. You may disagree with its original purpose (it was built in honor of the first king of a unified Italy), but you can’t deny it’s quite the sight, particularly from the center of Piazza Venezia.

With night mode disabled, the Altar looks good, but the scene is clearly too dark: 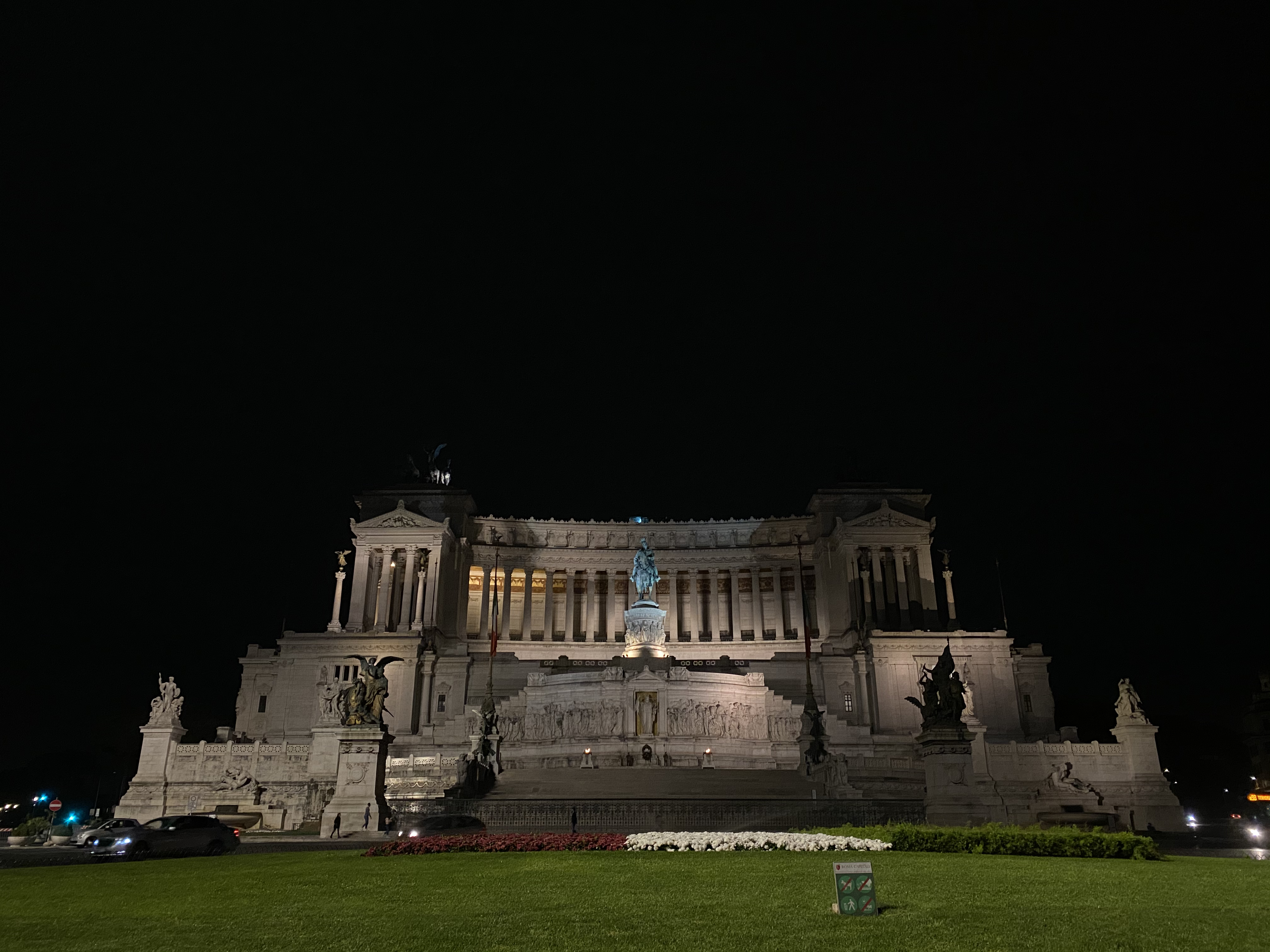 Altar of the Fatherland, taken from the center of Piazza Venezia with the wide camera. Night mode off.

And here’s what happens to the same shot with night mode enabled: 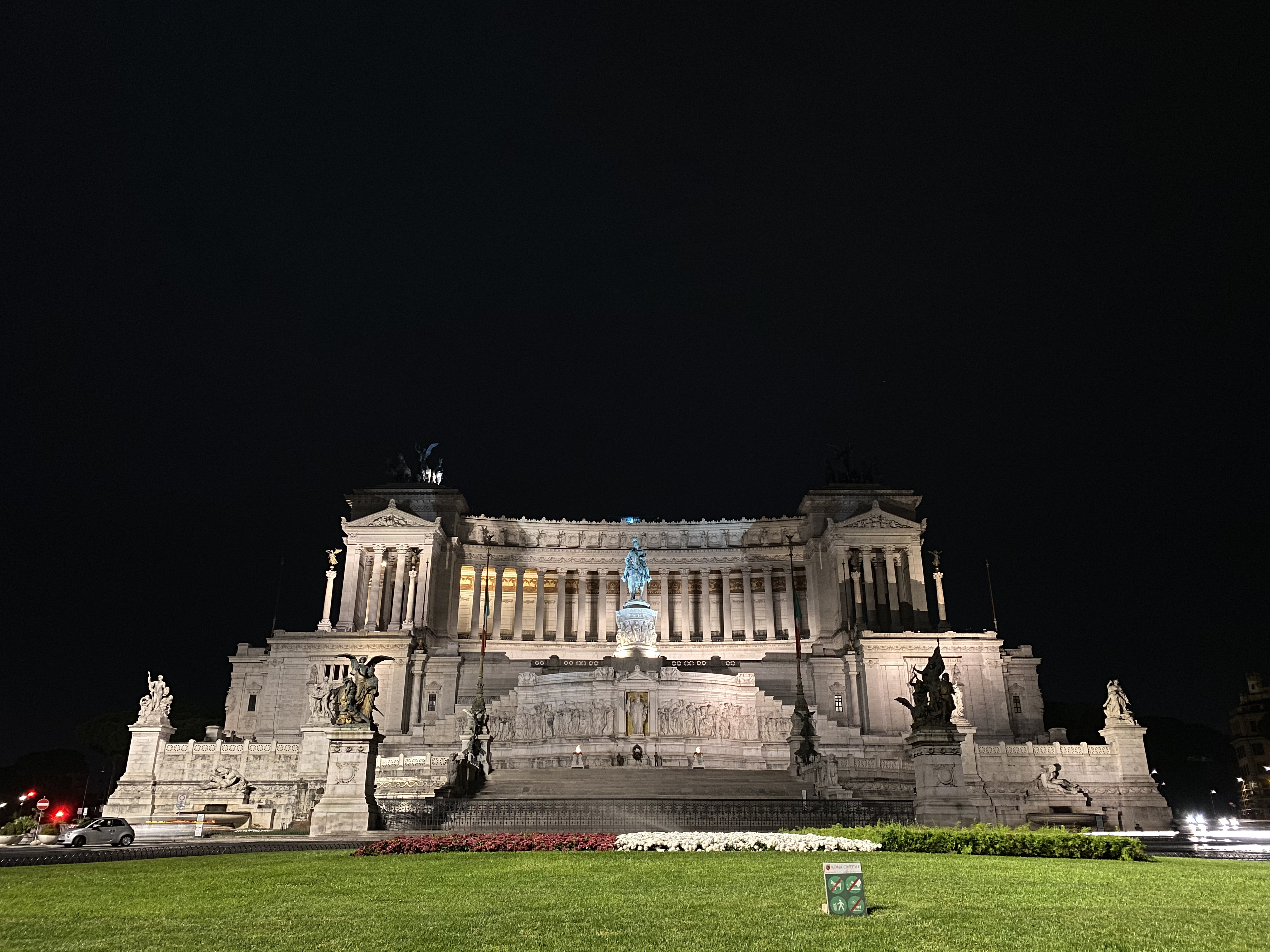 To disable night mode, tap on the moon icon in the upper left corner of the Camera app and turn down the slider until it says “Off”.

This photo is a great example of Apple’s night mode tech achieving its goal. The scene is still very much a nighttime shot and cannot be mistaken for a picture taken, say, in the late afternoon or evening. Night mode, however, lit up the entire structure, maintained the highlights generated by artificial lights located around the stairway and within the colonnade, and brought out the color of the grass and flowers (arranged in the order of the Italian flag) in the middle of the piazza. All of this while preserving detail and sharpness, without adding noise, and, more importantly, without requiring me to know anything of what went on behind the scenes. It just worked.

Here’s the Fontana del Moro, which is located at the southern end of Piazza Navona. With night mode disabled, it’s not a bad photo, but the subject is too dark given the absence of large artificial lights: 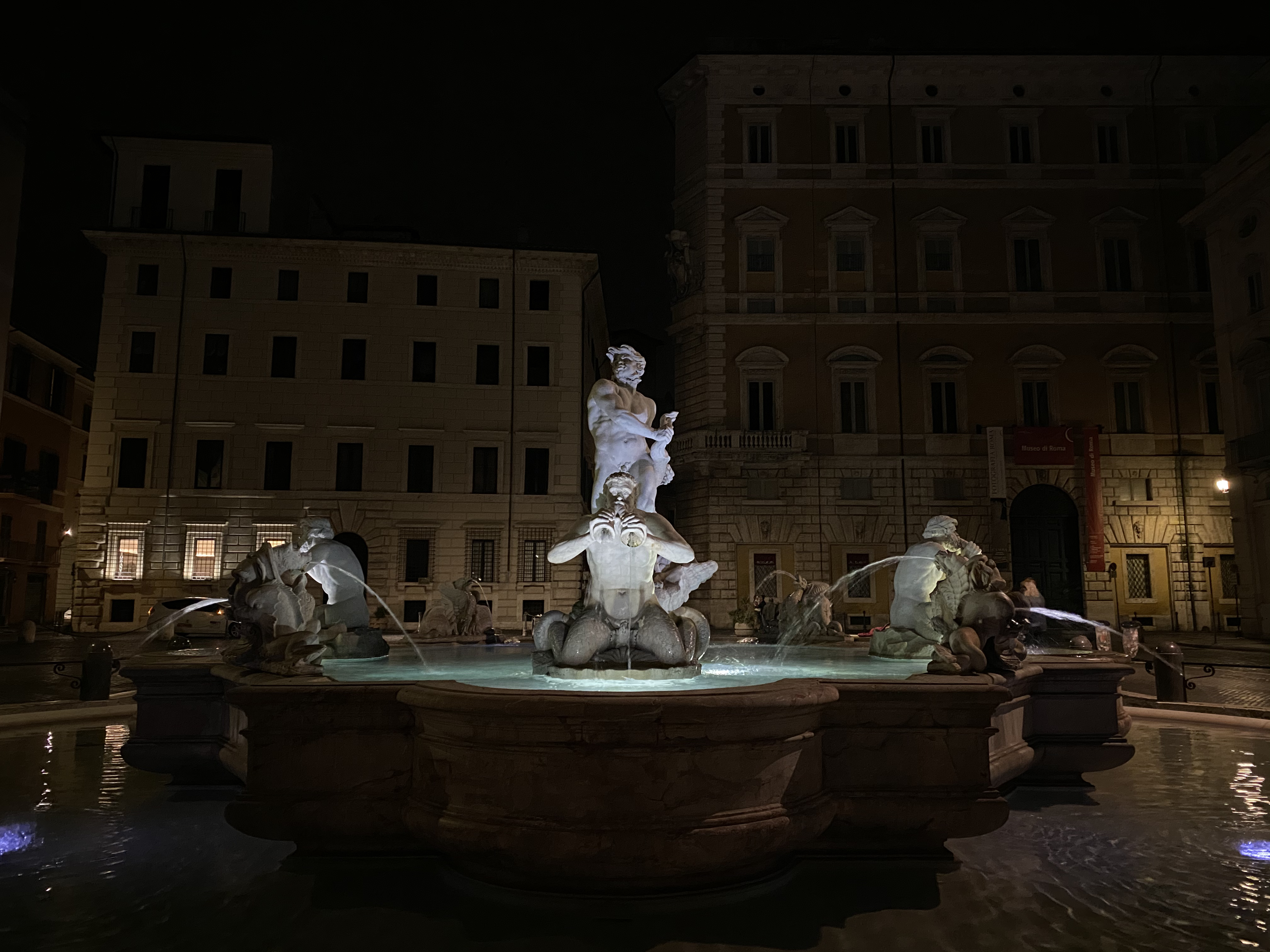 With night mode, the result is on a different level entirely: it still looks like a picture taken at night, but the iPhone’s software has illuminated the scene in a natural way, allowing us to see more in the dark – all while retaining accurate colors, crispness, and consistency with existing light sources. Take a look at what happened to the statues at the sides of the fountain and the buildings in the background: 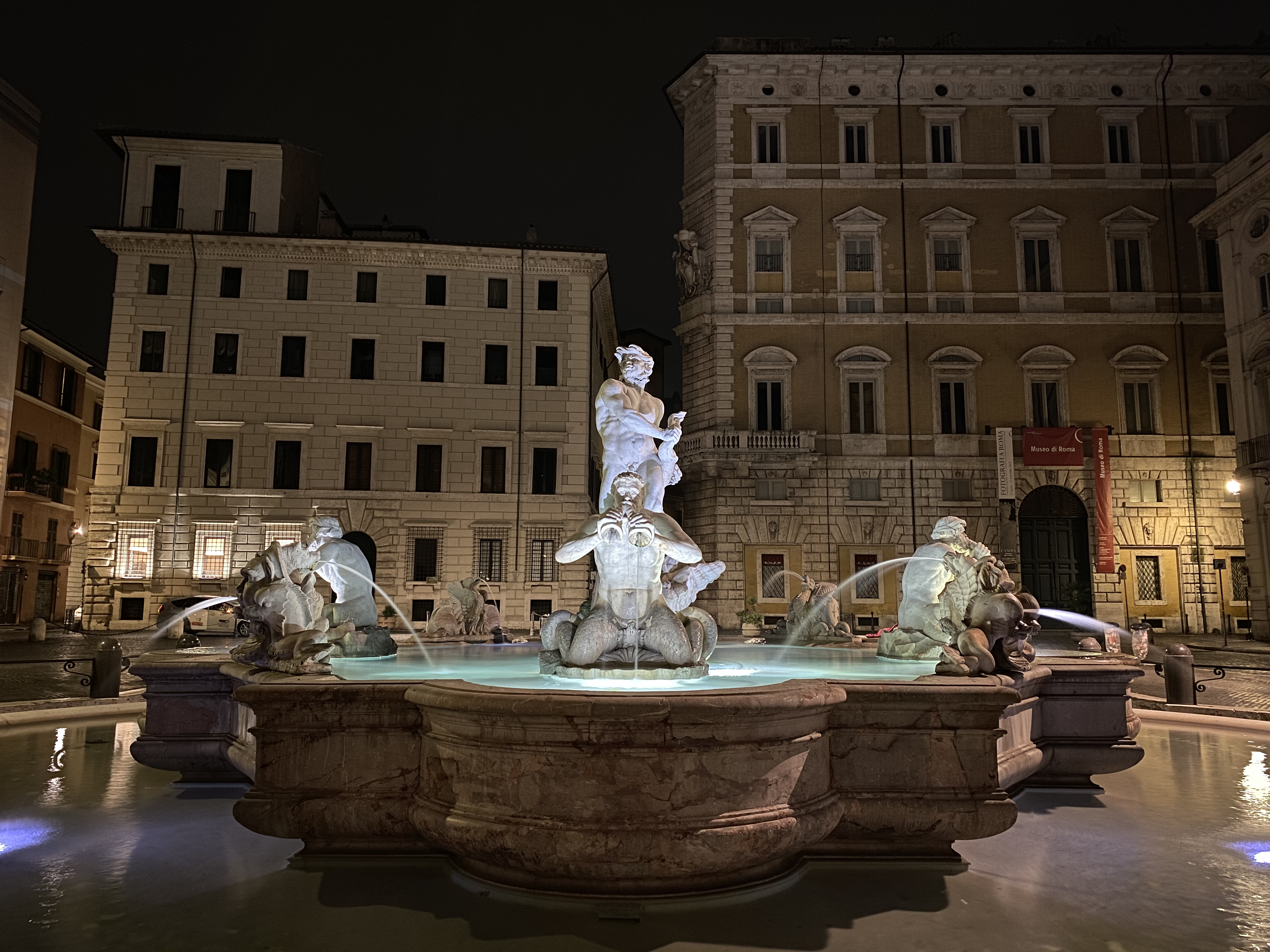 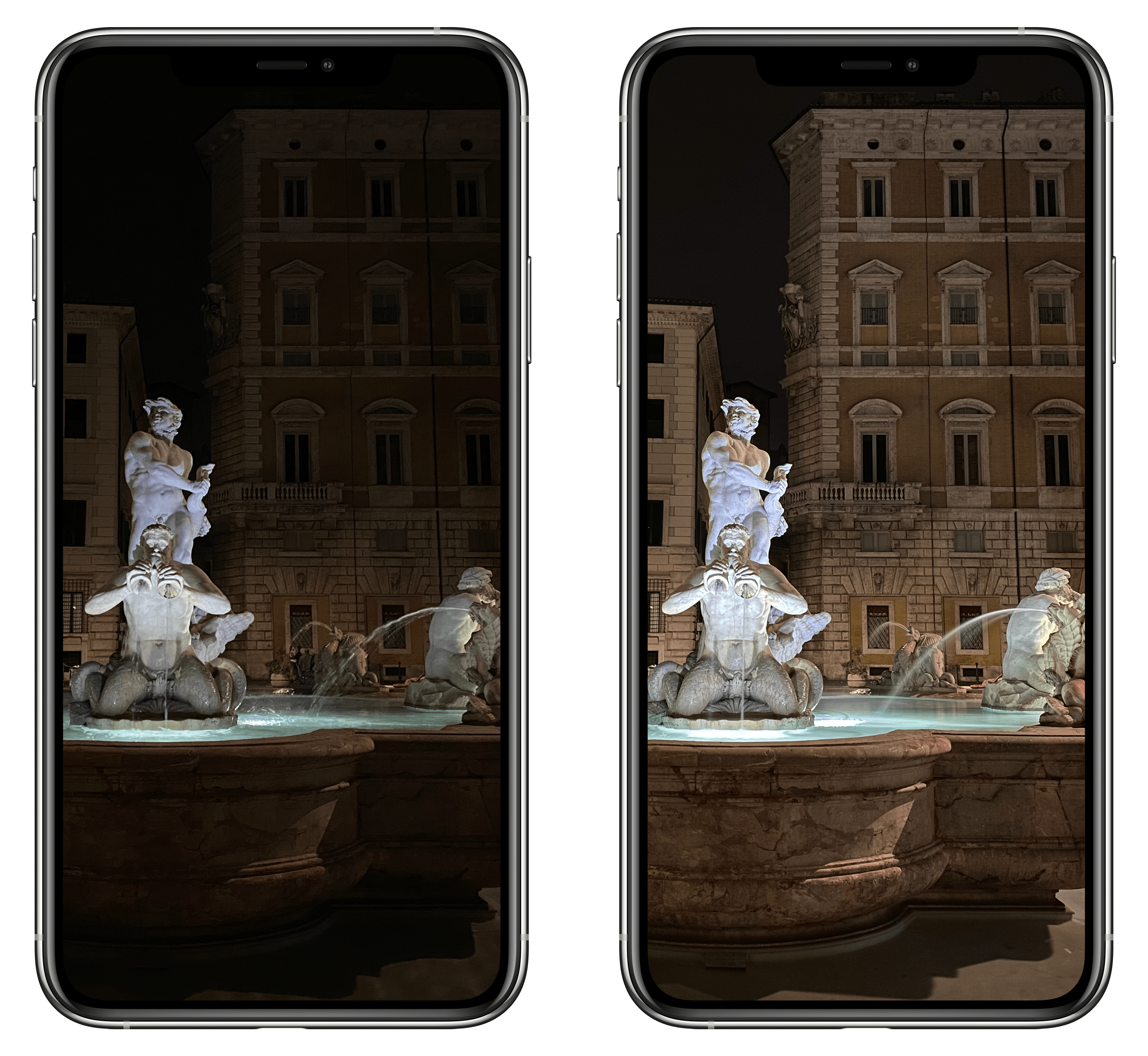 The night mode shot is crisp and brighter without feeling “fake”.

If you look at the water streams of the fountain photo above, you can see a byproduct of night mode’s fusion of multiple shots: in the night mode version, water has turned into a continuous, smooth stream. This effect is common to traditional long exposure photography, and it’s often intentionally used for capturing waterfalls or rivers.

The combination of this effect and night mode is behind what’s possibly my favorite photo of all – a wide-angle capture of the Fountain of the Naiads in Piazza della Repubblica: 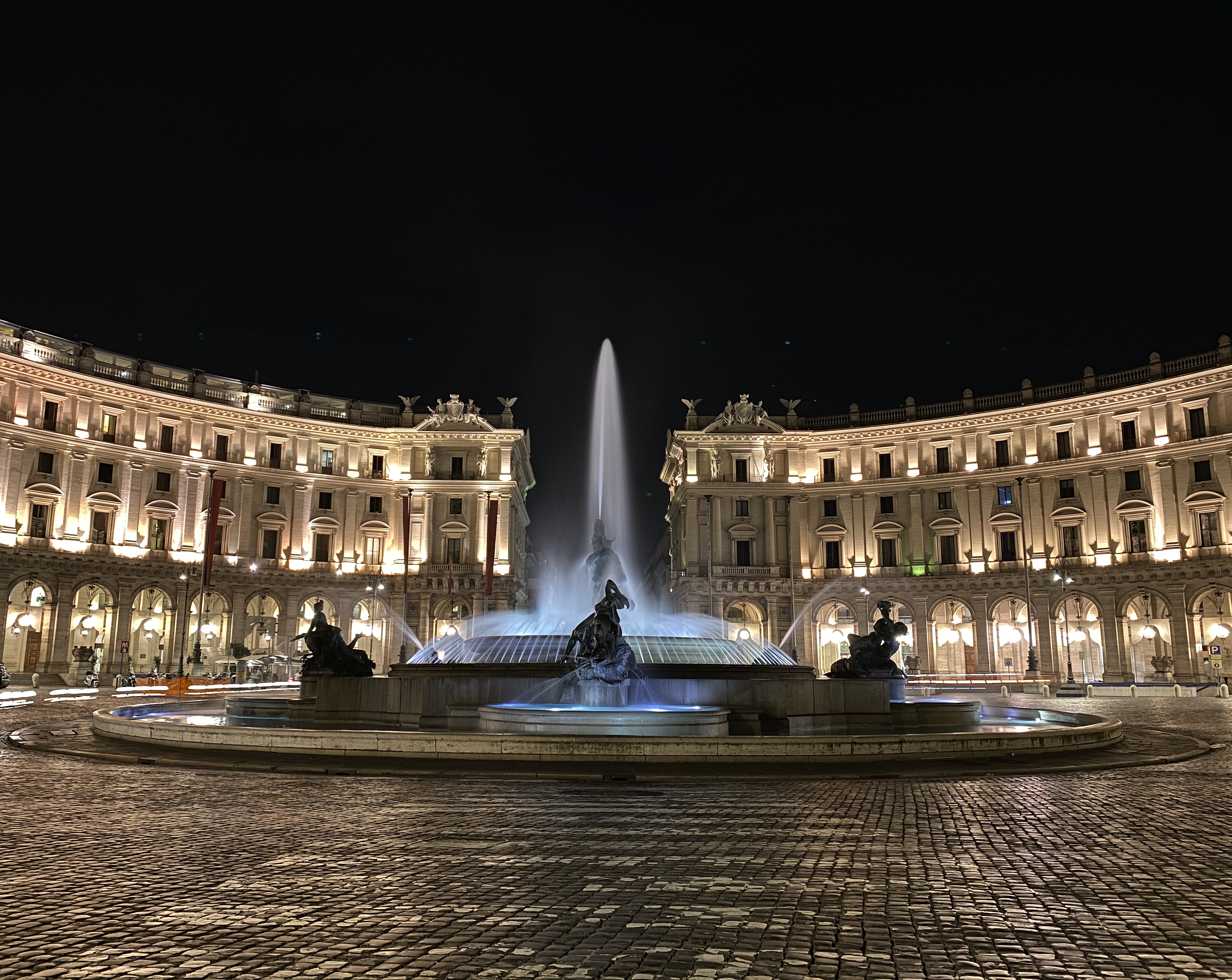 No previous iPhone could have taken this shot.

I absolutely adore this photo. To capture it, I set my tripod in the middle of Piazza della Repubblica, right by the side of the road, waited for no cars to be around, and initiated a 7-second night mode capture. No previous iPhone could have taken this shot – and, once again, keep in mind that this photo has no filters or adjustments applied. It’s what came out of the Camera app. Night mode hit a fantastic balance between the warmth of incandescent lights in the background porticos, the blueish tint of the fountain’s water streams, and the city’s dark sky.

In my tests, night mode failed to produce credible shots very rarely. After reviewing ~150 shots taken at night, I saved three questionable examples of night mode, and I think only one of them is a disappointing photo. 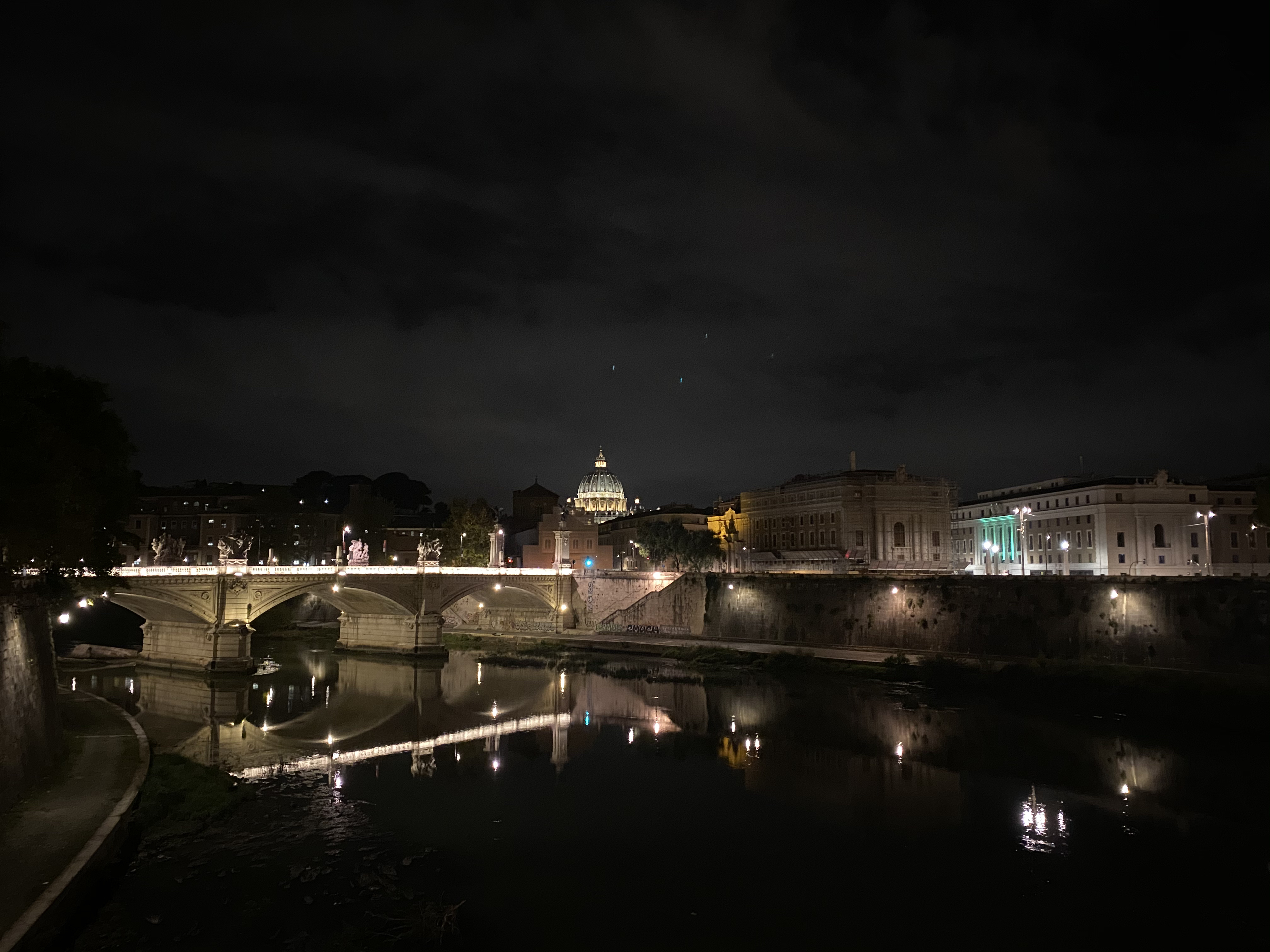 Now have a look at the night mode version: 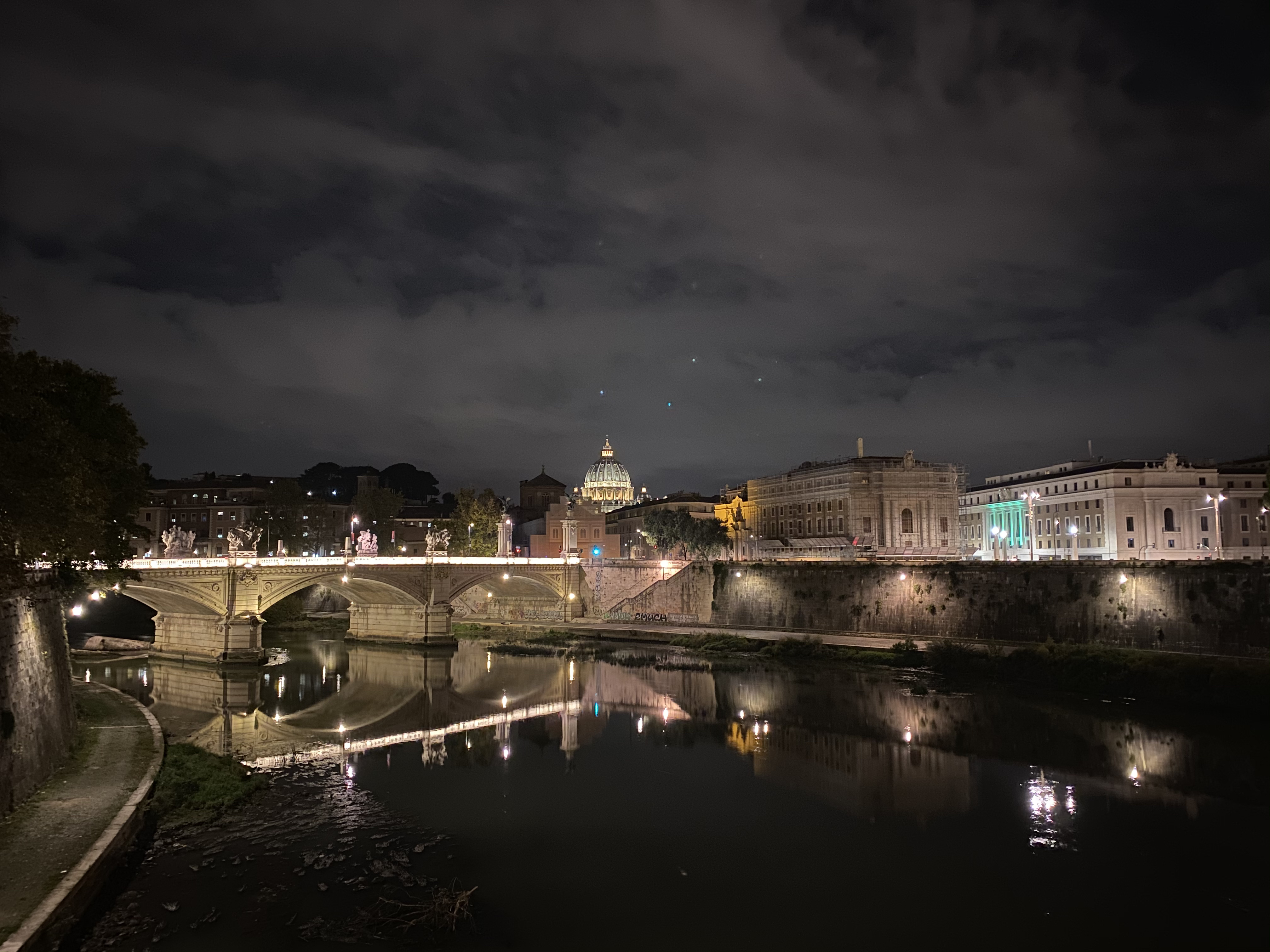 The entire scene has been illuminated: clouds are more visible in the night sky; you can see the buildings in the background of the left side of the bridge; the reflections in the river Tiber show more details of the buildings above. For me, this photo is right at the edge of how far night mode can push a dark scene: anything more than this and the photo would begin to look unrealistic to my eyes.

Whether you like night mode photos that alter a scene’s dark appearance too much is a matter of personal preference; I’ve had a couple instances in which I would have liked night mode to be less aggressive.

I took this photo with night mode disabled near the Trevi Fountain: 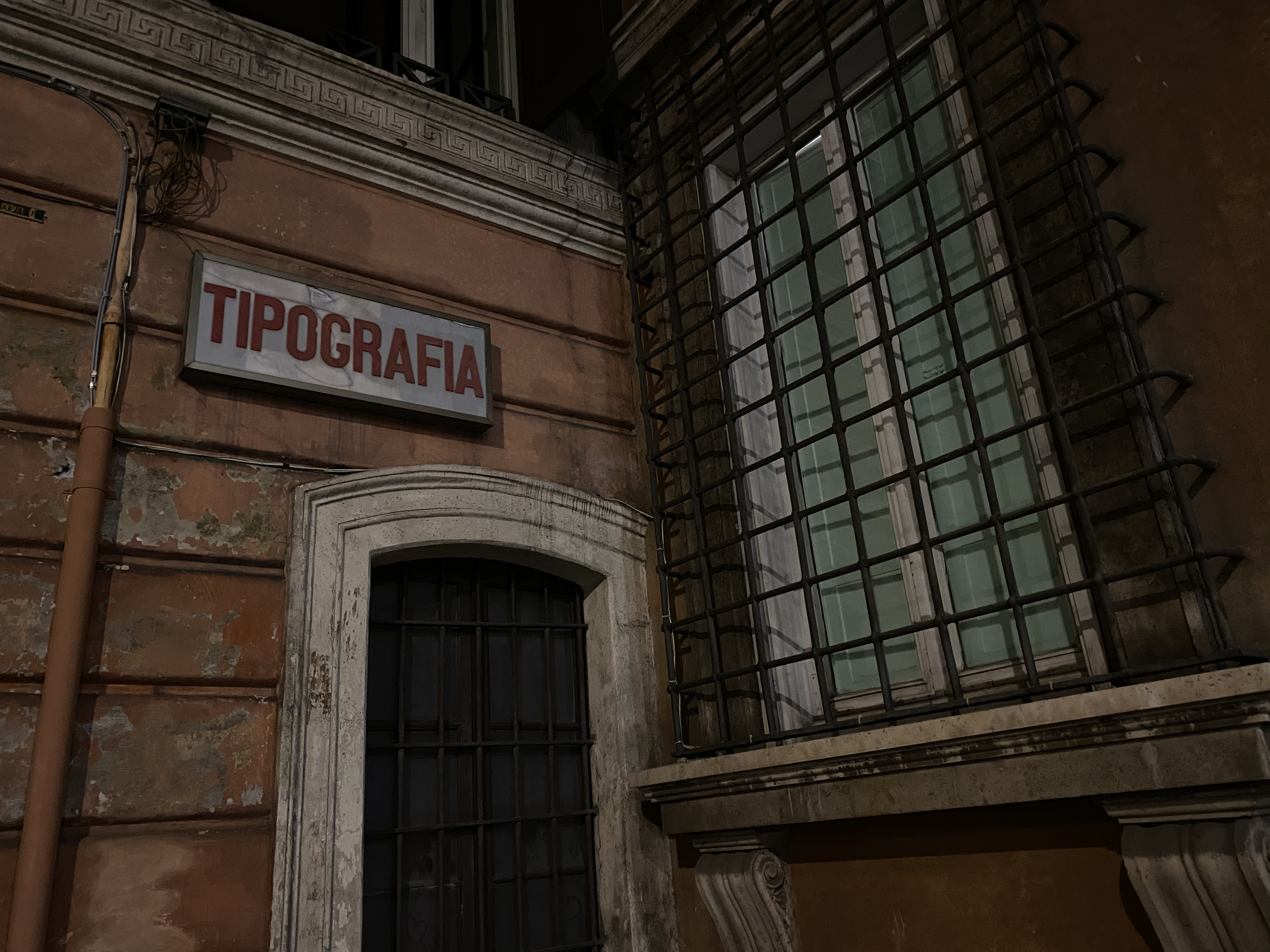 It’s an unremarkable subject, but pay attention to what happened with night mode (in handheld mode): 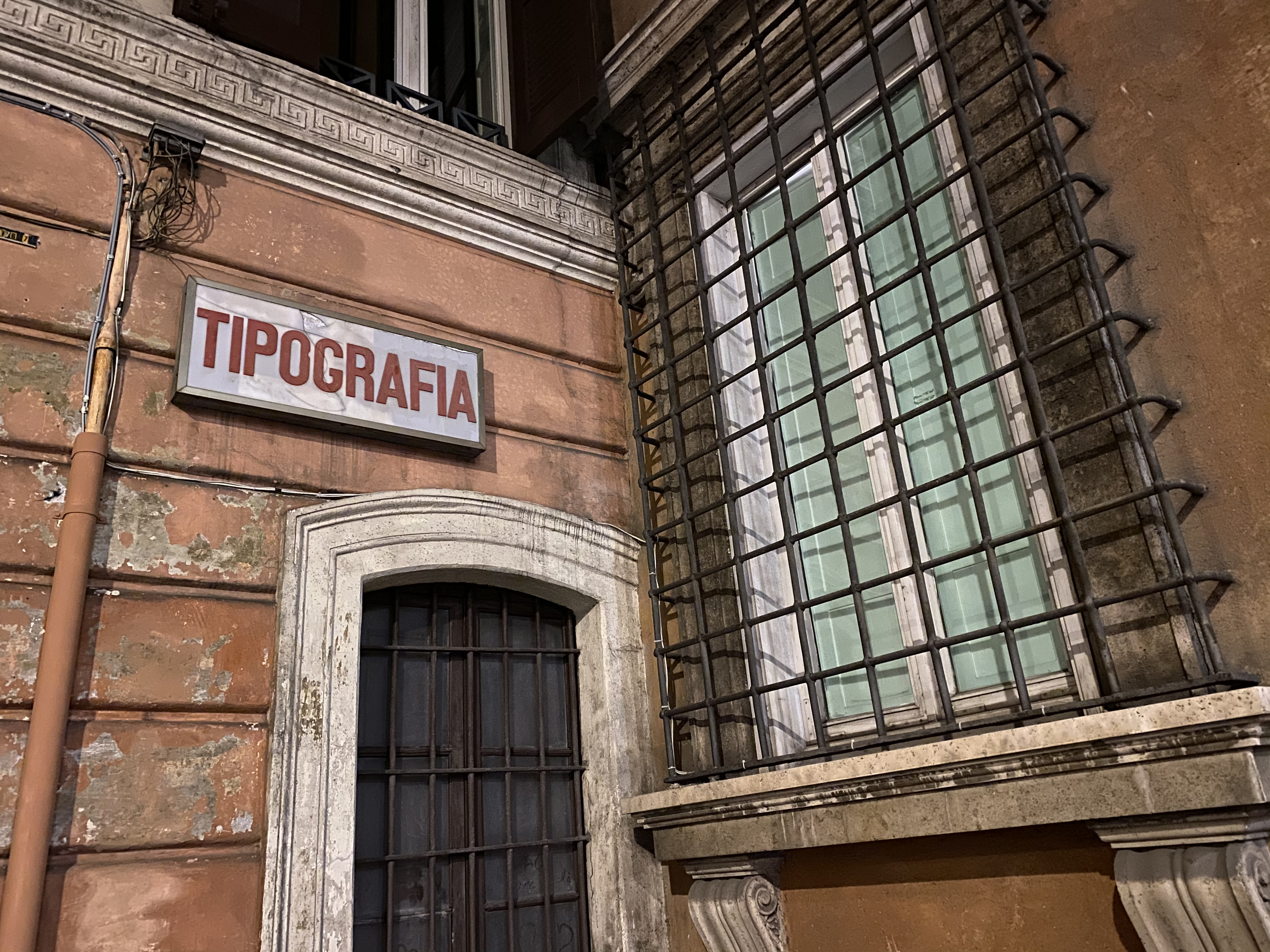 Now, some people may like the effect, and the camera surely did an impressive job maintaining clarity and color consistency; for my personal taste though, the iPhone overused night mode in this particular case since the photo could pass for an afternoon shot if I didn’t tell you it was taken at night. 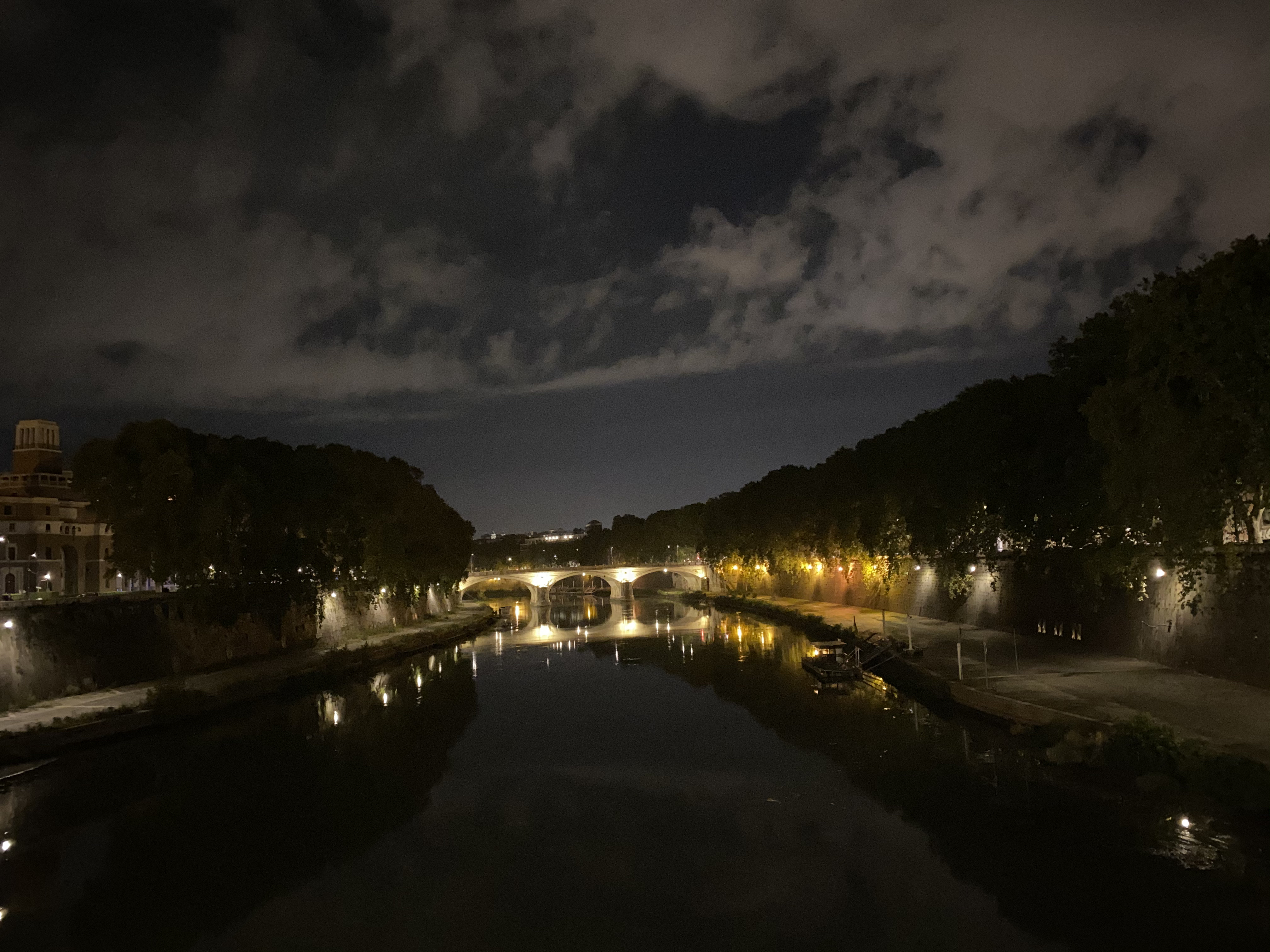 In the night mode version, the iPhone’s software changed the scene’s brightness and colors so much, it looks like the photo was taken at dawn instead of 1 AM. The sky is too bright, the river has become impossibly reflective, and the trees on the right side are so green, it’s almost as if a rising sun was casting light on top of them. This is a good example of night mode going too far: 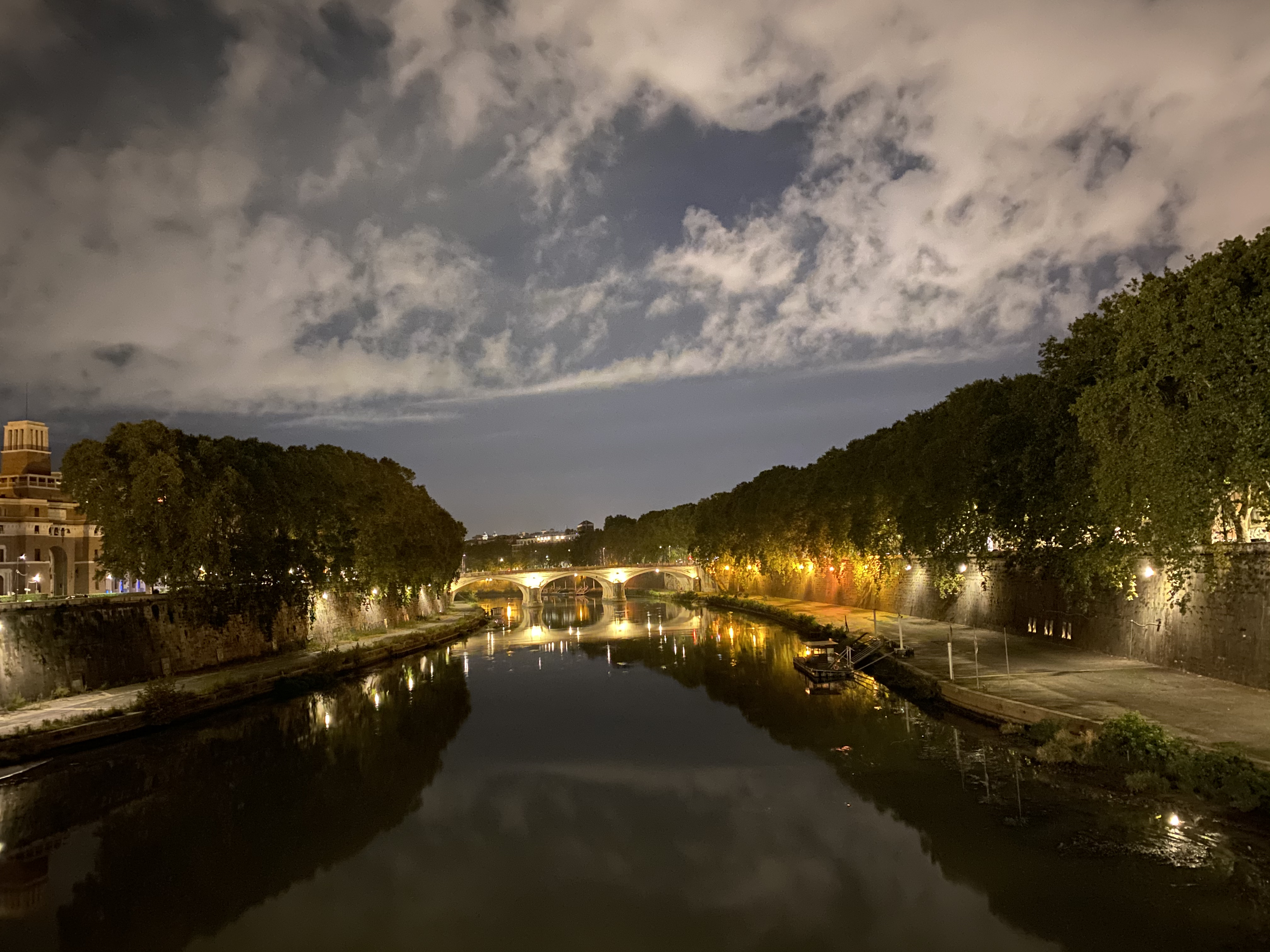 Fortunately, this was an isolated fumble. In reviewing the hundreds of shots I took around Rome at night, I noticed a common theme in all night mode photos: iOS 13 used night mode judiciously most of the time, without any assistance required on my end, producing photos that didn’t feel fake and which retained their original personality. I was consistently impressed by the amount of detail and clarity from each night mode shot – which confirms how Apple’s night mode does much more than just “pump up the brightness”.

The Trevi Fountain is always well-lit at night, so night mode wouldn’t be absolutely necessary to capture it. But with night mode enabled, I got that extra balance and soft illumination throughout the scene that makes the fountain and its Corinthian backdrop pop off the screen: 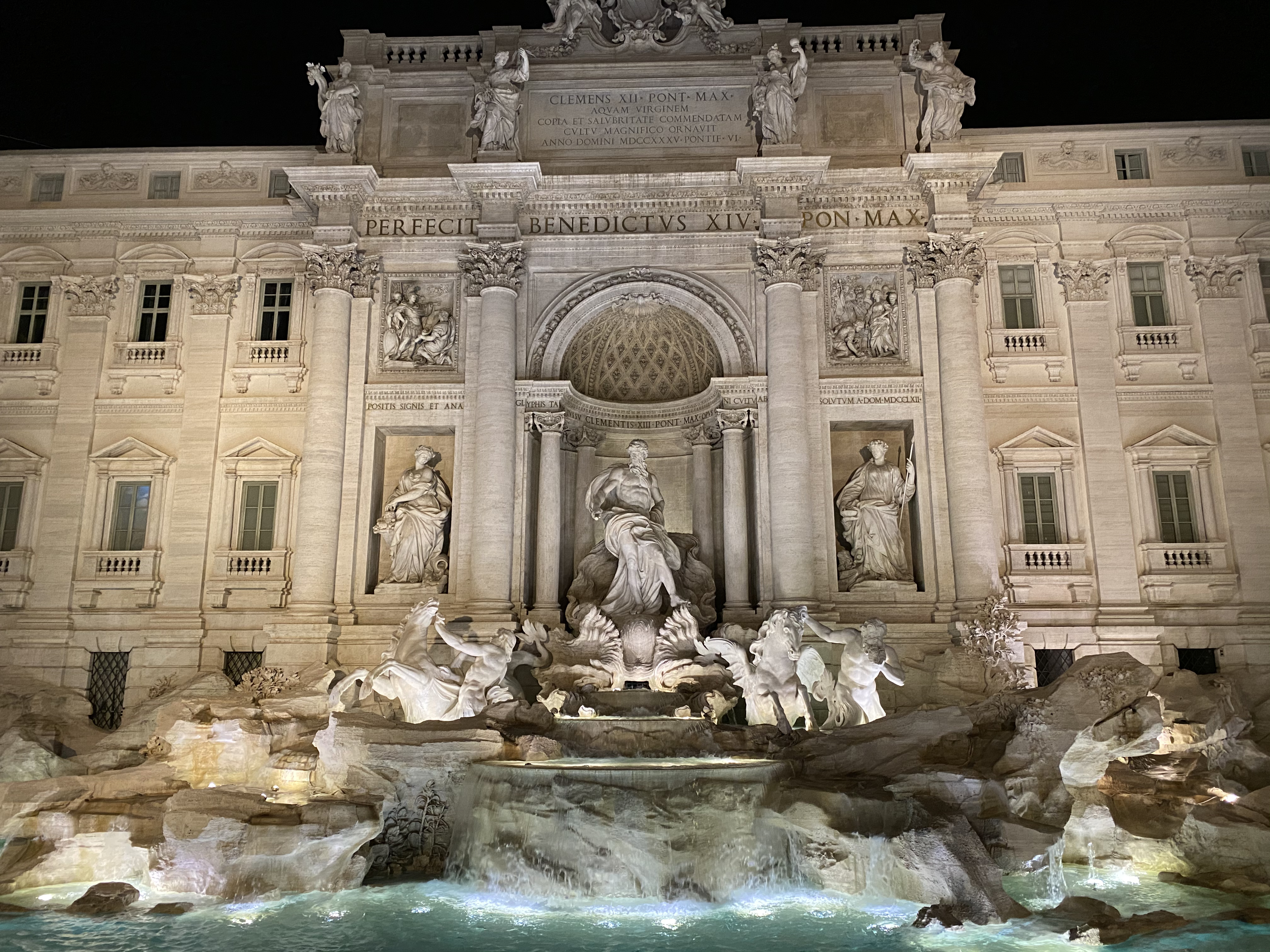 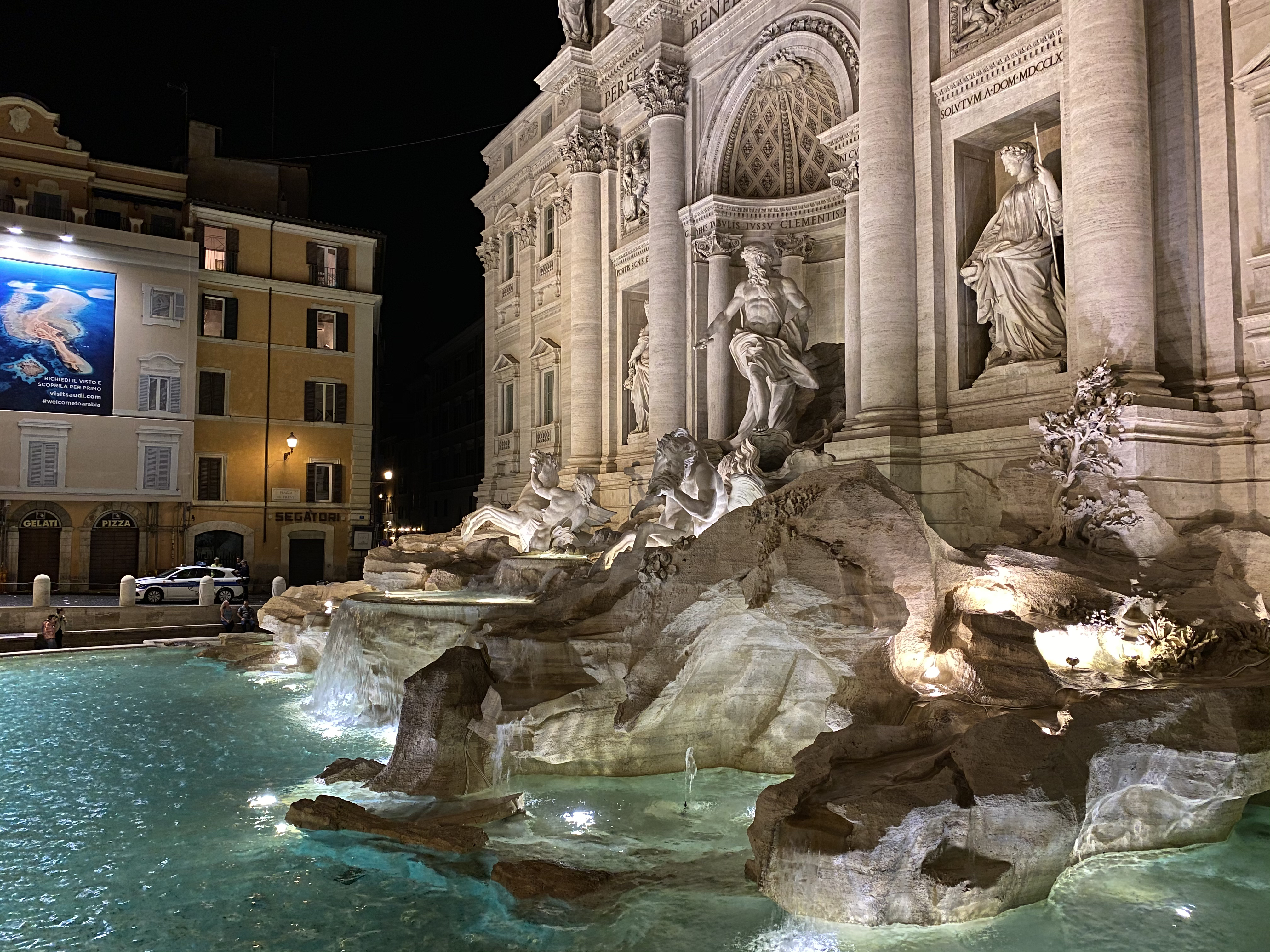 Even with night mode disabled, however, the artificial lights installed inside the Trevi Fountain provided enough light to capture good shots. Here’s one taken with the telephoto camera: 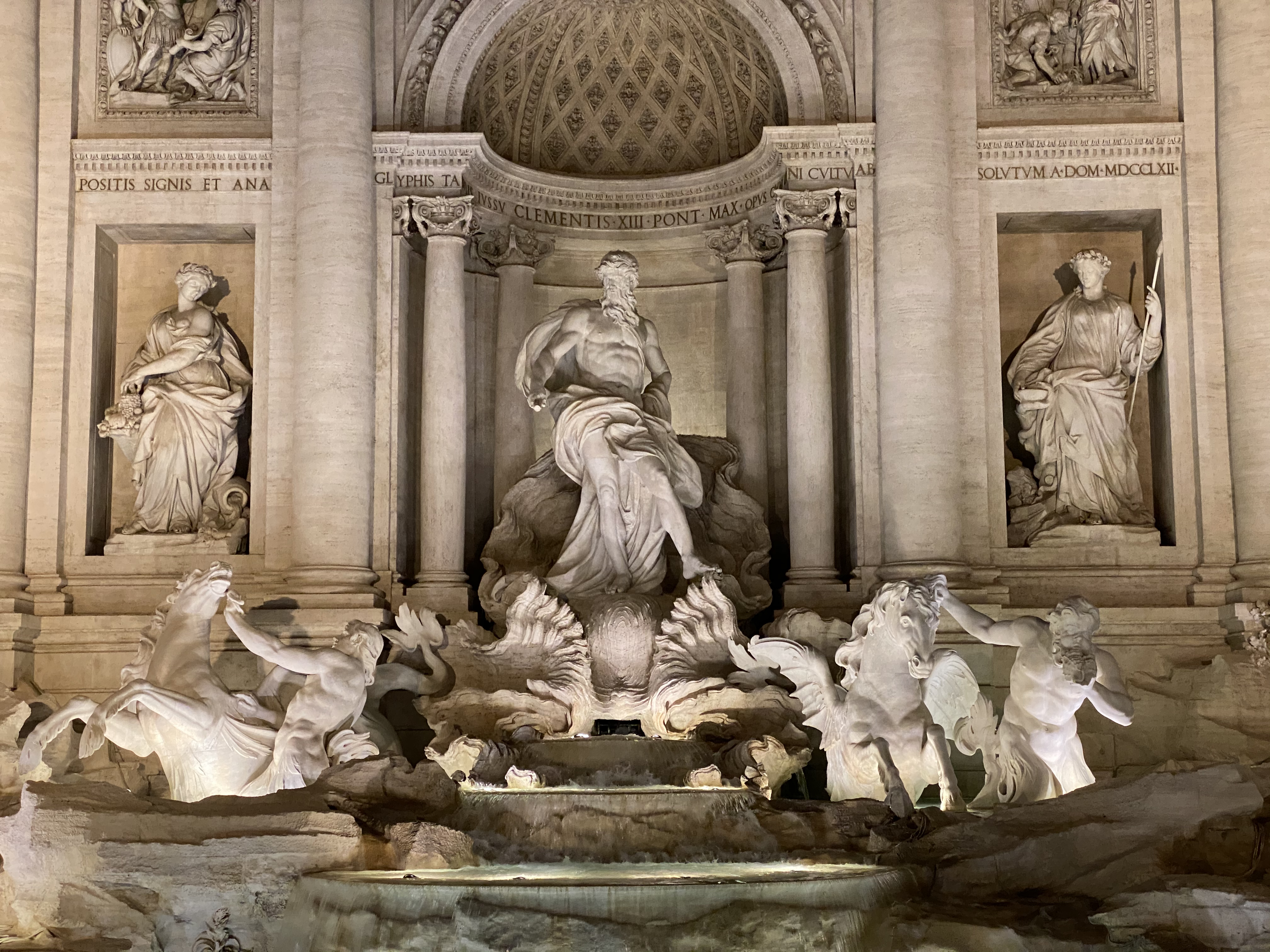 Out of curiosity, when I visited the Trevi fountain again a few days later, I wanted to take a daytime shot similar to the one above and compare the details captured in two different times of day. I find it fascinating how, despite clear weather and plenty of sunlight, the night photo mode contains sharper details for the arch above Oceanus, the pilasters, rockwork, and exedra behind the statue. 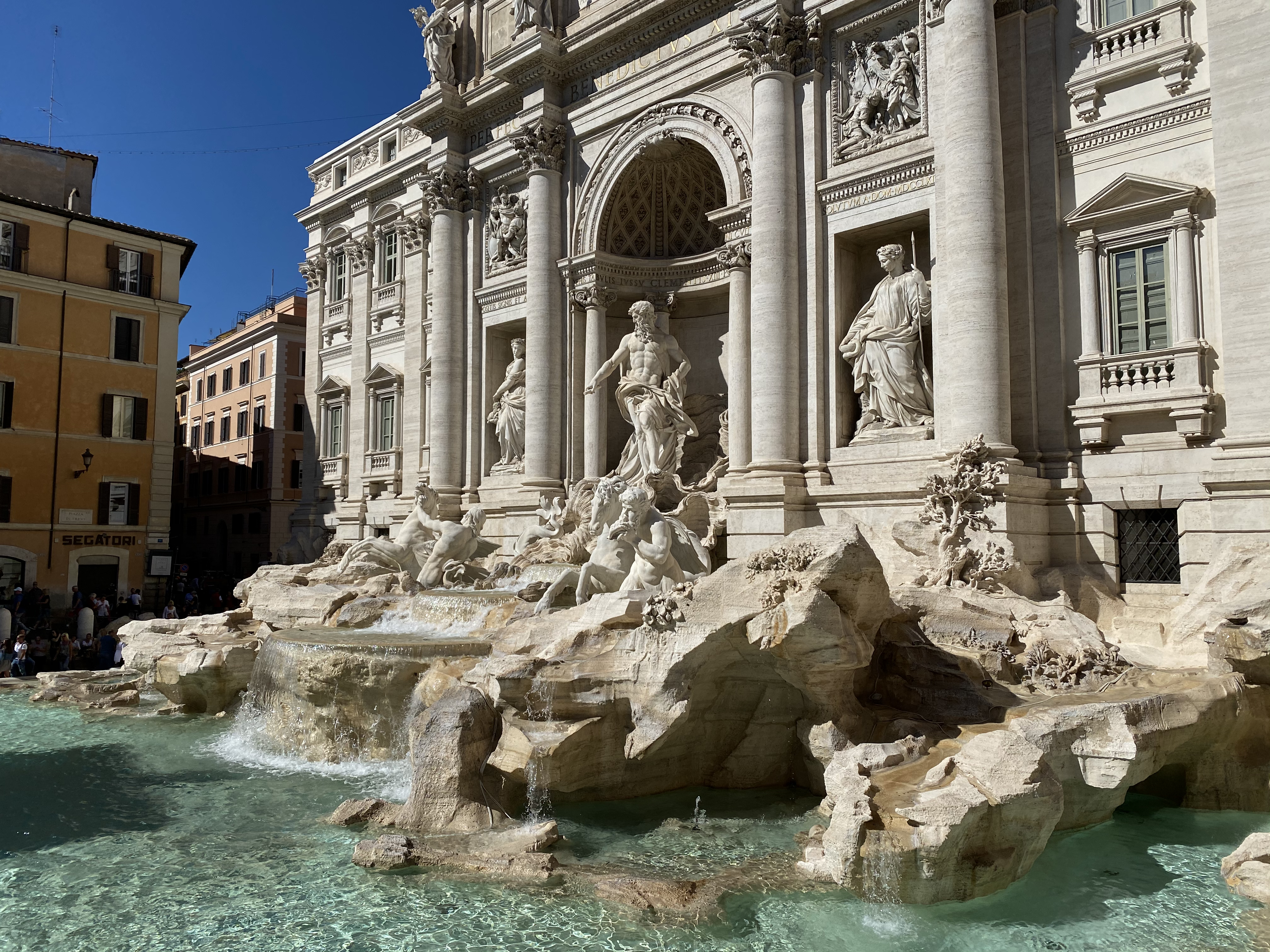 I also used night mode to take this beautiful shot of Castel Sant’Angelo, another highlight from my nocturnal Roman adventures: 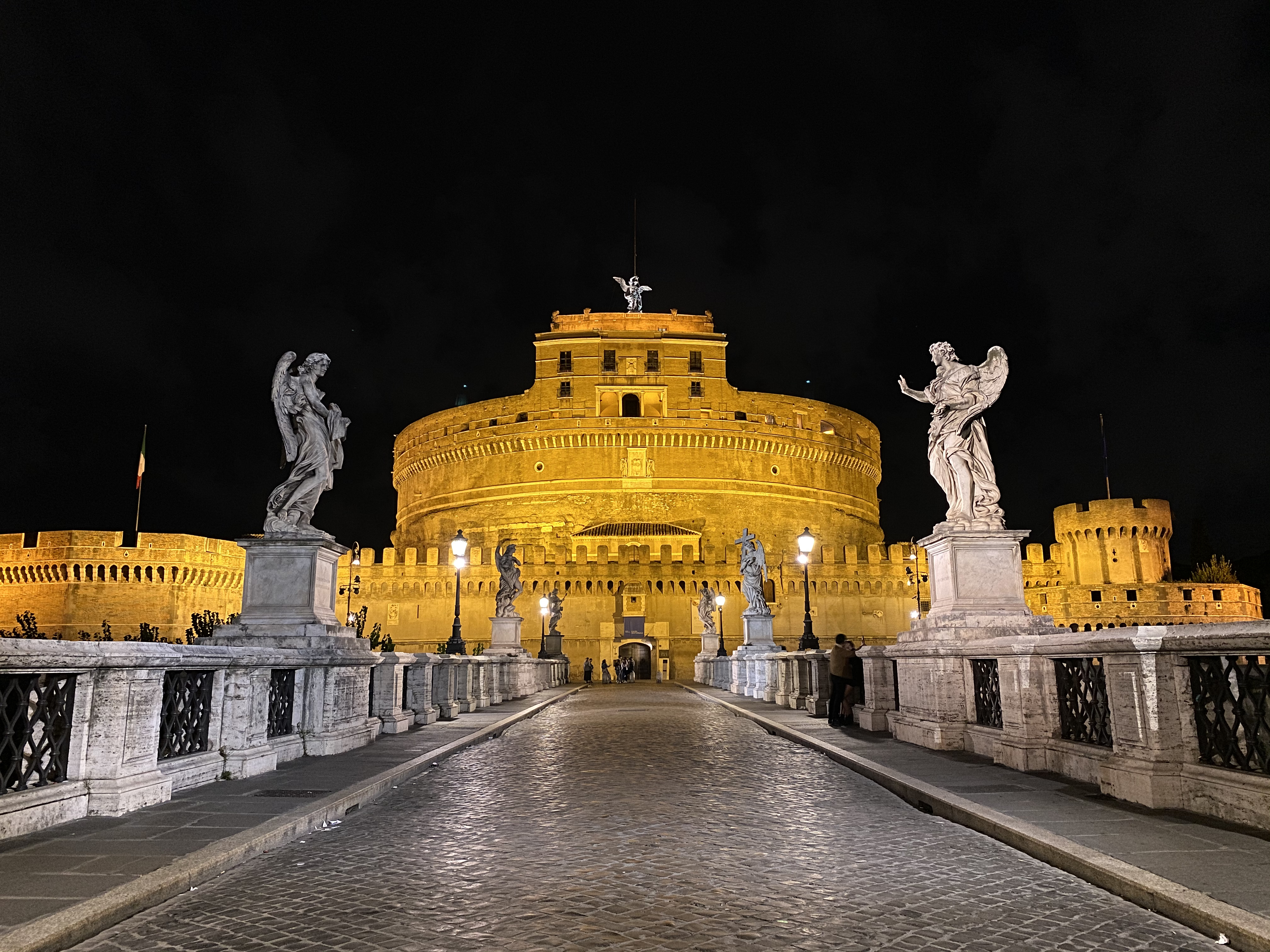 To give you an idea of how this picture was taken, here’s the shot behind the shot, taken by Silvia using an iPhone 11 (wide camera, handheld mode): 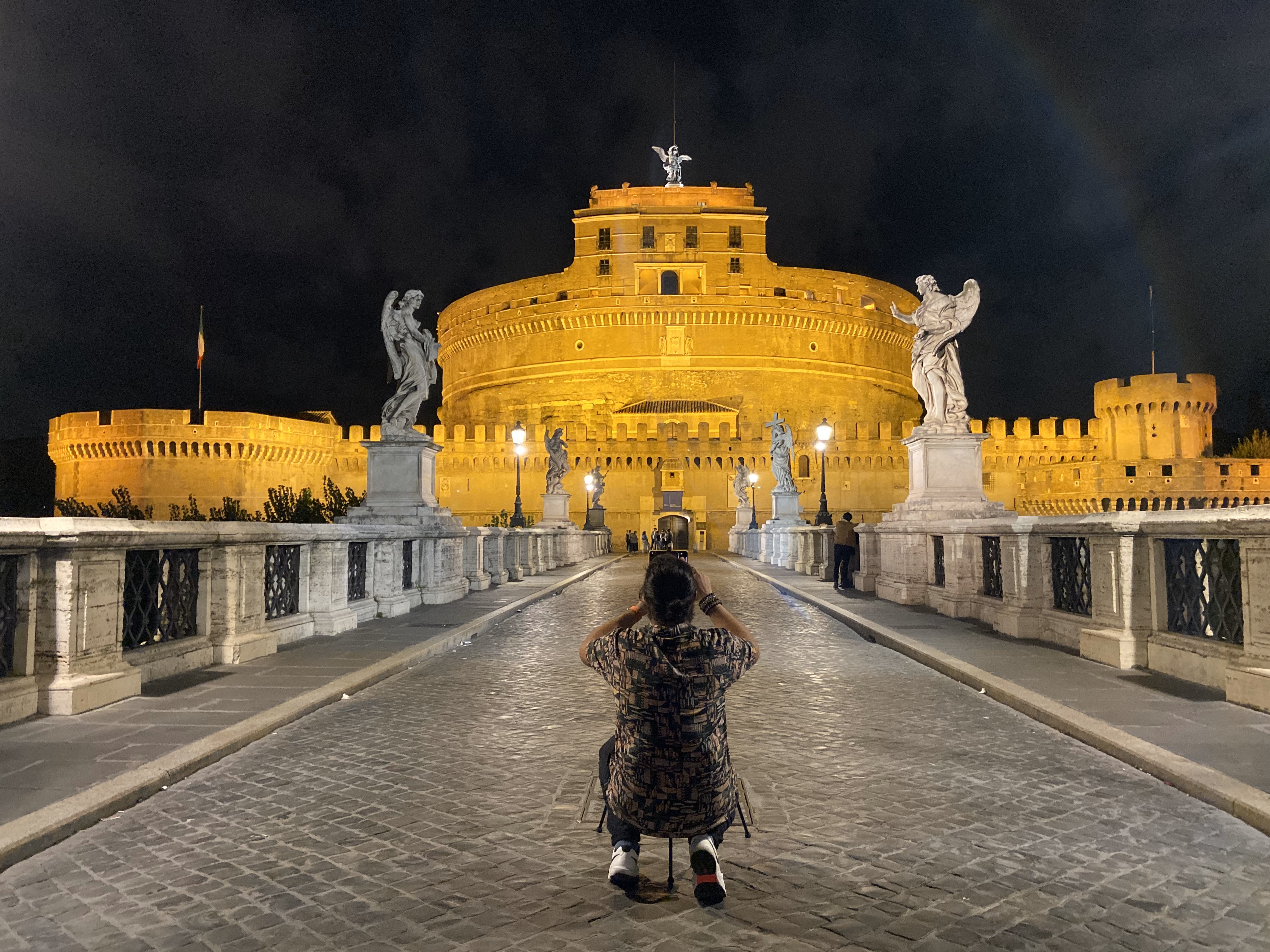 Behind the scenes at Castel Sant’Angelo.

Also at Castel Sant’Angelo, I like how one of the angels from Ponte Sant’Angelo (specifically, Girolamo Lucenti’s Angel with the Nails) turned out. Here’s the night mode version, taken in handheld mode with the wide camera: 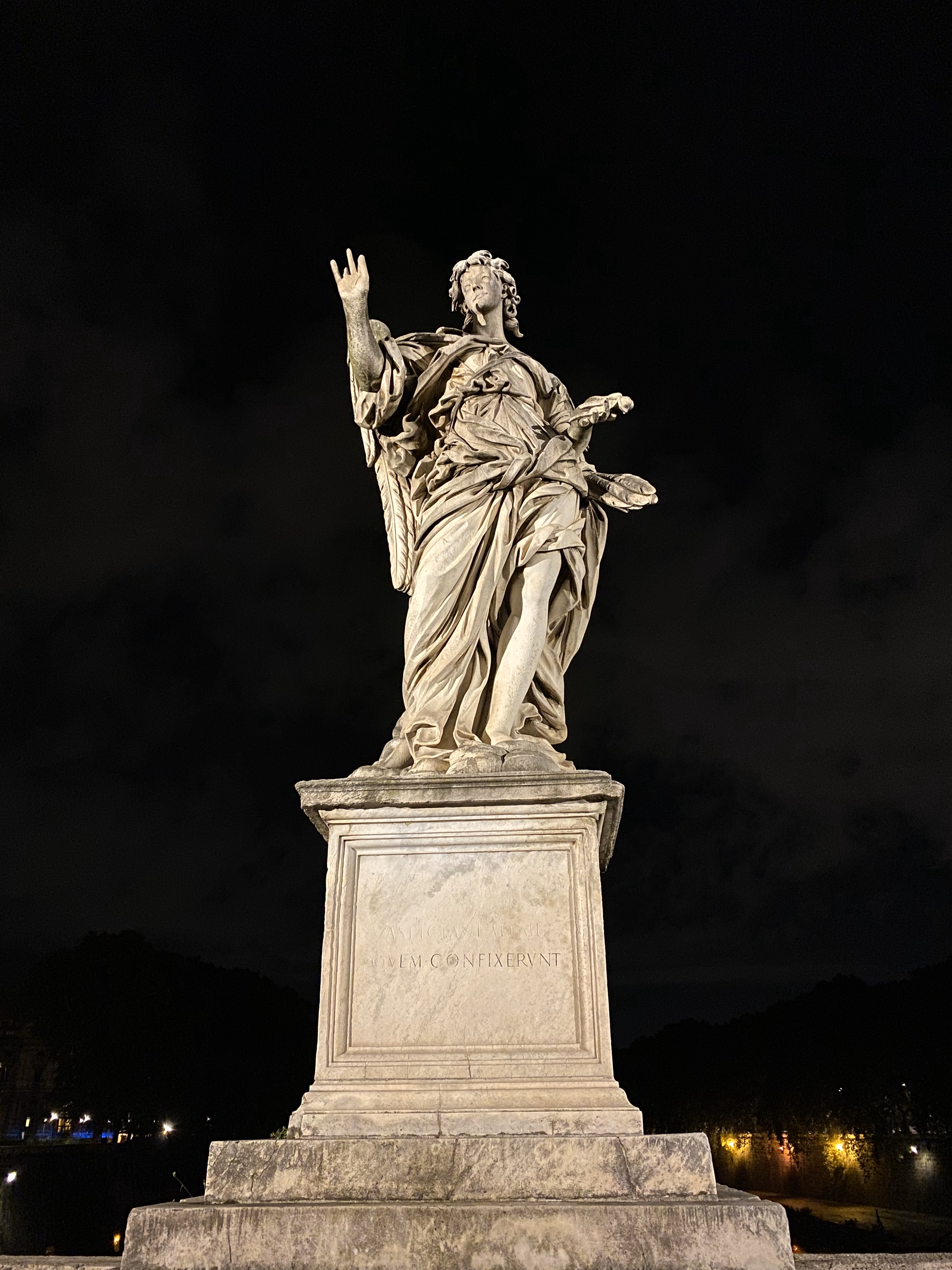 Angel with the Nails, wide camera, night mode on.

But I also like the (slightly darker) telephoto version with night mode disabled. The dark sky in the background looks great on the Super Retina XDR display: 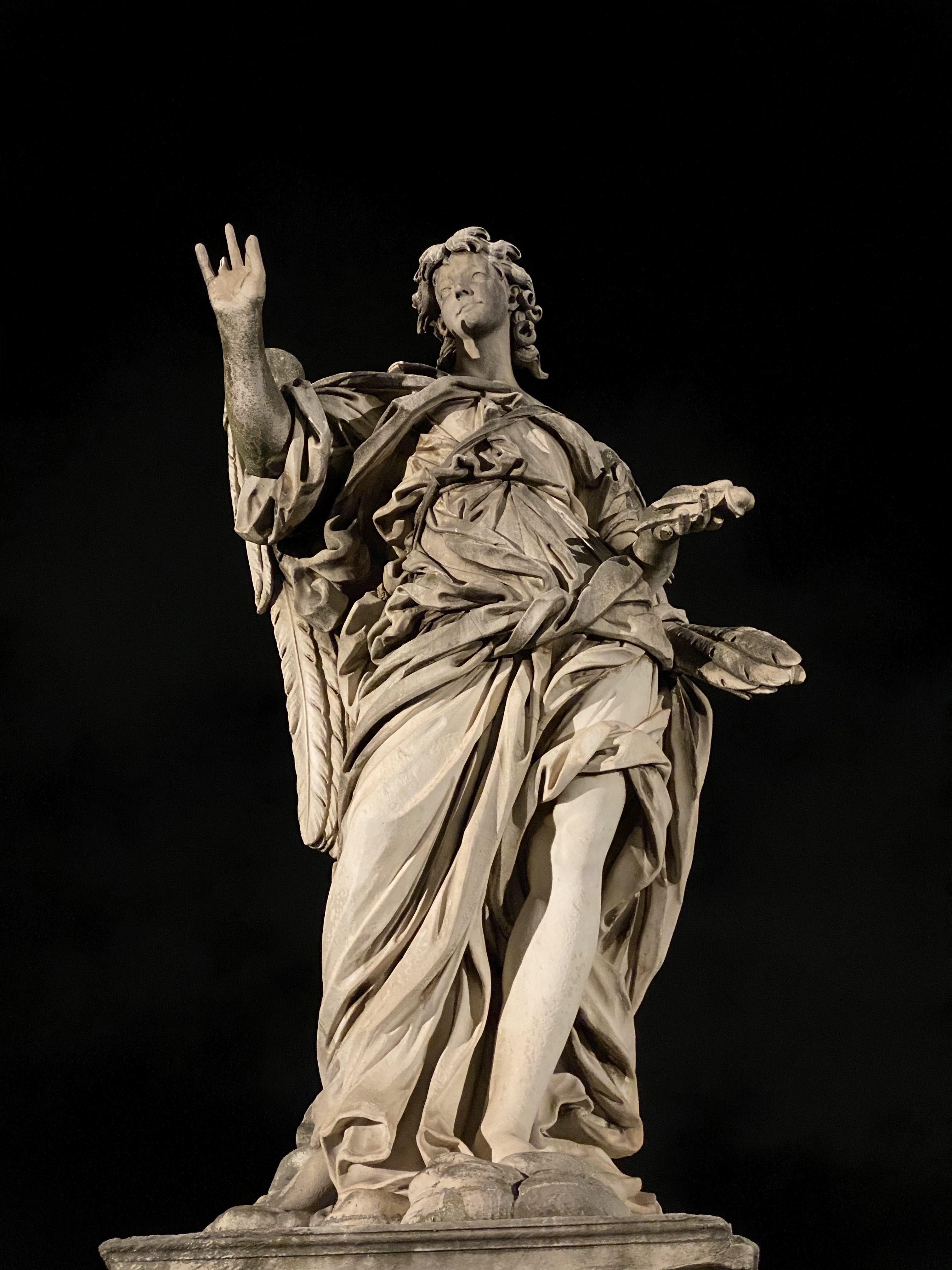 And again, for context, here’s how both shots were taken, as seen from an iPhone 11: 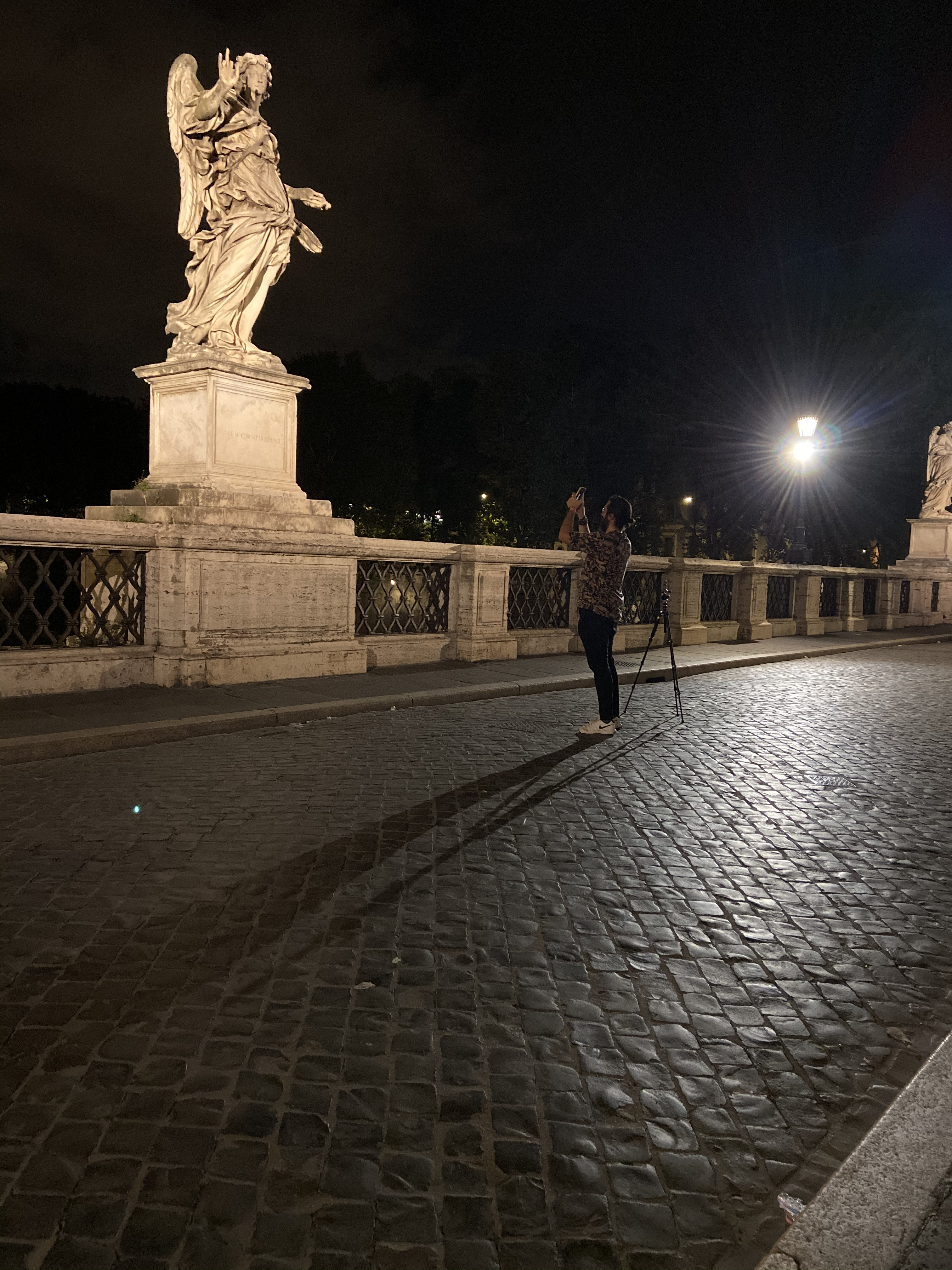 Behind the scenes at Ponte Sant’Angelo.

After Castel Sant’Angelo, we walked to Via della Conciliazione, which was effectively empty at 1 AM. That allowed me to take this shot of the thoroughfare with St. Peter’s Basilica in the background: 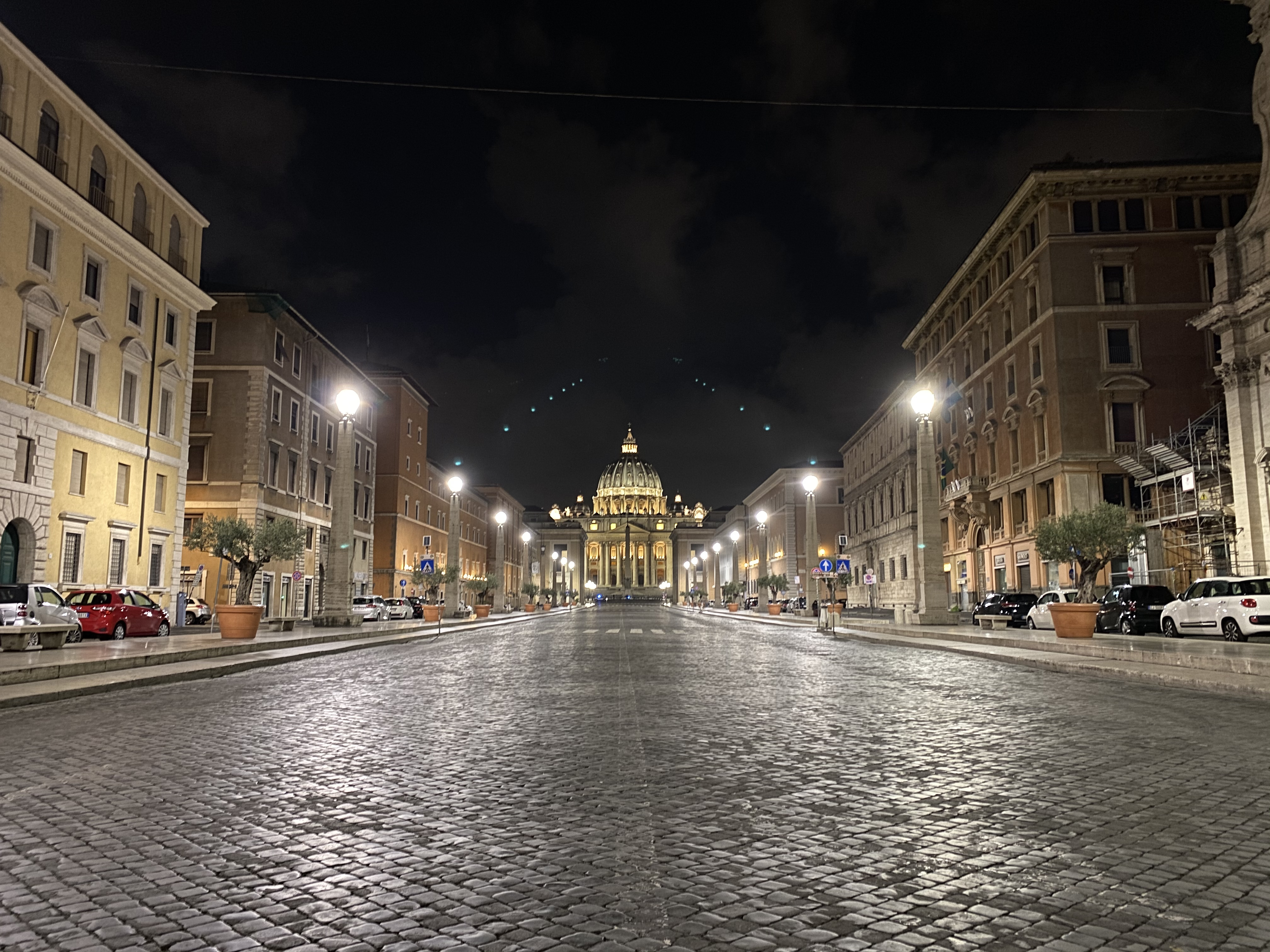 I’ve found night mode well-suited for close-ups too, as demonstrated by this picture of the Fountain of the Four Rivers in Piazza Navona: 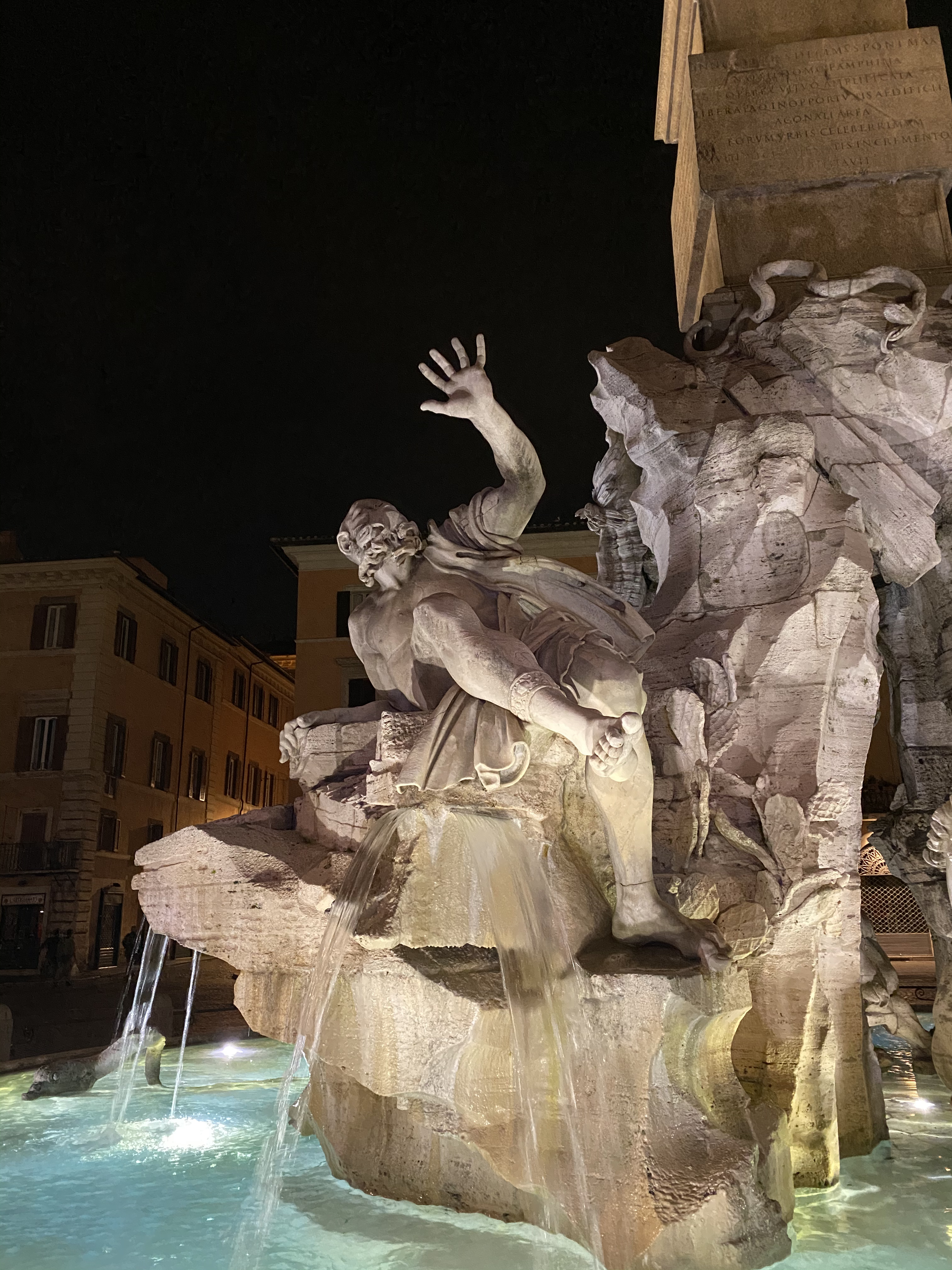 Detail of the Fountain of the Four Rivers, wide camera, night mode on. (Pictured: river god Río de la Plata, scared by a snake. This fountain is full of metaphors and allegories.)

And if you were wondering: with night mode disabled and a smaller aperture, you get an epic perspective with the ultra-wide camera, but the entire scene is fairly dark: 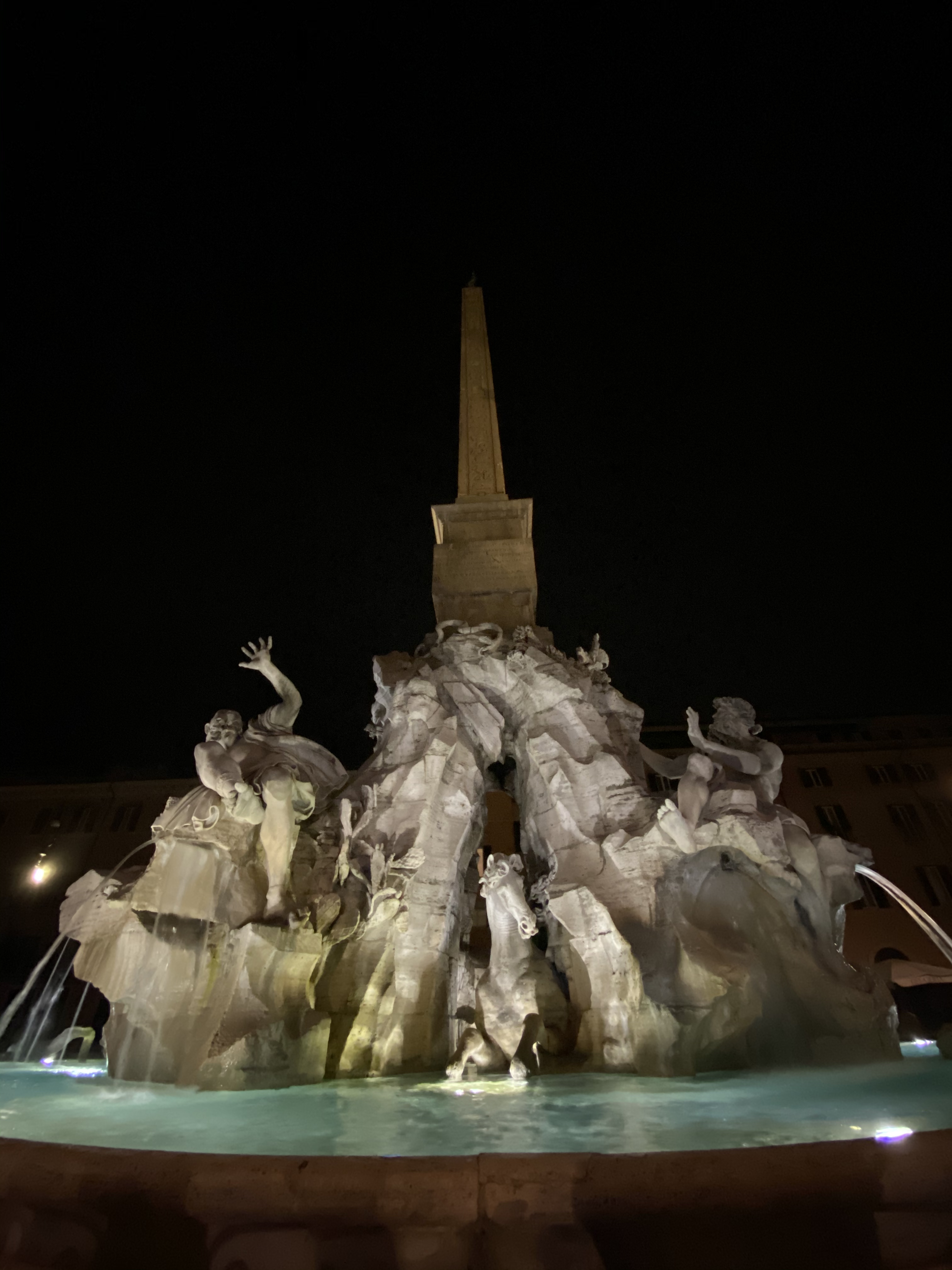 As I’ve mentioned before, I strongly hope night mode for the ultra-wide camera is on tap for next year’s iPhone camera upgrades.

In case it’s not clear from all the photos in this story, I love using night mode, which I believe consistently hits the sweet spot of “dark scene, but with better illumination”. I especially find it impressive when night mode can extract details out of a picture that the human eye cannot see in normal lighting conditions, but which are consistent with what would happen if there was more light available.

Night mode has given my iPhone super-vision abilities, allowing it to reinterpret dark scenes and optimize them for a more enjoyable viewing experience. With night mode, I don’t have to care about photography concepts such as ISO or shutter speeds: I can just take a walk around Rome at midnight and let the iPhone 11 Pro figure out what to do. For a first take on this feature, night mode’s results are already spectacular.